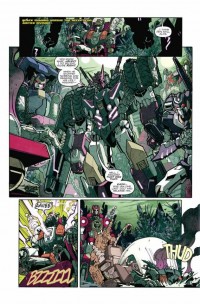 The official Transformers facebook page has posted their weekly creator commentary for IDW's Transformers: More Than Meets The Eye Ongoing #7. Writer James Roberts gives us his insight into the first five pages below. Pick up your copy today!

PAGE 1- The Decepticon Justice Division (D.J.D.) had had a few mentions in other Transformers publications you’ve written. Now we finally see them here in action. Can you tell us about where the idea for them came from?

JAMES ROBERTS: The D.J.D. were first mentioned in issue 1 of Last Stand of the Wreckers; Springer refers to a mole within the DJD. That’s all you get, one mention. My co-writer on Wreckers, Nick Roche, came up with the name but we never discussed who the DJD might be or what they might do.

When I came to write “Bullets,” the short story featured in the Wreckers trade, I decided to revisit the D.J.D. What I liked most about their name, for fairly obvious reasons, was the word “justice.” I got to thinking about what justice might mean in the context of the Decepticon army. What if justice meant vengeance or retribution? What if a name that conjured images of policing or righting wrongs had a darker, more horrific connotation? And so the D.J.D. became a group of Decepticons who hunt down and punish deserters, turncoats, and incompetents—basically, anyone who would compromise the realization of Megatron’s goals.

Through their actions they keep the rest of the Decepticons in check. If you know the D.J.D. are going to hunt you down, you’re less likely to quit or betray Megatron. So the D.J.D. are conscious that they have a reputation to uphold; namely, that they are terrifyingly sadistic killers.

The idea of there being a mole in the D.J.D. was explored in “Bullets,” where we discovered that this undercover Autobot agent, Agent 113, sends intelligence reports to his superiors by firing special info-laced bullets into Autobot badges (specifically the right eye socket).

I decided early on that the D.J.D. should be one of the “big bads” of MTMTE. I thought the best way to “sell” their dangerousness was through other characters—by showing that even people like Drift, who can handle himself, were afraid of them.

PAGE 2- Poor Black Shadow is getting, well, fried here. These guys seem to be named after Cities on Cybertron. What was your thinking behind that? And why choose Black Shadow for this scene?

JAMES ROBERTS: They call themselves after the first five cities to fall to the Decepticons after the war broke out. So, their names are freighted with significance.

The D.J.D. are the ultimate Decepticon loyalists. They passionately believe in Megatron and his ideals and so everything they do and say is steeped in Decepticon culture and iconography. Also, by giving them codenames we can have some fun down the line with regards to who they really are. The D.J.D. has a rolling, shifting line up. If and when Vos dies, they’ll recruit someone else and give them the same name. And it was in this way, no doubt, that Agent 113 got onto the team.

I chose Black Shadow for two reasons: firstly, regular readers will know that he is a Phase Sixer (i.e. a phenomenally powerful Transformer). By beating him, the D.J.D. demonstrate what a serious a threat they pose to anyone out there. Secondly, Black Shadow had a brief cameo in Wreckers, and, as I guess everyone knows by now, I like referencing old stories.

PAGE 3- 3 pages in and we’re seeing just how brutal and nasty these guys are! How much worse can they get?!

JAMES ROBERTS: The only acceptable response to that question is, “Much.” You’ll see. They each bring something to the team, and usually that “something” is related to their destructive capability. For example, Helex has a smelting pool built into his chest. And Tesarus’ very torso is lined with drills and blades designed to mutilate his victims. The others have special talents too but you’ll have to wait a bit longer to find out what they are.

PAGE 4- We’re seeing more or less the bible that the D.J.D. follow. Are these true believers or have they simply been manipulated by words, as so many others have?

JAMES ROBERTS: Their leader, Tarn, absolutely believes in what Megatron is trying to achieve. He venerates Megatron and considers himself something of a Decepticon scholar- an expert in the Decepticon school of thought. He has read all of Megatron’s masterworks, not just “On Peace,” and is fond of quoting them prior to killing his prey. As you can see!

PAGE 5- Black Shadow goes out with, quite literally, a bang. And the DJD simply pick their next target and move on? Can you say anything more about these individual bots and what they are thinking?

JAMES ROBERTS: In these first five pages the focus, deliberately, is on Tarn. He does the introductions, essentially. They move on because their whole modus operandi centers on The List—literally, a list of targets that they work down, methodically, one by one.

We’ll certainly be finding out more about Helex, Tesarus, Koan and Vos as the story unfolds. Suffice to say that there may be more going on than meets the eye. And thank you for giving me the opportunity to say that.

adds a nice angle to things.

im really looking forward to this book. that bit with tarn coaxing blackshadows spark to explode was the closest so far james has got to sending a shiver down my spine.

quickmixed wrote:This was a good read. I knew the DJD were names after cities but I didnt know they were the first 5 to fall.

It was also in the fourth issue of MTMTE, when Rewind quick-plays the history of the war to Tailgate.
Re: Transformers: More Than Meets The Eye Ongoing #7 Creator Commentary (1404423)
Posted by Tigertrack on July 26th, 2012 @ 10:42am CDT
I need this now. Skipped reading the comics piece because I want to experience it all together.

Enjoyed the commentary a lot. And I too like the creators doing this. It's something you used to get in trades only, or second versions of trades, but now we get them immediately. Hopefully the commentary will also be included in the trades.

Certainly makes it like a director's cut of a movie in this case even if it is only the preview pages.

Haven't read the issue yet, but I am sure based on all previous MTMTE issues that Overlord is now on the list (and since they canned Black Shadow...

), probably Drift too. Be cool if they come to Cybetron in RID and take on Starscream and company...