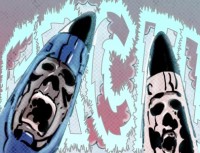 Still, no criticism to level except that it feels like the first page of a full comic book rather than a 3 or 4 part Mosaic.

Should be an interesting face-off, especially if Bludgeon was in fact one of Yokai-tron's students; it was hard to make out all the busts in '5 Servos of Doom'. The greatest Metallikato master vs. the badass who sorta' cheats his way to the top with all his upgrades. Yet Bludgeon's tech spec mentions his armor having a ton of gadgetty enhancements I can't recall him ever using in media, so maybe they'll come into play and make this a really interesting fight, worthy of any extra length!
Re: Transformers Mosaic: "Bounty on Bludgeon." (1379899)
Posted by turbomagnus on May 14th, 2012 @ 8:26pm CDT
The artwork is so out-of-proportion as to be cariacturical. The background colors are rather garish and inconsistant... And the 'skeleton' faces on the dead Decepticons are - to be perfectly blunt - ridiculous. A human skull has that appearance due to the decomposition of soft tissues - nose cartilage and eyes - something that a Transformer, made out of metal, lacks.

About the only thing I can say for it is that the storyline has potential; Autobot Bounty Hunter against honorable Decepticon Warrior could be interesting if done well.
Re: Transformers Mosaic: "Bounty on Bludgeon." (1379913)
Posted by MINDVVIPE on May 14th, 2012 @ 9:22pm CDT
Haha, Dirge and Ramjet look like white-board markers from hell.

Mindmaster wrote:So I'm confused; does this take place in G1 or in the Movie line?

From the looks of Dirge and Ramjet, G1. I understand your confusion, but it does makes sense: according to the designers, RotF Bludgeon can easily be repurposed as G1, which actually happened with RotF Lockdown. Lockdown's design was used for an already drawn out G1 Lockdown on Hasbro's request, he appeared in Drift's stories.
Re: Transformers Mosaic: "Bounty on Bludgeon." (1380117)
Posted by Stormrider on May 15th, 2012 @ 5:02pm CDT
I like the concept but want to see more to understand. My one question - is Bludgeon hanging out with Dirge and Ramjet? Or is Bludgeon a prisoner being guarded?