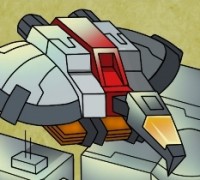 Check the Seibertron.com mosaic database for all previous mosaics.

Colors by;
Eman B. Zubia Rated X wrote:Interesting, I didnt even realize that was Octane until they said his name.

Same here, Seibertronion Brother.
Re: Transformers Mosaic: "Bureaucrat" (1227153)
Posted by Bumblevivisector on May 23rd, 2011 @ 10:49am CDT
Yeah, I wasn't sure if he was Octane or Ratbat until the he talked to Laserbeak either. Neat idea to have his massive wings droop down so he can fit through doorways.

His personality here seems to mesh with his tech spec and comic portrayal a tad more then how he acted in "Thief in the Night" and "Starscream's Ghost", but there isn't a lot of evidence either way. Whichever continuity one prefers, it's a nice, solid, prewar slice of life.

Bumblevivisector wrote:Another 'Con who likely had a similarly disgruntled attitude in his pre-war job was Windsweeper, the anal-retentive Triggercon who ran Cybertron's sanitation department like a fascist dictator. Has anyone done a mosaic about him actually locking up other TFs for leaking oil in the street (perhaps Apeface, Blot, Horribull, and/or Skalor), or freaking out when a Junkion or Landfill threw garbage at him?

His Cybertronian version is known, thanks to Don Figueroa:

We plan to feature him in a Starscream multi-pager.