Transformers Mosaic: "Down and Out..." 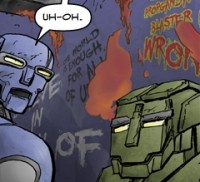 DOWN AND OUT IN DOWNTOWN KAON IIRC, "Empty" was slightly derogatory term form Transformer neutrals who lived in the "Dead End" (this was slightly before the Stunticons were created), a slum that likely sat between the destroyed Autobot capital Iacon and the Decepticon capital Polyhex. Empties were often in such poor shape they couldn't transform, and therefore couldn't fight or work, so 'Cons routinely captured them and tossed them into the smelting pool.

This was all introduced in Marvel US #17, and these two are based on specific empties. (I don't remember exactly how they looked in Megatron Origin) The blue guy seems to be a combination of Telus and Rotorbolt, both killed by the Decepticon Ferak, and the green guy appears to be Scrounge's informant Wheezel.