Transformers Mosaic: "Following in the Footsteps." 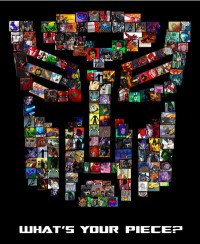 FOLLOWING IN THE FOOTSTEPS

Hmmm, I guess that thing about the coneheads being in the Nemesis at the end of Beast Wars isn't canonical since it didn't end up in the ep, so they could have come over on the space bridge before 'Dinobot Island', just like in issue 21, making this the best type of G1 mosaic: one that could take place in cartoon or comic continuity!

...oh, wait, in the comics there were no female TFs until Arcee's creation in '95. Unless there always were a few female TFs but no one ever realized it because the concept of gender was so meaningless to their species...

Ah, who cares? Slipstream still ret-cons into G1 smoother than Lugnut...
Re: Transformers Mosaic: "Following in the Footsteps." (1201180)
Posted by Trikeboy on March 28th, 2011 @ 10:55am CDT
The story is a possible G1 addition but the art in this put me right off, sorry. They tried to mix G1 and Animated and this time it didn't work besides Slipstream's Tetrajet, which does look great. My problem is the other Seekers. What's up with the coneheads? Not only do Dirge and Ramjet have the same wings, they are also upside down. Thrust looks like he is standing on a box for that shot. I'm sorry if I offended the people who created this but that's how I see this one. This one is best left behind.
Re: Transformers Mosaic: "Following in the Footsteps." (1201193)
Posted by Tigertrack on March 28th, 2011 @ 11:08am CDT
'Like'

And artistic license could allow an artist to flip wings and so forth, especially on Cybertronian robot mode (pre-Earth).

BUt yes, it does seem to have a problem being in only one of the existing continuities.
Re: Transformers Mosaic: "Following in the Footsteps." (1201302)
Posted by mattyc1007 on March 28th, 2011 @ 1:32pm CDT
I like, and on the artistic side. It works, very well actually. Its a style that I want more of thanks to animated

Re: Transformers Mosaic: "Following in the Footsteps." (1201338)
Posted by zer0das on March 28th, 2011 @ 2:42pm CDT
>The art style is decent, however, one should refrain from copy & pasting similar character models--at least have different poses.

>Story is interesting, though hardly compelling. "My name is..." gags are cliché and add very little characterization. Often times, one is told to demonstrate these personalities and attributes than opposed to simply stating them. This mosaic suffers from this attempt. Reframing the scene where there is action can help dig the script out of the ground.

Re: Transformers Mosaic: "Following in the Footsteps." (1201426)
Posted by GetRightRobot on March 28th, 2011 @ 4:31pm CDT
Great story. I guess it would be hard to live up to the awesomeness of the OG 3! Not tryin to be a jerk here, but the art seems a lil' bit phoned in... Still, very good snippet of TF storyline!