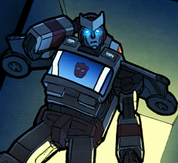 Posted 3 days ago
News Categories: Toy News, Movie Related News, Cartoon News, Comic Book News, Site News, Rumors, Event News, Digital Media News, Collectables, Game News, Sponsor News, Site Articles, Store News, Company News, People News, Press Releases, Sightings, Reviews, Unlicensed Products News, Auctions, Transtopia, Interviews, Knock Offs, Collector's Club News, Editorials, Heavy Metal War, Podcast, Contests, Book News, Top Lists
Click here to post your comment about this news story!
Re: Transformers Mosaic: "Guilt." (1346655)
Posted by Bumblevivisector on February 13th, 2012 @ 9:06am CST
Well, Furman's debut US issue was what got me into TF comics, so this brings back fond memories...but there wasn't really anything new besides the updated IDW character designs. Jose Delbo is far from my favorite TF artist, so I'd wondered how that issue would've looked if drawn more in the style of Geoff Senior or Dan Reed to ratchet up the horror element, but this art, good as it was, just seemed a tad flat for the material. The scene is finally, thankfully dark, which is something the original comic clearly wanted but couldn't pull off, but the deactivated Autobots didn't look damaged enough, and there were only 4 of them.

Perhaps the creator(s) of this strip just wanted to breathe new life into an old scene. Either way, pulled off with style and aplomb.