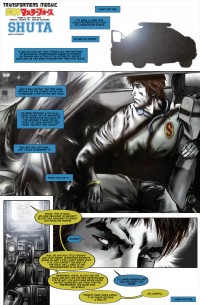 Special Thanks to:
Carlos Oliveros http://hombreimaginario.deviantart.com

It's weird how Hawk refers to Blood being more dangerous than someone like Wilder, as it was the Decepticon Pretenders who were the dumbest Cons and mostly comic relief when the Headmaster Jrs and the Godmasters came into play.
Re: Transformers Mosaic: "Human Component: Shuta." (957248)
Posted by DECEP on July 17th, 2009 @ 8:30pm CDT
Again, is a free interpretation of Masterforce. NOT to be compared with the animation, many concepts have been mixed, as some people age, the development of events or personalities, again, should not be compared with the version of the eighties of masterforce because these mosaics are one free version. Anyway if I remember correctly, Shut is the most I've changed, besides Cancer, I do not want kids in Masterforce, is unrealistic and ridiculous.

Surely if there were 24 pages of a comic thing many would be better explained or developed, but I have a page to explain and present a character both in personality, in psychology, intellectual development, past, factions, and historical situation.

In total there are about 25 Masterforce mosaics (sorry for you do not like), usually by a character and any conditions.

Again without comparing it with the animation.I only change what I do not like or believe in masterforce that has become redundant because of the passage of time.I also changed that even the personalities at the time, looked ridiculous, wait to see the mosaic of Wilder, but not compare with the animation Wilder.

Thanks for the comments!