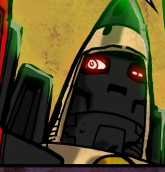 Plus Wingstun is a better name.

I did like the mosaic though and the art is great.
Re: Transformers Mosaic: "Living Death." (1151970)
Posted by Mindmaster on November 29th, 2010 @ 4:53am CST
Ha, that's hilarious! I expected the Predacon of the same name... wait a sec, there was a BW Predacon named Dirge, right?

Re: Transformers Mosaic: "Living Death." (1151973)
Posted by M3Gr1ml0ck on November 29th, 2010 @ 5:18am CST
Yes, some Preds and Maximals inherited G1 names, but it was not stated that they were the same characters.
I'm thinking Buzzsaw, Ironhide, Silverbolt 1, Prowl 1.
With Grimlock and Prowl 2, it was stated that they are the same character (well, Prowl 2 was... complicated).
Re: Transformers Mosaic: "Living Death." (1151975)
Posted by Windsweeper on November 29th, 2010 @ 5:29am CST
The IDW sourcebook suggests that the Prowl, Ironhide and Silverbolt who combine to form Magnaboss are the G1 characters. I hope that's true because Prowl and Ironhide are my favourite Autobots. Though it does conflict with the 6 movie.

Yes Dirge was a Predacon on Beast Wars 2. He shared a mold with Machine Wars Thundercracker and Skywarp, Botcon Waspinator and Robotmasters Wingstun. Oh there was also an RID repaint.
Re: Transformers Mosaic: "Living Death." (1151976)
Posted by M3Gr1ml0ck on November 29th, 2010 @ 6:00am CST

Windsweeper wrote:The IDW sourcebook suggests that the Prowl, Ironhide and Silverbolt who combine to form Magnaboss are the G1 characters.

That came later, and sounded a bit like a retcon (at least to me). I think J.Z. is following the original BW universe described in the toys tech specs (just my opinion).
Prowl 1 being the G1 character made TM2 Prowl a real chaos

I hope that's true because Prowl and Ironhide are my favourite Autobots. Though it does conflict with the 6 movie.

Maybe they were resurrected using the Matrix, or they became "ghosts" like Starscream and then gained a new body.

Yes Dirge was a Predacon on Beast Wars 2. He shared a mold with Machine Wars Thundercracker and Skywarp, Botcon Waspinator and Robotmasters Wingstun. Oh there was also an RID repaint.

I forgot that Timelines Dirge was an Insecticon with the body of BW Buzzclaw... not exactly the G1 Conehead we know.
Re: Transformers Mosaic: "Living Death." (1151977)
Posted by Heavy B on November 29th, 2010 @ 6:01am CST
YES. finally we get waspinator. the REAL one, not "wasp"
Re: Transformers Mosaic: "Living Death." (1151992)
Posted by Bumblevivisector on November 29th, 2010 @ 7:43am CST
Yeah, nice play off the Machine Wars mold, and Dirge seemed to get slagged in both TF:TM and '5 Faces Of Darkness' right afterward, but then showed up in good health in 'Ghost In The Machine', so I guess he did get blown up and bounce back more than your average 'con.

Back when BW season 1 was first airing though, didn't a lot of fanfic imply a theory that Waspinator was the reincarnation of Skywarp? They were the dumbest fliers of their respective generations, and Skywarp was also the earliest and yellowest version of that Machine Wars jet. The only time I recall Skywarp displaying resilience in the face of being blown apart is the end of 'Target: 2006', when Hot Rod painted him to look like Starscream (something that happened A LOT in the cartoon BTW) so Galvatron could be tricked into wasting him; something Starscream wouldn't survive, but apparently Skywarp could. That has a weird parallel to "Posession", possibly the birth of the theory.

But this mosaic makes even more sense; well done!