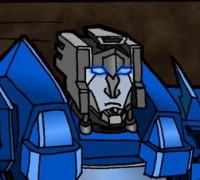 But I do love what they're going for, since in vintage G1 media, Blurr was usually just the Autobot who talked too fast, his super-speed-hero aspect only surfacing all too briefly in his commercial, and U.S. issue #66, the latter seeing Thunderwing hand his aft to him after a mere 4 panels or so.

wolverinetodd wrote:"They complain about how long the war has ragged on." I think that should have only one "g" to read raged. Otherwise, good.

Not really - local vernacular, at least in my area, includes "ragged on" to refer to things that have lasted long enough to just feel like they're dragging. Basically just like "dragged on", but without the "D".

If it SHOULD be changed, "dragged" on would fit the mood and feel of the sentence better than "raged on"
Re: Transformers Mosaic: "Relativity." (1414025)
Posted by First-Aid on August 27th, 2012 @ 6:39pm CDT
Very interesting concept, using Einstein's hypothesis that time slows down as the velocity of an object speeds up. I believe there was an episode of Justice League Unlimited in which the FLash sped up so much that everything else appeared to stop completely.
Click here to view additional comments about this topic at the Energon Pub Forums ...