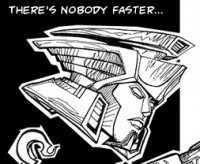 So,,,,can anyone make and share one of these? I've seen some really beautiful pieces and some stinkers. I might just try my hand at it and see if anything develops.

If I succeed in making something decent who do I send it to?

I heard a week or so ago that they were doing away with mosaics, was that false?


Now on to the piece itself:
Is that supposed to be Blurr or a 'repaint' named Sparkbeat? I get the feeling of a guy who thinks so fast his mind jumps to sentences fast in his own head. Almost feel like he's running scared, dodging bullets as other Autobots die. But then he sees a chick he knows so he turns all hero, maybe thats why he joined the Autobots ultimately? I know he was running at the end of his spotlight.

A fellow Pipes fan? Nice! I'm not gonna comment on the art because it's better than I can do (maybe). Reminds me of the old black n white turtles or the black an white uk stuff. A little Roche-like at times but not quite totally (the smoke and silloutees look nick-ish)

btw, it seems like everytime I look up TFs these days I see TJduckett , I'm assuming he's (you're) one of the new big timers? Congrats!! Did peugh and them retire for other endeavors?

Thank you for the kind words re: the artwork, what with the 2000 AD and the Roche-y comments. Much appreciated!

Ultra-Mason also pretty much nailed it, not only with the plot, but also in saying the choppy dialogue was supposed to reflect Blurr's jittery nature and thought process. And I am definitely a big Pipes fan. Looking forward to his i-gear figure and I was more than glad to see him survive (and possible thrive?) in MTMTE!

Gonna miss TF: Mosaic. It got me back into drawing, five years ago now, and through it I made some good friends. And I discovered it via Seibertron.com! So thanks for that as well, Seibertron!
Re: Transformers Mosaic: "Sparkbeat." (1405906)
Posted by Optimutt on July 30th, 2012 @ 7:27pm CDT

UltraMason wrote:I heard a week or so ago that they were doing away with mosaics, was that false?


Sadly, it is not false, nor a rumour. The Mosaic project is officially over, save for the final series of pieces that Richter is putting out for all of us to enjoy.

Oooh that takes me back! Wheres Whilce these days?

Now I am all over this style of artwork, very much reminiscent of the great Ted McKeever in my opinion! Even the twirls of smoke!!

Transformers fans may remember the promo artwork which appeared by McKeever when Hearts of Steel was being touted. Unfortunately Ted didnt bag the job but his promo pieces where awesome!