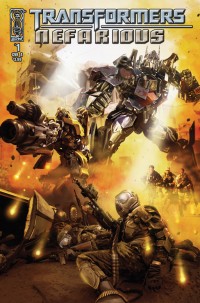 Transformers: Nefarious is the latest Bayverse comic series from IDW - it is to bridge Revenge of the Fallen to the events of the third movie. Issue #1 isn't even out yet and already, revered and respected Transformers comic writer, Simon Furman is giving us a little sneak peek at what's going to happen in Issue #2! You can check it out below or on Mr.Furman's blog here.


As promised (in the previous Updates post), here’s my long overdue Script (W)rap for Transformers: Nefarious #2, the official comic book sequel to Transformers: Revenge of the Fallen. This issue brings Optimus Prime fully into the fray, as The Initiative (the ultra-secret human organization at the heart of the mysterious Project: Nefarious… although when #1 comes out in March, it’ll be that much less mysterious) seek to distract, delay or stop entirely Soundwave’s investigations into the resurrection of Ravage. The all-seeing, all-knowing Decepticon is getting a mite too close to unwrapping the enigma that is The Initiative and, rather than engage directly (as they did in #1), they opt to pit faction against faction in the Utah Salt Flats. Soundwave’s strike team of Dirt Boss, Brakedown and Reverb mix it up with Ironhide, Sideswipe and the forces of NEST, but—as you’d expect—the sparks really fly when Soundwave and Optimus Prime go head-to-head! Meanwhile, National Security Adviser Theodore Galloway gets a whiff of Nefarious too. And, for him, that might just be terminal! Artist Carlos Magno is turning in the most lipsmacking art on this series, complemented by Kris Carter’s superlative colours. I’m so psyched about this series — I hope you guys will be too! More soon… and that’s a promise.

and P.C. with less gun powder taste in your mouth.

and P.C. with less gun powder taste in your mouth.

I prefer "movieverse" myself. More fun to say aloud.