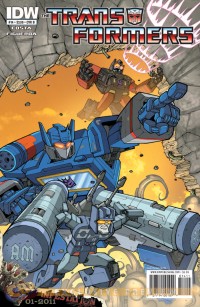 Two Autobots felled in the past two issues and the punishment is only beginning! A shocking revelation and an unexpected attack begins the “REVENGE OF THE DECEPTICONS,” the storyline that leaves a lot more Autobots on the operating table, and their entire future on Earth in question—and also features the return of superstar artist DON FIGUEROA! Chaoslock wrote:So he just went and ordered the gun on the net?

gotta love craigs list
Re: Transformers: Ongoing #14 Five-Page Preview (1154726)
Posted by bluecatcinema on December 7th, 2010 @ 7:27am CST
Is it just me, or does Rumble's head look a little out of proportion?
Re: Transformers: Ongoing #14 Five-Page Preview (1154728)
Posted by dragons on December 7th, 2010 @ 7:35am CST
go don its nice to get change once & while like to see more detail in there faces once in while intersted see how soundwave looks in this art
Re: Transformers: Ongoing #14 Five-Page Preview (1154736)
Posted by Optimutt on December 7th, 2010 @ 7:47am CST
Y'know, when I first heard that G1 was going on-going, I was thrilled. I was ecstatic and bouncing off the walls. Then came the first issue. Don's art was atrocious, the story was mediocre at best, and the characterizations were dull. Fast forward a dozen issues and Don's art is better, but the story is still rubbish. A human. Again. Blowing big holes in robots. Again. Forgive me, but Budianski did this so much better in the original take on this story, way back in issue 13. When Megatron's alt mode actually served its function. The only good thing that this book has to offer is that Prime B gets shot in the chest. Sadly, there'll be no drama and he won't die, but at least he gets the shot.

Chaoslock wrote:So he just went and ordered the gun on the net?

Also, Yay! for the return of the Movie-styled designs.[/sarcasm] Didn't IDW get the memo that the fans hated them?

Oh, yeah. They're pretty much ignoring the fans these days. The fact that they let Costa stay on as writer is all the proof we need of that.
Re: Transformers: Ongoing #14 Five-Page Preview (1154773)
Posted by Angelus on December 7th, 2010 @ 9:47am CST
I am really lost my interest in this G1 comic...
Preview pages of the Transformers... Yet it has no Transformers in it except for the final page (the covers not counted of course) and even that Transformer is shot by a human with a bang...

IDW has totally lost their way.
At first I just didn't like the updated characters but the stories were okay... But now... *sigh*
I have been re-reading the DW G1 comics and those people knew how to tell a story. What they told in 6 issues, IDW cannot tell in 14 issues.
The stories are just going nowhere fast, well, going nowhere slow because their story telling is so slow that by the time they reach some kind of conclusion, nobody remembers what the issue was anyway.
IDW should kill off this series...

Pick up where G1 season 2 left off en build from there. Enough stories to tell untill the movie and plenty of characters to build that were unknown by then but known since the movie.
Characters that everybody remembers and get Furman to tell the stories.

IDW: Get your act together or get out!
You can pull off G.I. Joe, why not Transformers???
Re: Transformers: Ongoing #14 Five-Page Preview (1154803)
Posted by Stormwolf on December 7th, 2010 @ 10:57am CST
I dropped the title a while back, these preview pages are a confirmation to me that the comic is still ass.

Even Brad Mick wrote better stories then this

Re: Transformers: Ongoing #14 Five-Page Preview (1154823)
Posted by Oilspill on December 7th, 2010 @ 11:42am CST
OK, enough is enough. I should have stopped buying ongoing a long time back, but that's it for me now. I don't hate humans in Transformers fiction, in fact I think they are quite necessary, but I've had enough of humans killing TFs easy as pie. I'm guessing Soundwave was manipulating the guy to assassinate BB, but that doesn't make it any better - like the previous 13 issues, it looks like it is still going to be a steaming pile of crap.

I will get any decent looking minis, like LSOTW, Ironhide & Drift, but no more ongoing for me. I'm out.
Re: Transformers: Ongoing #14 Five-Page Preview (1154831)
Posted by The Legend on December 7th, 2010 @ 12:17pm CST
Neither this or the 10 page preview over at TFW have made me reconsider giving this up. How much longer 'til IDW goes with a reboot with a decent writer? That's the only way they'll get any of my money again.
Re: Transformers: Ongoing #14 Five-Page Preview (1154841)
Posted by Windsweeper on December 7th, 2010 @ 1:16pm CST
What ever did happen to Brad Mick? I loved Dreamwave G1 stuff. For one thing, he knew the characters.

Actually, what happened to Simon Furman? While I wasn't happy with another G1 reboot, especially with so many major changes, his 'ation' series' were great. Wish he kept Thunderwing's Matrix affinity though, his Marvel run was the best version of Transformers. Oh if only we could get Furman and Mick. Furman's sense of the epic and Mick's characterisations.

Slag it, let Roche write the ongoing. He does Prowl brilliantly.

I have to agree with the earlier poster, the Marvel and Dreamwave stories never dragged or gave so much focus to humans, well furman didn't. I could have done without Budiansky's Mechanic, Circuit Breaker and Robotmaster.
Re: Transformers: Ongoing #14 Five-Page Preview (1154859)
Posted by Supreme Convoy on December 7th, 2010 @ 2:04pm CST

bluecatcinema wrote:Is it just me, or does Rumble's head look a little out of proportion?

So are his arms!

Seriously though. I'm really enjoying the series and I'm always puzzled by the reactions. I don't agree that the book is "slow" but I do understand that the story is being told in an arc like most modern comics so it can be sold in a paperback later thus the pacing is different as opposed to stand alone issues.

Instead of listing things you don't like about comic, what do you want to see in the ongoing?
Re: Transformers: Ongoing #14 Five-Page Preview (1154862)
Posted by geterman on December 7th, 2010 @ 2:17pm CST
I got my issue yesterday. I was a good read. The preview pages don't do it justice. The ending was real good I was surprised. Can wait for next month. Even though I hate the Bay-formers design. I actually like these. A hybrid of the two. At least I can tell them apart unlike in the bay movies.
Re: Transformers: Ongoing #14 Five-Page Preview (1154863)
Posted by Chaoslock on December 7th, 2010 @ 2:18pm CST

geterman wrote:I got my issue yesterday.

How, exactly? It's not supposed to be out until tomorrow, and I doubt any store would have gotten it already. (And even if they did, they sure as hell shouldn't have sold it before tomorrow.)

1). A decent storyline that doesn't come off as being written the night before.
2). A plot that's engaging and interesting.
3). Characterization that stays true to the characters, not characterization that suits the storyline.
4). Human characters that aren't ciphers and stock cliches.
5). No character deaths that aren't simply for shock value. If you're going to kill someone off, make him sympathetic and make us care.
Re: Transformers: Ongoing #14 Five-Page Preview (1154886)
Posted by Stormwolf on December 7th, 2010 @ 3:16pm CST

1. Characters that stay consistent, so no more dumbing down to fit the story
2. More post 1986 characters, most cartoon oriented writers are scared to do this
3. Massive Autobot and Decepticon armies, no more petty gangwars
4. Focus on the Transformers, not on the humans
5. More Wreckers style violence
6. Transformers staying true to their powers and abilities, a little bit of acid shouldn't damage a TF too much
7. Bring back more obscure characters, Xaaron and Flame would be good characters
8. Furman style Grimlock
9. Budiansky style Blaster
10. Smeltingpools, I shouldn't have to explain this one
11. Thunderwing restored to full sanity
12. Citybot battles, G1 has 6 citybots to use for this
13. More Japan exclusive characters, Star Saber, Deathsaurus, and Metalhawk would make awesome commanders
14. Quintesons as a credible threat, not villains of the week
15. Shockwave as a leader
16. Omega Supreme vs Liokaiser, this battle would be beyond awesome

Bee
Click here to view additional comments about this topic at the Energon Pub Forums ...