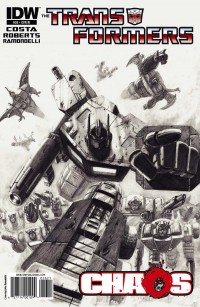 Courtesy of Comic Book Resources we have a seven page preview of IDW's Transformers Ongoing #26, due to hit shelves this Wednesday, September 21st.


“CHAOS” rages on! A hole is punched through to the core of Cybertron itself—but what for? Where’s Galvatron?! And why is Megatron, deep in the Autobot base and stuck in his cell, laughing? It all spells one thing—TROUBLE with a capital “Crush the Heroes!” CHAOS part 2, in which things go from bad, to holy-hell-how-are-we-gonna-get-out-of-this-alive!!!

tekering wrote:Okay, so I'm a few issues behind, but... Sunstreaker? Ironhide? Doesn't anyone stay dead in IDW's universe?

A few? sorry hoss, you are a whole year behind. and the dead thing, read a marvel comic from time to time. everyone dies once. EVERYONE
Re: Transformers Ongoing #26 Preview (1291506)
Posted by Skycharger on September 20th, 2011 @ 1:18pm CDT
THE ART IS BORING! Its so frustrating to go from something super detailed, to super expressive, and then end up with this guy? 1 issue of suck every now and then is a given...but if this keeps going past 3 im done with this subscription..
Re: Transformers Ongoing #26 Preview (1291524)
Posted by Tigertrack on September 20th, 2011 @ 2:15pm CDT

tekering wrote:Okay, so I'm a few issues behind, but... Sunstreaker? Ironhide? Doesn't anyone stay dead in IDW's universe?

A few? sorry hoss, you are a whole year behind. and the dead thing, read a marvel comic from time to time. everyone dies once. EVERYONE

DC also has many die and comeback: Superman, Batman, Green Lantern to name a couple of the heavies.

YoungPrime wrote:Alright .....where were all these guys before Chaos? I counted less than 20 Autobots boarding Omega back onEarth.... And I must say the art is beginning to wear out it's welcome. Making out who's who is becoming a task in itself!

I totally agree with you, as I said so much in the post right before yours!

I didn't even realise it was Rodimus who was volunteering to go up in Omega until his name was said, then I looked back and I still had trouble recognising him.

And Megatron at the end? ugh ... enough with the Gundam inspired designs please.

Or maybe it was just the terrible art, either way, not impressed.
Re: Transformers Ongoing #26 Preview (1293100)
Posted by frontline77 on September 24th, 2011 @ 10:24am CDT
Ok so i haven't read an issue since like #6. Can somebody tell me if this is like a flashback or is ironhide back? im soooo confused

frontline77 wrote:Ok so i haven't read an issue since like #6. Can somebody tell me if this is like a flashback or is ironhide back? im soooo confused

Michael Bay’s jealousy meter may have been tickled a bit with the release of this issue of Transformers Ongoing. Honestly, I’m not sure Michael Bay cares for any Transformers beyond the universe that he created, but if he did, CHAOS Part 2: NUMBERS would probably be amongst his all time favorites.

Continuing with the outer space adventurama, last issue in space (Issue 24) saw the Autobots staring down the gun barrel of Kimia; the weapons research facility transformed into one of the galaxy’s largest weapons of mass destruction, ready to lay waste to Optimus Prime’s little Autobot opposition force on Cybertron. Looked hopeless, right? Eh, not so much.

In issue #26, the Autobots find out they are not the target of the captured Kimia station, but the planet Cybertron itself is, at some precise coordinates whose significance we are not yet aware of. Optimus, noting new life for his team, immediately sends an aerial assault team to try to at least redirect Kimia, to possibly cripple it, but if need be to destroy it.

Silverbolt, Rodimus, and Omega Supreme lead a cast of 100’s (it seems) of aerial Autobots out of Cybertron’s atmosphere and into direct conflict with the station. They are met by hordes and hordes of mindless Sweeps. Back on Cybertron, Cliffjumper and Wheelie scout out the Cons. Through a lack of discipline and situational understanding, Wheelie pushes the Autobots back into conflict with Galvatron and his massive amounts of planetside Sweeps.

Meanwhile, after being stopped short of shooting a large hole through Cybertron, Kimia is removed from functional use thanks to the sacrifice of two very altruistic Autobots. Galvatron seems to think he has gotten what he needed from the shortened blast anyway, and quickly pulls out, removing himself and Jhiaxus to investigate the epicenter of the blast’s impact. Optimus, of course, must follow.

And for the issue’s coup de grace, Megatron escapes Omega Supreme (surprise) and seems to have added some sort of armor and weaponry on top of his existing hull and claims Cybertron for himself made from all of his little copies of himself. The Autobots immediately mess their collective aft hulls. End.

I know the issue has been out for about a week, but I did not want to give away all the details involved in it. It’s a fun, action-packed, moving at the speed of light story!

There isn’t a whole lot of controversy to this issue, it’s advancing the story nicely, building tension and creating what seems to be an almost hopeless situation for the Autobots (does anyone else hear “The Touch” in the background?). "This is my boom stick."

If I go for the easy shot at criticism, it’s at the art. It’s not bad, in fact, I like it, I am a fan of people taking license with character designs to fit his/her art style. Using current designs in a new style can be cool, and Livio does that creating an instantly recognizable painted, scratchy, almost dreamlike style for the space showdown, highly contrasting Brendan Cahill’s tighter, more classic-styled work for the other Ongoing story arc, The Last Story On Earth.

At times it can be hard to tell who characters are, or what they might be doing. And sometimes the art style does not seem to work with the newer Don Figueroa created designs. But I think for as many people that complain about these points, there are just as many supporters of it for it’s different feel, almost like Alex Ross is finding his way into the Transformers universe (Or Bill Sienkiewicz, again). However, it does seem to tilt between trying to look lifelike and real to being more of an impressionistic look at the bots. Purposeful, or not, I’m not sure. You'll find toy inspired al modes, and almost too simple and too flat faces at times.

Regardless, I believe the huge difference in art from what we are used to actually makes this part of the series seem more epic. I almost believe if it were a more classic-style artist, the impact that this story is meant to have would not be quite as noticeable. But Don’s classic style worked well enough for Stormbringers, so maybe this drastic of a difference was not needed, but is a nice change at times.

There are other things to pick at as well if you look. Like where the dead army went that Galvatron raised in the Heart of Darkness series? Everyone not named Galvatron, Cyclonus, and Scourge seems to be a sweep now, but clearly at the end of HOD there were all types on Cybertron with Galvatron. And with the change/disappearance of his troops, so the Autobot army seems to have grown larger and changed from what was originally intimated when this whole space action started back in 20, and 21.

Honestly, these small wonderings do not make me want to stop reading as some of the choices the creators made in the past had made me want to do. I want to see this through, I want to see what this DVoid thing is (Unicron is the easy guess, but doesn’t seem quite right) and how Galvatron’s wound to Cybertron will help him to stop it when his back from the dead army had a very hard time defeating DVoid’s harbinger back in HOD #4.

So what do you think? Does the CHAOS arc compare with previous galactic Transformers stories like ‘End of the Road’, ‘War Within’, or ‘Stormbringer’ or the G2 Marvel series? Do you think Mike Costa has finally gotten into his ‘writing zone’, with James Roberts helping to bring him there using his good karma that grew to fruition with ‘Last Stand of the Wreckers’?

If you haven’t read this issue, I suggest picking it up and seeing this through until the end...

Re: Transformers Ongoing #26 Preview (1294161)
Posted by RK_Striker_JK_5 on September 27th, 2011 @ 5:41pm CDT
Not a fan of the art, either. Ugh...
Re: Transformers Ongoing #26 Preview (1294210)
Posted by NemesisMonkeySupreme on September 27th, 2011 @ 9:14pm CDT
Livio really needs to stick to just covers. I think the lack of visual storytelling that his art just doesn't provide is making what could be a really good story just something we're all waiting to conclude so we can get to Roberts & Roche.

The comparison to Bill Sienkiewicz is spot on in my opinion. I loved Bill Sienkiewicz' covers on my books (Daredevil, Batman, etc.) back in the day, but I was never a fan of his panel work (Elektra: Assassin, Arkham Asylum, Stray Toasters, etc.) even when the stories were his as well (such as in Stray Toasters).

CHAOS Part 2: NUMBERS would probably be amongst [Michael Bay's] all time favorites.

All things aside, I don't think the book really needs that much of a damning qualifier…

Re: Transformers Ongoing #26 Preview (1294251)
Posted by SpaceSkull on September 28th, 2011 @ 6:33am CDT
Really dig the art. Nice to see something different.
Click here to view additional comments about this topic at the Energon Pub Forums ...