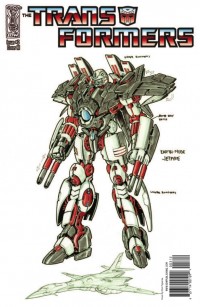 The month of January brings in a new chapter to the Transformers 'Ongoing' series. Exclusive to Newsarama, they offer up a 5-page preview of Issue #3. We get to see a relatively odd relationship between Hot Rod and Jetfire. This chapter also marks the arrival of a certain Commander. Check out the description, covers and a little preview below......

Transformers #3
Mike Costa (w) • Don Figueroa (a) • Figueroa, Andrew Wildman (c)
HOT ROD’s desire to get off-planet leads to some desperate measures, OPTIMUS PRIME and Spike sit down for an unpleasant conversation, and a new arrival to the AUTOBOT camp comes at their most vulnerable time possible. Costa and Figueroa continue to make history, bringing the AUTOBOTS to their (almost) darkest hour.
*2 regular covers will be shipped in a 1-to-1 ratio.
FC • 32 pages • $3.99

.....while the rest can be seen at your own discretion here.

Issue #3's publishing date is on January 13, so you should find it in your local comic store by the end of the week. Till then,

Stay tuned to Seibertron.com for the fastest Transformers news on the net!

And I know Jetfire is a gentle giant... but a dumb giant now?

and Wolverimus calling him J.F.?

Oh dear.. Ryan's gonna rip this apart.
Re: Transformers 'Ongoing' #3 Five-Page Preview (1035899)
Posted by lowman_x on January 11th, 2010 @ 3:56pm CST
It's not that Jetfire's "dumb" it's that his processors are having to slow down so much because of the 'archaic' communication systems we use. I can kind of relate because, as a teacher, I spend a lot of time with teenagers and, to be honest, I sometimes get home feeling like I'm getting more stupid because of the constant interaction. LOL

I'm liking how Ultra Magnus is being portrayed. The IDW Magnus is a cool take on him as a "cop" (oooh! A Cops style issue would be cool LOL) and not as a self-doubting, Prime neverbe.

The art is starting to have some modifications to it I can see. They've lost the "teeth" and the lines on the faces are becoming a little less distinct. I think we'll see some more mods as the issues progress. All in all, I'm really digging the ongoing and I can't wait to get my hands on the new issue.

Re: Transformers 'Ongoing' #3 Five-Page Preview (1035901)
Posted by Ultra Magnus on January 11th, 2010 @ 3:59pm CST
I do like this very interesting take on Jetfire's design; Don has a long standing tradition of interesting Jetfire designs. This one's quite unique. Lean, too!

Yes, the detractors will get their quips in soon enough, so let the floodgates open and let the Hater-ade flow! Oh boy this one should be interesting. Still, I got your back, Don.

mysteriousdewd wrote:Is the publishing date correct? Because in the newsletter and my local comic shop list it as coming in this wednesday the 13th. (Though I do live in Canada I doubt they would send it to us first)

the new look they've gone with.

I don't know who convinced Don that drawing G1 like some sort of CraptasticMovieverse rip offs was a good idea, but HEYsus-Christ I actually am rooting for this to fail.

I mean seriously, how can you give us 4 years of drawing the SAME charicters in the SAME universe one way, then switch to this

ITS THE SAME UNIVERSE the characters have the same backstory. Now all of a sudden we are supposed to accept them drawn in some stupid puzzleformer look?

I thought it might grow on me, but it hasn't. Every-time I see a new character I think its worse then the last one. the faces are just random crap.

I'm sorry, but our I expected a LOAD more for our first "on-going" series in like 10 years, and all I can think of is "God I have to sit through the pain of 80 more issues of this craptasticness ..."

If it wasn't for Last Stand of the Wreckers, I would boycott IDW for pulling this. Whatever is in the water of the people making the decisions over there, is making them Batshit-crazy!


bring back spotlight...
Re: Transformers 'Ongoing' #3 Five-Page Preview (1035978)
Posted by Chaoslock on January 11th, 2010 @ 7:29pm CST
I've cancelled my preorders on Ongoing when I first saw the 5-page preview and Ironhides death from issue 1. Along with it I cancelled the All Hail Bumblebee preorder too (I've had a bad feeling about it), the only one I kept was the Wreckers. If and When the series' level will rise to the earlier levels (art- or storywise*), I'll get the TPBs, but until then I won't pay for this.

I much prefer nametags to clumsy name dropping. Despite the Dynobots appearing consistently in IDW, Furman roll-called them in every issue of Maximum Dinobots, as if it were a toy advert.

Have to remember that it's a very large cast, and someone who isn't already into the franchise will find it difficult at first. I personally would have kept to a smaller roster, however.

I'm quite amazed at the negativity in places. These two issues have been far superior to Infiltration's initial two, in my opinion. *shrug*
Re: Transformers 'Ongoing' #3 Five-Page Preview (1035992)
Posted by Tigertrack on January 11th, 2010 @ 7:49pm CST
Jetfire reminds me of the pre-Earth seekers from the movie-verse. Okay, maybe only sort of.

I think one can find these superior to Infiltration's beginning, because Infiltration and the other -tions already set the table. We did not have to get re-introduced to the story, etc., although random Autobots do seem to be just popping up.
Re: Transformers 'Ongoing' #3 Five-Page Preview (1036001)
Posted by Samsonator on January 11th, 2010 @ 7:58pm CST
Say what you will about his face, and I'll agree, but still that Magnus looks hardcore. He's a bit closer to Don's more old-school stuff than what he's dishing out right now (like that Jetfire for instance)... All in all the design style still strikes me as a bit off, especially in the aforementioned faces... but I suppose I'm still interested in where the story goes from here...

- Sam
Re: Transformers 'Ongoing' #3 Five-Page Preview (1036003)
Posted by First Gen on January 11th, 2010 @ 8:12pm CST
Can someone tell me why every new series Don does has to have a radically different Jetfire? I mean, even compared to this "new art style" he does not resemble any form of any prior Jetfire in the least.

Then its like a slap in the face when you read Bumblebee (which is directly related to Ongoing BTW) and you get super old school G1 art, when they are supposed to be the same exact bots in the same exact storyline.

I'm gonna give the story a chance and keep reading, but this art is bad
(don't get me started on the humans too) and the nametags have got to go already.
Click here to view additional comments about this topic at the Energon Pub Forums ...