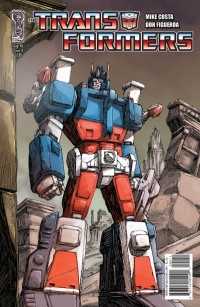 The last Wednesday of March calls for the fifth issue of IDW's 'Ongoing' Transformers. We've got a preview thanks to the folks over at BZZURKK, and it involves talks between Witwicky and Optimus Prime. Check out the covers, spoilers, information and a snippet of the preview below...

OPTIMUS PRIME and Spike Witwicky have a chat that could define the future of AUTOBOT and human relations! But lest you think it’s all talky-talk, back at RODIMUS’ camp something big happens, something very big. A game-changing event in IDW’s TRANSFORMERS, with a Don Figueroa double-page spread that has to be seen to be believed!
Transformers
32pg.
Color
$3.99 US
On Sale March 31, 2010 ..while the rest can be seen over at BZZURKK here.

It looks like Bumblebee is not going to be a VW Beetle anymore. I think the movies have given him a new, updated image and that is what will be portrayed from here on out.

I'm thinking that the new fans, brought into Transfandom due to the movies, don't know him as a Beetle anyhow. They gave us long time fans a nod in the first movie. That's probably going to be the end of it.
Re: Transformers: Ongoing #5 - Four-Page Preview (1059334)
Posted by Chaoslock on March 29th, 2010 @ 2:49pm CDT
Four pages of talking about weather.... wow