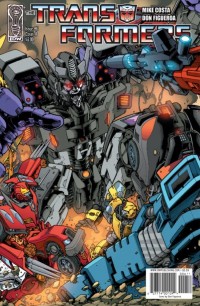 Thanks to the folks at Comixology, we've got a five-page preview of Transformers 'Ongoing' #6. The fifth issue left the Autobots in trouble with the newly formed Menasor! Check out the covers, information, and the snippet of the preview below!

It's the AUTOBOTS versus the biggest foe they've faced since DEVASTATOR! But with OPTIMUS PRIME in captivity, do our heroes stand a chance? The action keeps coming courtesy of Mike Costa and Don Figueroa! You can find the rest of the preview here.

Posted 2 days ago
News Categories: Toy News, Movie Related News, Cartoon News, Comic Book News, Site News, Rumors, Event News, Digital Media News, Collectables, Sponsor News, Game News, Site Articles, Store News, Company News, People News, Press Releases, Reviews, Sightings, Unlicensed Products News, Auctions, Transtopia, Interviews, Knock Offs, Collector's Club News, Editorials, Heavy Metal War, Podcast, Contests, Book News, Top Lists
Click here to post your comment about this news story!
Re: Transformers 'Ongoing' #6 Five-Page Preview (1068373)
Posted by First-Aid on April 26th, 2010 @ 9:05pm CDT
I'm guessing Spike decides Prime isn't a threat and lets him go to finish this fight. Or else Rodimus gets ahold of Omega Supreme to help. An Omega vs Menasor fight would be nothing but win. And short.
Re: Transformers 'Ongoing' #6 Five-Page Preview (1068412)
Posted by Angelus on April 27th, 2010 @ 2:02am CDT
I do read the comic...
But I just can't get used to the art. I think The Wreckers look a just like a Transformers G1 (of sorts) comic should look like.
Leave the bots and their armor-parts for movieversie and let the other series be as those were made in the first place!

I couldn't get used to the new style and design in the -ation series and this is even worse! I know they are doing there best and they are doing it way better than I ever can... but still, we do have to buy those books!
Better shape up!