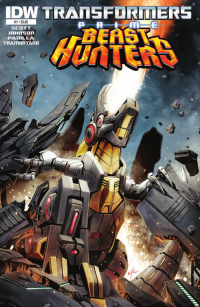 Also from our friends at IDW Publishing we have the preview for the first issue of Transformers Prime: Beast Hunters. Downloads and retail copies available tomorrow, enjoy the preview found below.

BEAST HUNTERS! They were there when CYBERTRON fell -- but what happened to the DINOBOTS for the past few thousand years? Here's a hint -- GRIMLOCK and company haven't been sitting around and relaxing! The time is now -- the place is CYBERTRON -- and the recipe is ACTION!

Sabrblade wrote:Is that a Space Slug that Sludge is dragging near the beginning? Sludge encounters Firestar who is being attacked by Insecticons. After the attack, Firestar reveals to Grimlock that the Last Spark city is under attack by the Insecticons and needs help. Grimlock remembers the previous encounter with Airwave and refuses to help. Sludge feels that it’s wrong to leave the city in dire need and decides to help along with the Snarl’s aid, they search for the Insecticons lair.

The Rage of the Dinobots creative team of writers Mairghread Scott and Mike Johnson with art by Agustin Padilla return for this mini-series. It’s a strong first issue. I enjoy the fact that this issue isn’t Grimlock centric and gives a spotlight on Sludge and Snarl. Though I’m sure Grimlock will play a major role towards the end of this story. I had to look up Airwave who was a Decepticon Micromaster. I thought it was an interesting choice to have lead this group of survivors.

Agustin Padilla’s style doesn’t quite fit in the Prime universe look but he draws great robots and dinosaurs. I like the way he draws these characters and hope he does more Transformers after the mini-series is over.

Overall, I enjoyed this issue. I’m a big fan of “last stand” stories so I can’t wait to see how the Dinobots get out of this situation.

PAGE 1: After the events from Rage of the Dinobots, was it easy to start an all new ongoing like this and run with it?

MAIRGHREAD SCOTT: Mike and I had always hoped for an ongoing to come out of Rage; the world is so rich it seemed a shame not to explore it. Of course, there is a significant time jump from the mini-series to Beast Hunters so that we can (eventually) bring in the cast of the TV show. That made picking out exactly when and where to start a bit of a challenge, but this has been a really fun story to write over all.

PAGE 2: How scarred are the Dinobots from their experience in ROTD? Has the current situation on Cybertron forced them to change much and adapt?

MAIRGHREAD SCOTT: I wouldn’t say the Dinobots are so much “scared” from their time in ROTD as liberated by it. They have a chance to build a life on their terms at the end of Rage. Issue 1 is about what their new roles are in society and how they’re coping. Of course, there are always challenges to face, but I think the Dinobots are definitely moving forward rather than falling back.

PAGE 3: Considering his position now, is Grimlock the one facing the greatest of challenges from everyone else on the planet? Even though most are struggling to survive more than he is?

MAIRGHREAD SCOTT: Grimlock is dealing with the hardest part of being a leader: that not everything is in your control. Since he’s a ’Bot striving for control as much a possible in his personal life (Remember his problems with his Dino-mode in Rage?), any problem he can’t immediately solve is really difficult for him to cope with. And since he runs the last real city on Cybertron, there’s a lot he’s not going to be able to solve.

PAGE 4: Are you finding the challenge of writing an ongoing series as opposed to a mini-series more vigorous or demanding than what you may have initially believed?

MAIRGHREAD SCOTT: On the contrary, I am first and foremost a long-format writer. I’m always looking to explore every nook and cranny of continuity. Although I love the cleanliness of a single arc mini-series, it’s the month-by-month floppies that let me really dig in to all of Cybertron’s forgotten corners.

Poyguimogul wrote:Despite nice colors. The art is kind of ICKY imo... The Grimlock drawings look good, because they have toy for reference, but the others.... ICKY!...imo..

and the writing is the most interesting ive seen the dinos in ages.

i cant see myself buying this but im intrigued enough to buy the trade when it comes out.