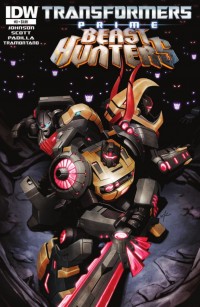 Thanks to our friends over at IDW, we have a full preview of tomorrow's third issue of Transformers: Prime - Beast Hunters. Check it out below, and drop by later for a review!

Transformers Prime: Beast Hunters #3
Mairghread Scott & Mike Johnson (w) • Agustin Padilla (a) • Ken Christiansen (c)
THE BEAST WITHIN! After the Fall of CYBERTRON, GRIMLOCK and his DINOBOT allies are tasked with protecting the last remaining Cybertronians from the dangers of the demolished planet. But as time passes, GRIMLOCK grows more and more uneasy with the rage and power that he’s forced to hold back. Can the AUTOBOT leader learn to control his power or will the beast take over?
FC • 32 pages • $3.99 THE BEAST WITHIN! After the Fall of CYBERTRON, GRIMLOCK and his DINOBOT allies are tasked with protecting the last remaining Cybertronians from the dangers of the demolished planet. But as time passes, GRIMLOCK grows more and more uneasy with the rage and power that he’s forced to hold back. Can the AUTOBOT leader learn to control his power or will the beast take over? Last issue concluded the two-part story arc with cyber-vampires and robo-betrayals, written by Mairghread Scott. With this issue, writing duties pass on to Mike Johnson (though both plot the series and stories together), for another two-part arc, as stated at BotCon - with a bit of a tie-in in around issue 6. Yep, that's the one

First impression on the writing, though, is not as happy as the previous two issues. The dialogue appears to be flat, somehow, and there's a lot of it when Swoop's involved, it seems. The exchanges between other characters further on in the story seem flatter, too, which really clashes with the story they're trying to tell. The story is decent, dealing with the aftermath of previous issues, the previous Rage of the Dinobots series, references to the animated Prime series, and seeding for more to come, either next issue or further down the line. It will be interesting to see how the plot will fit in just two issues, as there are some pretty big (ha!) developments in this one, though not entirely surprising. Oooh, what could it be?

Overall, not a bad plot, but the dialogue really detracts from its full enjoyment, in my opinion. It may be the case that reading it again once the next issue is out may enhance it again, but so far, a little disappointed.

Agustin Padilla is still on artwork, and I have to say, there are some moments where it feels a little rushed, which is a shame - when Padilla is good, he is really good. And you can see that when the big (ha!) revelations take place in the issue. Really good. But I won't show you

The credit, though, also goes to colourist Priscilla Tramontano. Most of the story takes place underground, and playing with lights and darkness does not look easy, especially not with some of the wider shots. And, as usual, Tom B. Long on letters delivers, conveying the bestiality (cf. Monstrosity) of some of the characters when needed, and playing beautifully with soundwords. A bit of a drop in consistency at times, but the artwork is good, with some real gems here and there. The darker tone of the first two issues has yet to be fully re-established, but the whole artistic team do a sterling job of getting it across with shots and shades.

The dialogue seems to have dimmed a little, and the artwork feels strangely rushed in places, though the organic creatures in the story are beautifully crafted and coloured. I wasn't as blown away until I reached that section of the story, in all honesty, so give it a shot!

I'm a little disappointed after being pleasantly surprised with the first two issues, though the story does seem to be working towards something really big (ha!). And the panel on the first page - hinting at something else to come, or past events we've seen? Next month might tell!

Re: Transformers: Prime Beast Hunters #3 Preview (1505730)
Posted by MagnetarPrime on July 23rd, 2013 @ 11:24am CDT
somebody PLEASE tell me we will get all Dinobots for FOC
FOC Grimlok figure is awesome, I really hope we get all of the Dinobots this time