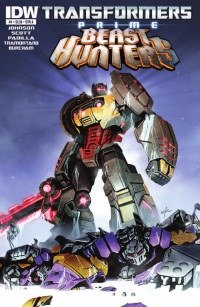 Rounding out our trio of comic previews for next week we have Transformers Prime Beast Hunters #4. Grab a copy next Wednesday, but for now check out the preview found below.

Transformers Prime: Beast Hunters #4
Mairghread Scott & Mike Johnson (w) • Agustin Padilla (a) • Ken Christiansen (c)
PRIMEVAL PREDATORS! The DINOBOTS have stumbled upon some of SHOCKWAVE’S old experiments… now they are running rampant across the Cybertronian underground. It’s up to GRIMLOCK and SWOOP to subdue the enemy! But with pressure mounting and his foes wreaking havoc, can GRIMLOCK keep his own rage in check?
FC • 32 pages • $3.99 Dinosaur fron earth vs metal dinosaur from Cybertron. One of these creatures doesn't have a chance. Looks to be another build up issue. After issue 5 they better make some major story plot moves.
Re: Transformers Prime Beast Hunters #4 Preview (1514267)
Posted by Va'al on August 27th, 2013 @ 11:59am CDT
Dino-Fight!
(Spoiler free-ish)

PRIMEVAL PREDATORS! The DINOBOTS have stumbled upon some of SHOCKWAVE’S old experiments… now they are running rampant across the Cybertronian underground. It’s up to GRIMLOCK and SWOOP to subdue the enemy! But with pressure mounting and his foes wreaking havoc, can GRIMLOCK keep his own rage in check? Story
Final review of the day/week, it's been a busy one this time round! We end on a smashing, thumping, powing, crunching, punching note, with the conclusion to the second Beast Hunters story arc, written once again by Mike Johnson (on ideas by both Johnson and Mairghread Scott). Ready? Fight! We left Swoop and Grimlock last month to deal with a bunch of organic, very much alive-looking Earth-like dinosaurs, and the fight spills over into this issue. For the entire issue. Seriously. All of it. One giant, metal-meets-meat dino fight. Oh, and this guy. Briefly.

There is some sort of plot, mostly resolved in the final pages, but it really does just revolve around the menacing encounter between the Dinobots and their organic copies. There is, however, Swoop's voice running through the issue, but I haven't seen it lead anywhere particularly relevant. Except for MAJOR PLOT POINTS

I'm still not convinced about Johnson's style, and I'll be waiting for his next arc before passing any type of judgement. These two issues have been a little disappointing compared to the opening two, but this one has very slightly brought it up a smidge, removing some of the poor Swoop dialogue. Colour duties are not only with Priscilla Tramontano, but also with some assistance by Josh Burcham and Thomas Deer! While there may not seem to be that much going on in terms of chromatic contrasts, the lighting and shading, especially on the beasts, is stunning. As usual, Tom B. Long's lettering is brilliantly creative, and Johnson does get points for introducing more dino-noises that I thought were possible, for Long to play with. Extra mention also goes to Ken Christiansen, and his amazing cover art of Grimlock and the Insecticons.

Abandoned plot for action, sideline characters completely kept to the side, inner monologue captions and I'm not sure where this is going. But the artwork is well worth the comic, really. It's up to you if you'd like to have some good-looking but senseless bashing between beasts. Will we ever get there?

I am definitely looking forward to the next issue, but mostly because these last two have disappointed in the wake of Scott's arc, and she's back on actual writing duties next month. Shame, really, as this issue isn't bad, it's just not that good, except for the artwork - especially next to the other two titles coming out this week.