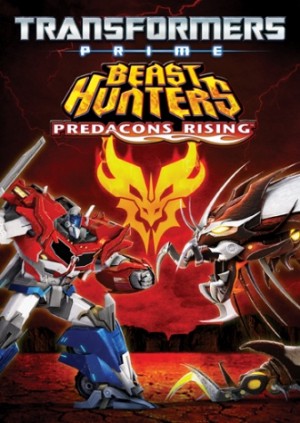 Get ready to roll out with the highly popular feature-length epilogue to Hasbro Studio’s Emmy® Award-winning series TRANSFORMERS PRIME on a variety of digital entertainment platforms in North America. On Tuesday, March 25, 2014, Shout! Factory, in collaboration with Hasbro Studios invite loyal fans, families and kids to further venture into the awe-inspiring world of TRANSFORMERS PRIME when TRANSFORMERS PRIME BEAST HUNTERS – PREDACONS RISING, a special original feature presentation, will be available on Digital HD for rental and purchase on iTunes, VUDU, CinemaNow, Google Play, Rovi, Sony PlayStation Network and Xbox, as well as available through Amazon Instant Video on April 1.

Brimming with spectacular CG animation, a captivating storyline and unforgettable characters from the TRANSFORMERS PRIME lore, TRANSFORMERS PRIME BEAST HUNTERS – PREDACONS RISING delivers entertaining cinematic adventure the whole family will enjoy. A resurrected UNICRON has taken over the now-lifeless body of MEGATRON to seek vengeance on the AUTOBOTS and ultimately, the destruction of Cybertron. This formidable enemy forces an unlikely alliance between the AUTOBOTS, DECEPTICONS, PREDAKING and two new PREDACONS, who come together in an epic battle to help protect their newly restored planet.

About Hasbro Studios
Hasbro Studios is the Los Angeles-based entertainment division of Hasbro, Inc. (NASDAQ: HAS). The studio is responsible for entertainment brand-driven storytelling for the company across television, film, commercial productions and short-form. It develops, produces and distributes TV shows based on Hasbro's world class brands, including TRANSFORMERS, MY LITTLE PONY, LITTLEST PET SHOP and FAMILY GAME NIGHT. Many of these shows air on the Hub Network, a U.S. television network for kids and their families, that is a joint venture between Hasbro and Discovery Communications (NASDAQ: DISCA, DISCB, DISCK). Hasbro Studios shows can also be seen on networks in more than 180 territories globally. Since its formation in 2009, the studio has received seven Daytime Emmy wins and 16 nominations. On the film side, the studio is developing and producing a number of features based on Hasbro's brands, including TRANSFORMERS: AGE OF EXTINCTION (Paramount), G.I. JOE 3 (Paramount) and CANDY LAND (Sony). The studio team also oversees the production of commercials that feature Hasbro's brands as well production of short-form content that can be seen on all of the major digital and social media platforms globally.

It's been on Canadian Netflix since the DVD came out.
Re: TRANSFORMERS PRIME BEAST HUNTERS – PREDACONS RISING ARRIVES ON DIGITAL ENTERTAINMENT PLATFORMS TODAY (1560174)
Posted by rpetras on March 25th, 2014 @ 3:54pm CDT

It has been on Netfilx for a while, that's where I watched it.

It's been on Canadian Netflix since the DVD came out.

It has been on Netfilx for a while, that's where I watched it.

Just checked, it is still there.

Oh, excellent! To be honest I hadn't even looked to see if it was there before I posted. lol...