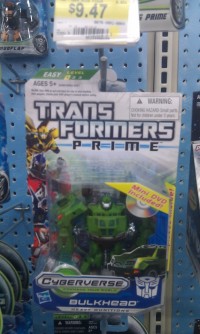 The Transformers Prime Cyberverse Commanders have started to show up at retail and as a nice little bonus they come packed with a Mini DVD that contains one full episode of Transformers Prime. These were found by yours truly at a central Oklahoma Wal-Mart. According to Seibertron.com member Flux Convoy the DVD features the episode "Masters and Students".

Re: Transformers Prime Cyberverse Commanders with DVD Spotted at Retail (1353147)
Posted by Noideaforaname on February 28th, 2012 @ 6:40pm CST
Forgive my ignorance, but what's a mini-DVD; they work just like full-sized DVDs? ...I know the Wii can easily take the tiny Gamecube discs, but that's doesn't necessarily mean DVD players work the same way.

Regardless, not really interested. I'd much rather get the season sets and not just a single episode, much less the same episode multiple times.

Well, at least they aren't BluRays
Re: Transformers Prime Cyberverse Commanders with DVD Spotted at Retail (1353185)
Posted by rpetras on February 28th, 2012 @ 8:03pm CST
To this I say, meh.

That gives me even MORE reason to save my moolah!

Now, do I save to buy two of these (Bulkhead and Megatron) or buy G.I. Joe:RAH Season 1 on eBay?
Re: Transformers Prime Cyberverse Commanders with DVD Spotted at Retail (1354484)
Posted by funklizard on March 3rd, 2012 @ 12:10am CST
I happened upon these and picked up all four.

Starscream is easily the weakest of the lot. His robot mode has jet kibble on its arms; and the jet has obvious leg kibble on its tail section. Still, it's not a bad rendition of Starscream for this size class.

Conversely, Bulkhead is easily the best of the four, with well executed robot and alternate modes. I'm annoyed that we seem to be getting Breakdown in Legion class, rather than another Commander to square off properly against this guy. Weak, Hasbro. (And, yet, not as weak as recycling DOTM Soundwave for this line. Sigh.)

I think Megatron is my second favorite. The robot mode is simply outstanding. Jet/spaceship mode is pretty good, but short of "great".

Optimus Prime is a solid entry with a nice alternate mode and a very good robot mode. Aside from the red plastic painted blue on the legs, it's difficult to find specific faults with this figure; but it nonetheless is missing some of the "wow" factor I got from Bulkhead and Megatron. It is most definitely a superior figure to any of the DOTM Cyberverse Optimus variants.

Across the board, these figures just seem to have a "classier" feel to them than the DOTM Cyberverse Commanders. I'm not sure if that's an effect of the aesthetic or just overall better design.

Megatron Wolf wrote:holy crap $10 for a commander, is that normal price or is the price higher cause the DVD isnt free like they normally are? either way thats way to much for it, hasbros out of their goddamn minds with this prices.

At least where I found these, Walmart has hiked the prices on all Cyberverse Commanders, including leftover DOTM stock. I'm not sure how much of this is permanent and how much will turn out to be "eager buyer" tax that disappears once the Prime Cyberverse Commanders start flooding store shelves (assuming that happens). I can't imagine why anyone would pay this price for a DOTM Cyberverse Commander (unless you found Guzzle and don't have him yet; or you're really stoked about finding Dark Sentinel Prime).

I agree that it's excessive. But so is $5 for a Legion figure; and these guys are twice that size (at least). I'm holding on to my receipt in case I find these at a lower price later.

On another notw not everyone is going to be able to play the mini dvds since not all players support them either because they're slot loading or just dont recognize them. Would've been smarter to use nornal dvds and pack them with deluxes or voyagers, but im guessing this is just a tactic to try and sell more commanders.

Yeah, the mini-DVD is useless to me. My DVD player is a (slot loading) PS3. I've lost track of how common tray-loading DVD/Blu-ray players are; maybe there are still a fair number out there. Of course, since I'll be getting Transformers: Prime on Blu-ray soon, I really don't care anyway.
Re: Transformers Prime Cyberverse Commanders with DVD Spotted at Retail (1354490)
Posted by funklizard on March 3rd, 2012 @ 12:46am CST

Noideaforaname wrote:Forgive my ignorance, but what's a mini-DVD; they work just like full-sized DVDs?

It's literally a DVD with a 80 mm diameter instead of the normal 120 mm. Most tray-loading players have an inset area that accommodates them.

DVDs (like CDs) are read from the center spiraling outward (opposite to vinyl records); so the disc can really be any diameter as far as the reading mechanism is concerned. It's just the loading mechanism that can have trouble with smaller discs (because there's less to grab/eject).