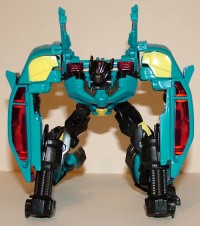 Once again Seibertron.com member Azrail has provided us with a pictorial review of an upcoming Transformers Prime figure, this time around it's Deluxe Rumble. Check out his review below:


Hi again. Thanks to everyone who liked my Kup review!

Here is a quick look at Transformers Prime: Decepticon Rumble. That's his full boxed title.
As always thanks to Kapow Toys - http://www.kapowtoys.co.uk in the UK! They are getting these guys from Asia at lightning speeds. Rumble is sold out now but there is a UK case due. http://tinyurl.com/d56xjrj

A lot of my pictures make his blue shade appear a lot lighter than it is. I will put a more natural picture up at the end to compare it. He is a nice blue kinda between that and cyan. Not as light as Hot Spot as it can seem in the pics.

He transforms into a small car. What type I don't know. Bots are my thing not cars.

It has a nice shade of red windows and black grill. There is a Decepticon logo on his grill but it's hard to see as it's dark.

His Piledrivers can be mounted on the sides. The whole car is quite small like most TFP but very plain. I would have preferred a more sporty or better model. This reminds me of the family car you might find Carly driving Daniel down to the local mall in!

If Bumblebee and others can be flashy why is Rumble so boring?

As you can see the rear is empty of paint except for one tiny Con symbol. Rather like Knock Out this guy screams out "Reprolabel me!"

Seriously Hasbro does paint cost that much these days! It's like all the budget went on the robot and they just said "paint it blue".

The robot mode is really very nice. I never had the United version and this is a great way to bring a new style to the figure I think.
He can hold his weapons in his hands as gatling type guns or flush to his wrist as Piledrivers. If you look underneath they are labelled L1 and R2.

Of course he has the giant chest face going on which a few figures have been showing but maybe not as blatantly. It has 2 red shoulder areas that run the light into the chest eyes.
The shoulder pieces can lock into place but can slightly scratch and scuff the sides. So treat it a little carefully.

The back is nicely detailed with the now almost standard hollow leg area.

A really cool feature is built in laser cannons on his back! In my view a real homage to the G1 guns he carried. They could have easily left him with large "wing" things so this was a nice touch. They could use a silver sharpie, which I plan on doing.

By clipping his arms back in you can create this kind of transformed piledriver mode look.

He has a lot of articulation and can make some nice poses. I'm not great at that so I will leave it to the video guys.
Ball joints on the shoulders, swivel biceps, jointed elbows, ball joint hips, ankles and jointed knees.

Tried to show the head well. Red eyes and crest which light up very nicely giving him an evil stare! It's on a ball joint with an extended red neck. Can get a lot of movement from it.

Basically I feel this is another great Decepticon! They seem to be the cooler of the figures so far. He's got a lot of character and I hope he appears in the show.
The only downsides are the car mode being so plain and that it doesn't scale too well with the other cars. Almost more First Edition size than RID scale. Compared to Kup's gaping holes though this is nothing.
I would recommend getting this guy when he comes out to add to the army!

Comparison pics coming up below shortly

He is a lot taller than the other RID cars. Really the sort of thing Kup should have been.
Maybe he's a people carrier car. Lol.

Rumble is a little longer than Knock Out.

A poor picture trying to show how the blue compares with the much lighter new Hot Spot. It's not too light but a darker shade between this and Hot Shot would have been good.

As already shown there is a variant head on the instructions. Getting a Frenzy would be cool but who knows. It could never happen or end up being an Autobot repaint!

He's possibly the shortest figure so far but that's not a bad thing. It's almost like they had to make his kibble large to meet the height of the others.

He is also quite bulky. A lot going on for such a small figure.

A quick glimpse at Dreadwing which I hope to review soon

Rumble and Kup fight it out!

I hope this helps some of you to make up your minds on this figure.

Post any questions and when I can I will try and answer them. Thanks for reading

The figure looks great and it would be fantastic if they made a red counterpart to go with him later on.

Unfortunately, I seriously doubt that many of us will be able to find this at retail.

Re: Transformers Prime Deluxe Rumble Pictorial Review (1415706)
Posted by Nemesis Destron on September 1st, 2012 @ 10:19am CDT
Nice indeed, can't wait to pick this one up. I think Reprolabels is gonna have to step in and help out in some detailing especially in the rear.

I decided since this doesn't represent Rumble IMO, I'm gonna dub him Hyperdrive. With the acception of window color his overall body color is pretty close to the

Micromaster...well then there it is!

Re: Transformers Prime Deluxe Rumble Pictorial Review (1415707)
Posted by a Cobra Viper on September 1st, 2012 @ 10:30am CDT
Blech! Not my cup of tea. Out of scale, huge kibble, and an odd color choice. I don't feel that this is a very good update of the original character.

That Dreadwing looks pretty nice. I might have to grab that if my local stores ever put out new product.
Re: Transformers Prime Deluxe Rumble Pictorial Review (1415722)
Posted by Gearslide on September 1st, 2012 @ 11:33am CDT

a Cobra Viper wrote:I don't feel that this is a very good update of the original character.

That's because it isn't an update of the original character. This is Prime Rumble, not G1. Different universe. That's like saying Robots in Disguise Megatron is an update to G1 Megatron. It's a new character that shares a name and features a few homages. That's it.
Re: Transformers Prime Deluxe Rumble Pictorial Review (1415726)
Posted by dedcat on September 1st, 2012 @ 11:50am CDT
I want to love you, Rumble... but I don't. The figure just looks kind of phoned in to me and gives off the same cheapness vibes as a happy meal toy, especially in vehicle mode.
I guess I just need some more time to warm up to it.
Re: Transformers Prime Deluxe Rumble Pictorial Review (1415735)
Posted by Flashwave on September 1st, 2012 @ 12:33pm CDT
I do love the looks of the figure, but I too am not sold on this as a Rumble, and I really do have a hard time seeing the pile drivers. The Alternator Frenzy I think did a much better job of it. And I don't see a dynamic with him and Soundwave, A predator Drone doing observation work over a major city?
Re: Transformers Prime Deluxe Rumble Pictorial Review (1415760)
Posted by kirbenvost on September 1st, 2012 @ 1:21pm CDT
Great review, and I'm sold.

He looks like a cool little figure, despite the lack of paint apps in vehicle mode.

Seriously, Hasbro. Just tack on another dollar if paint seems to be so expensive these days.

I hate that I have to buy Reprolabels for half of my new figures nowadays. I also used to try really hard not to permanently modify my figures but now I may just have to break out the paint markers, because Reprolabels can't deal with really complex sculpted areas, like those back laser cannons.

But anyway, Rumble looks great. I was originally going to hold out in hopes of a red one, but he's too cool to pass up.

Now if only they would get that United Scout mold released... it would've been a perfect fit for the 'Asian Exclusive' line.

Once again I forgot to mention that he has a revealer gimmick. Basically you pull his chest forward during transformation and his head pops out. Similar to the way Soundwaves does.

I'm trying to work out what colour to make his rims. Red or gold are on the cards.

Check out the gallery on TFW also. There are various ways to store his weapons I hadn't considered.

So I did the backpack lasers silver with my paint pen. So much clearer now!
Also put gold spots on the legs and knee joints.

Added the Con logos but I want to change those yellow shoulders. I will label over them. Any ideas on colours? Maybe red or purple or even gold?

I'm going to do more tweaks to him just trying to decide what colour to do his rims.

So I did the backpack lasers silver with my paint pen. So much clearer now!
Also put gold spots on the legs and knee joints.

Added the Con logos but I want to change those yellow shoulders. I will label over them. Any ideas on colours? Maybe red or purple or even gold?

I'm going to do more tweaks to him just trying to decide what colour to do his rims.

Thanks a lot. I hope to add more details to him soon.
Click here to view additional comments about this topic at the Energon Pub Forums ...