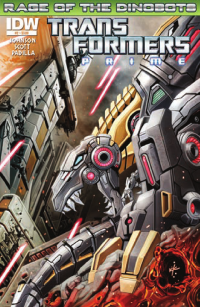 Our friends a IDW Publishing have sent over the previews for tomorrow's comic release Transformers Prime: Rage of the Dinobots #2. Check out the preview below, and be sure to pick up or download the full comic tomorrow.

(We are aware that the text in virtually impossible to read, but this is how the preview was sent out)

Update: A clear copy can be found by clicking here.

Transformers: Prime—Rage of the Dinobots #2 (of 4)
Mike Johnson & Mairghread Scott (w) • Agustin Padilla (a) • Ken Christiansen (c)
CYBERTRON FALLING! As their world collapses around them, the DINOBOTS battle SHOCKWAVE’s forces to protect the fleeing Cybertronians! SWOOP’s life hangs in the balance—his teammates fight to save him, but will he succumb to evil? The answer may not be what you expect!
FC • 32 pages • $3.99

Bullet points:
• Bringing the fan-favorite DINOBOTS to the mega-popular PRIME world!
• A bold new world of TRANSFORMERS storytelling—in continuity with the hit TV show but blazing an exciting trail you can only see in comics!

Q: Hello Agustin. Thank you for doing this Q&A session. How is everything going with you?

Q: You are the artist for TRANSFORMERS PRIME: RAGE OF THE DINOBOTS. How does the challenge of draw large Cybertronians compare to the work you have done on G.I. JOE and DUNGEONS & DRAGONS: THE LEGEND OF DRIZZT?

AGUSTIN PADILLA: It’s been a very interesting change, because ’til now I’ve always worked with human characters—but working with mechanical beings and trying to show their personalities has been something exciting. Also, I was a fan of TRANSFORMERS, the TV show, when I was a kid, so this was thrilling to me.

Q: Who are your main inspirations as a comic book artist? Have there been many that have influenced your art style?

AGUSTIN PADILLA: I’ve had several influences; I grew up reading comics, and trying to draw what I saw on those pages. Among my favorite artists are Carlos Pacheco, Mike Mignola, Alan Davis, Silvestri, Madureira, Ramos, Charest…

Q: How did you come to be involved in the project? Was Transformers something that you’d always wanted to draw?

AGUSTIN PADILLA: I’ve always liked to work on series that I’ve enjoyed as a child, so when I got the chance, I prepared some tryouts and I was lucky.

Q: How much research did you have to do on the PRIME series before you started drawing the comic?

AGUSTIN PADILLA: Not many, I was familiar with most of the characters.

Q: Which of the main characters in the series have you found hardest to draw, and also the easiest?

AGUSTIN PADILLA: Truth is that most of them have the same difficulty, so I can’t really tell you any that were especially easy or hard.

Q: How long does it usually take you to complete an issue of ROTD?

AGUSTIN PADILLA: About a month.

Q: If you could write and draw your own Prime comic, do you know what story you would tell and what characters would be in it?

AGUSTIN PADILLA: I think that NEMESIS is a very interesting character. A Miniseries of him searching for the ancient Cybertronian artifacts buried on Earth could be cool.

Q: Has working on this series changed the way you work as an artist much?

AGUSTIN PADILLA: I’ve learned a lot. I had to develop my style more than in other projects, and also the narrative for a comic like this. That will help me on my future works

Q: What work will you be doing next after you have finished drawing TRANSFORMERS PRIME: RAGE OF THE DINOBOTS?

AGUSTIN PADILLA: Well, that’s something I can’t reveal yet.