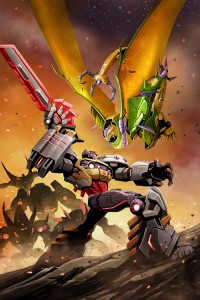 Artist Ken Christiansen dropped by to let us know he's updated his blog, Bad Flip Productions, with a clean version of the Transformers Prime: Rage of the Dinobots #4 cover. He's also posted some "making of" images leading up to the final product. Enjoy the images mirrored below, and visit Bad Flip Productions for more of Ken's comments on the technical aspects of bringing this cover to life.

Grimlock vs. Ser-Ket, as the other Dinobots look on.

The editor, John Barber, suggested a fight scene for the cover of the final issue, pitting these two against each other. I did a few sketches, and we both settled on this one, portraying the clash at the point just before impact. The full weight of Ser-Ket is bearing down on Grimlock, stinger poised, and Grimlock has his sword extended, ready for a downward slash - who will draw first energon?

Well, that was the idea anyway. I hope it comes across...

I honestly thought they were going to hug and have a tender moment before exchanging Christmas gifts.