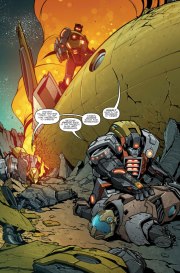 The official Transformers facebook page has shared an interview with Transformers Prime: Rage of the Dinobots artist Agustin Padilla. Where mirrored the interview below for those without facebook access.

Q: Hello Agustin. Thank you for doing this Q&A session. How is everything going with you?

Q: You are the artist for TRANSFORMERS PRIME: RAGE OF THE DINOBOTS. How does the challenge of draw large Cybertronians compare to the work you have done on G.I. JOE and DUNGEONS & DRAGONS: THE LEGEND OF DRIZZT?

AGUSTIN PADILLA: It’s been a very interesting change, because ’til now I’ve always worked with human characters—but working with mechanical beings and trying to show their personalities has been something exciting. Also, I was a fan of TRANSFORMERS, the TV show, when I was a kid, so this was thrilling to me.

Q: Who are your main inspirations as a comic book artist? Have there been many that have influenced your art style?

AGUSTIN PADILLA: I’ve had several influences; I grew up reading comics, and trying to draw what I saw on those pages. Among my favorite artists are Carlos Pacheco, Mike Mignola, Alan Davis, Silvestri, Madureira, Ramos, Charest…

Q: How did you come to be involved in the project? Was Transformers something that you’d always wanted to draw?

AGUSTIN PADILLA: I’ve always liked to work on series that I’ve enjoyed as a child, so when I got the chance, I prepared some tryouts and I was lucky.

Q: How much research did you have to do on the PRIME series before you started drawing the comic?

AGUSTIN PADILLA: Not many, I was familiar with most of the characters.

Q: Which of the main characters in the series have you found hardest to draw, and also the easiest?

AGUSTIN PADILLA: Truth is that most of them have the same difficulty, so I can’t really tell you any that were especially easy or hard.

Q: How long does it usually take you to complete an issue of ROTD?

AGUSTIN PADILLA: About a month.

Q: If you could write and draw your own Prime comic, do you know what story you would tell and what characters would be in it?

AGUSTIN PADILLA: I think that NEMESIS is a very interesting character. A Miniseries of him searching for the ancient Cybertronian artifacts buried on Earth could be cool.

Q: Has working on this series changed the way you work as an artist much?

AGUSTIN PADILLA: I’ve learned a lot. I had to develop my style more than in other projects, and also the narrative for a comic like this. That will help me on my future works

Q: What work will you be doing next after you have finished drawing TRANSFORMERS PRIME: RAGE OF THE DINOBOTS?

AGUSTIN PADILLA: Well, that’s something I can’t reveal yet.