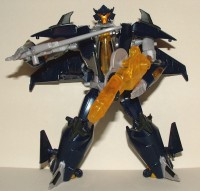 Seibertron.com member Azrail has shared a pictorial review of the recently released Transformers Prime Voyager Dreadwing. Check out this review below.

Hello again. This is the last of the new TF Prime releases I received last week.
So here is a look at Transformers Prime: Dreadwing. Voyager Class.
As always thanks again to Andy at Kapow Toys - http://www.kapowtoys.co.uk in the UK! There looks like no chance he will see a UK release in 2012 or at all! So I'm glad they got him in or I would have missed out.

This was a standard USA box release. For some reason Hasbro decided to add a yellow Powerizer area to his nose on the picture. Which is dumb as the toy doesn't have that!

The jet mode is excellent! A real nice deep blue and a good fun size to hold. Not too big, he transforms down quite compactly. There will be scale pictures later.
The cockpit is not designed to be open and you can shine a light through the back to make it.. um glow?

So on to the biggest issue to some with Dreadwing. He has a rubber fetish!

Some bigwig at Hasbro health and safety must have seen him. He has a black rubber nose cone, shoulder and tail fins, knees and.. head!
All the pointy areas have been made rubber. Some may find issues with theirs if it's been badly packed etc mine seems fine. The rear fins are the thinnest and bendy ones but mine have held there shape and look ok. The nose cone has a gap where it transforms which is annoying but it may have had that even in plastic.

He has visible hand syndrome but not head. It would be better if the fists were closed. The jet mode is so cool you won't notice after a while.
You can peg the Powerizer gimmick gun on his roof or some other immensely better weapon.

He has 2 ports under his wings which can hold his sword or a weapon. PRID Arcee's long gun looks good with Dreadwing.
There is a fold out front landing gear and 2 permanent rear ones. None of them roll.

The waist area folds out and does make a messy bit of kibble to break up his sleekness. You could always think of it as a bomb pod. There are a lot of pegs holding the areas tightly to his body which is good.

His transformation is a little tricky at first. A lot of joints and sliding areas. Rather like Bulkhead it's clever how it hides everything in a smaller form.
The hands are extended making it look a little silly holding weapons. Closed fists would have been better. There are 2 micron ports on his arms. There are 2 pegs on his waist to do with the transformation you maybe able to use for tiny port items.

His Sword can be held on his back as the same top port folds around to the back.
There are some hollow areas in the legs but compared to most deluxes he's pretty solid!

You can have the wings up high as it comes out of the box or down lower as it's meant to be. Personal choice but the way it's boxed is not the instruction way.

A good level of articulation. Ball joint shoulders and legs, swivel biceps, rotating hands, cut elbows, knees and feet. Some cool poses but the hands still bug me.
The other issue is the shoulders don't lock into place. Afaik. So they are always pulling down a bit looking odd.

A nice head sculpt but weirdly it's rubber! It seems to be pegged onto a yellow plastic piece for the light piping. Which is minimal but works. His eyes are painted but the rubber allows enough light through there only luckily. Kinda the best of both options.
The head is on a ball joint but very tight! Hard to move and having to hold a rubber head doesn't help. There's also a small gap before his neck and chest.

It comes with a light up Powerizer gun like Optimus Prime and a Sword. I've removed the light and put it back together and it looks a lot better.

The gun cannot be held underneath as it would need a longer peg which is a shame. I have seen mods online already people have done. I prefer other weapons, c'mon Dr Wu!

The sword is well detailed and I think reasonably accurate. Longer than RID Primes. This is hard plastic which is crazy considering every other area is rubber!
I prefer the nice new Dr Wu Matrix Swords! There is a purple evil crystal version too.

Apart from a few in my opinion minor issues I think Dreadwing is excellent! Decepticon Voyagers seem to get the better versions. He is really a great representation from the show.
Compared to PRID Prime the gimmick does not detract. He's closer to Megatron where the yellow blends in and looks ok. And unlike some *cough* Rumble *cough* he doesn't need Reprolabels.

He's started to appear in the USA already so go and get him!

Comparison scale pics coming in the next post. Please remember it's designed to be in scale with other Transformers Prime robots. Not the older Generations!
I hope you liked this review and will leave feedback or ask questions.

Comparison shots of Dreadwing with others.

He goes nicely with the deluxe jets being suitably larger to be the Leader.

Alongside the Cyberverse Commander version.

Alongside the Cyberverse Commander robot mode. Both cool figures.

With Generations Sky Shadow. A large Jet I would say and looks great together!

I may stick the gun together but right now it still folds.

Alongside Megatron and Breakdown Voyager versions.

Takara deluxe Jeticon and Skywarp. Both have tall back kibble and Skywarp is tall. Dreadwing could be taller but I think it's not bad myself.

Generations Sky Shadow looks like he could work with Dreadwing! The older Generations were taller but that's gone now and we have to accept it.

Re: Transformers Prime Voyager Dreadwing Pictorial Review (1417384)
Posted by Megatronsdemise666 on September 5th, 2012 @ 11:51pm CDT
His heads rubber?
Why the swords not lol

I was referring to the fact a lot of the deluxes lately have had hollow legs. Even Voyager RID has a somewhat hollow legs.
Re: Transformers Prime Voyager Dreadwing Pictorial Review (1417400)
Posted by Va'al on September 6th, 2012 @ 3:29am CDT
Excellent review sir!

I'm still holding back, waiting for Skyquake to appear, but you have definitely convinced me that I want this mold.

First comments like this piss me off... *epic eye roll*

I was referring to the fact a lot of the deluxes lately have had hollow legs. Even Voyager RID has a somewhat hollow legs.

That makes more sense. Thanks for clarifying.

First comments like this piss me off... *epic eye roll*

Then you don't have to read it. Ignore it, it shouldn't bug you that much.

Autobot032 wrote:I bought one. Fantastic figure. Though...I'd like to see Dr. Wu make a kit that replaces ALL the rubber bits on him. Especially the head. I have a feeling we'll see a slew of headless Dreadwings in the future. (Why rubber?!)

indeed. plus the gun.....the more I see it the sadder I become.