Transformers: Prime—Rage of the Dinobots #4 Preview 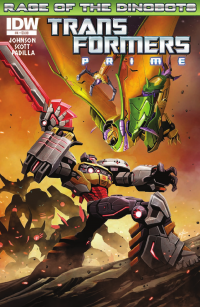 Our friends at IDW Publishing have supplied us with a preview of the final chapter in their Transformers: Prime Rage of the Dinobots miniseries. Be sure to pick up or download your copy tomorrow, for now enjoy the preview of issue four below.

Transformers: Prime—Rage of the Dinobots #4 (of 4)
Mike Johnson & Mairghread Scott (w) • Agustin Padilla (a) • Ken Christiansen (c)
DINOBOT WAR! GRIMLOCK leads the DINOBOTS against SHOCKWAVE’s troops—and the results won’t be pretty! With SWOOP under SER-KET’s control, it’s an all-or-nothing battle of DINOBOT versus PREDACON—with the fate of CYBERTRON hanging on every punch, blast, jab, and bite! Don’t miss the senses-shattering conclusion to this mind-blowing miniseries!
FC • 32 pages • $3.99

Bullet points:
The Dinobots tear up Cybertron!
Directly leads in to the future of TRANSFORMERS: PRIME!

Posted 2 days ago
News Categories: Toy News, Movie Related News, Cartoon News, Comic Book News, Site News, Rumors, Event News, Digital Media News, Collectables, Sponsor News, Game News, Site Articles, Store News, Company News, People News, Press Releases, Reviews, Sightings, Unlicensed Products News, Auctions, Transtopia, Interviews, Knock Offs, Collector's Club News, Editorials, Heavy Metal War, Podcast, Contests, Book News, Top Lists
Click here to post your comment about this news story!
Re: Transformers: Prime—Rage of the Dinobots #4 Preview (1465628)
Posted by Sodan-1 on February 19th, 2013 @ 4:52am CST
It didn't exactly have me on the edge of my seat, but it's the Dinobots, so I guess I'll pick it up.
Re: Transformers: Prime—Rage of the Dinobots #4 Preview (1465652)
Posted by Rhinox23 on February 19th, 2013 @ 8:07am CST
The preview didn't really reveal anything too shocking, but I'll definitely be picking this one up! I'm really interested to see how this will tie into TFP Beast Hunters. Also, from the recent IDW release, this story should continue in some way to explain what happens to the Dinobots (or at least Grimlock). I'm very eager to see this story line played out!
Re: Transformers: Prime—Rage of the Dinobots #4 Preview (1465826)
Posted by Blurrz on February 19th, 2013 @ 11:49pm CST
Rage of the Machines

(Spoiler free-ish)
The month of February brings an end to the latest IDW four issue Transformers series, Rage of the Dinobots. For those who have been enjoyed the 'of Cybertron' video games series, is a fan of the Transformers Prime universe, or likes the Dinobots in general, then Rage has been decent series. While not exactly at the same echelon as MTMTE or RID, Rage extrapolates the story left behind in Fall of Cybertron, although the series itself has been reminiscent of Movieverse comics.

Enter Shockwave. The Decepticon mastermind has been silent in the past three issues, with his goons doing most of the work to Ultra Magnus and the Dinobots. His characterization is much like the one in FoC, cold, calculated and always having a backup plan up his sleeve.

It is a shame that there has yet to be a signal of the Prime cartoon adding more Autobot characters to their roster, as Grimlock, the Dinobots, or even Ultra Magnus would add an even greater dynamic to the show.

I think one of the bright points of the entire series is the unmasking of Grimlock. Just a really nice touch by the artists.

Overall, Rage of the Dinobots has been a generic series that provides a link between the events of Fall of Cybertron, and to our current cartoon. I think from first glance it is easy to tell whether or not this is your cup of tea - the paperback will be released in May.

Re: Transformers: Prime—Rage of the Dinobots #4 Preview (1465828)
Posted by Mkall on February 20th, 2013 @ 12:14am CST
I've yet to get to #4, but I was hoping for something... more from this series. I remember the Maximum Dinobots series a couple years back; now THAT was an awesome Dinobots miniseries. This comes nowhere close. It feels like you could substitute the Dinos for any other Autobot Team and the same story would play out.