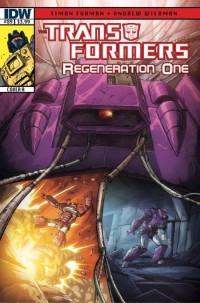 Transformers: Regeneration One scribe and Hall of Famer Simon Furman has updated his blog with a script wrap for issue #89, which is due out this week on the 13th. We also have panel preview from Stephen Baskerville. Furman's script wrap can be spoiler-ish so proceed with caution.

So, the penultimate chapter of the ‘Natural Selection’ arc, and things are about as bad as they can get. For Grimlock, in way, way too deep, even for him, and for his fellow Dinobots (Snarl, Swoop and Sludge) too. In fact, that trio of Dinobots (somewhat ignored since #86, and then seen only in flashback or dream-sequence) take centre stage here. Still at large in Scorponok’s new Iacon (with its more murderously inclined population), but only just. And guess what? They’re not the least bit happy about their commander’s alliance with Scorponok, whatever his ultimate motivations, to the point where the thing that’s uppermost in their minds is not so much survival, as putting their own house in order. Grimlock has defied ‘the code’, and that’s the biggest Dinobot ‘no, no’ of all. No happy endings are assured here. What else? Well, a whole lot actually. In the very core of Cybertron, Hot Rod faces an impossible choice, and learns the faith-testing truth about the entire Transformers race. Optimus Prime embarks on a mission to clear Earth of any remaining possible dangers (of Cybertronian origin), a task that sets him on a collision course with the Ark’s current inhabitants, and where we learn more about last issue’s ‘shock’ revelation. Plus, Ultra Magnus and the Autobots are on the home leg of their long journey back from Earth, unaware that the reception in Iacon is likely to be warm… in all the wrong ways!

Posted 2 days ago
News Categories: Toy News, Movie Related News, Cartoon News, Comic Book News, Site News, Rumors, Event News, Digital Media News, Collectables, Sponsor News, Game News, Site Articles, Store News, Company News, People News, Press Releases, Reviews, Sightings, Unlicensed Products News, Auctions, Transtopia, Interviews, Knock Offs, Collector's Club News, Editorials, Heavy Metal War, Podcast, Contests, Book News, Top Lists
Click here to post your comment about this news story!
Re: Transformers: Regeneraion One #89 Script Wrap and Preview Panel (1470958)
Posted by Rodimus Prime on March 11th, 2013 @ 5:55am CDT
I'm enjoying the revival of G1, even if it seems to be a shell of the original. I think Furman has lost a step or 2 when it comes to storytelling, but it's still better than the stuff I have seen from iDW until now, even though I didn't keep up with RiD or MTMTE. The art, however, is spot on. I love the way the characters and the backgrounds are drawn. Hopefully the next 11 issues will benefit from Furman getting practice with the 1st 9, and the story becomes sharper and more brisk. Otherwise, it's a great read.
Re: Transformers: Regeneraion One #89 Script Wrap and Preview Panel (1470968)
Posted by Va'al on March 11th, 2013 @ 8:05am CDT
Admittedly, he is trying to round up and finish telling all the stories left suspended in the original run, so some slow work is to be expected. In my opinion at least.

While I really enjoy the current IDW run, ReGen One has a very different feel to it, and is always a welcome read. I like Furman's work, Wildman's and Baskerville's art and JP's colours are really good. Will be sad when it's over, really.
Re: Transformers: Regeneraion One #89 Script Wrap and Preview Panel (1470992)
Posted by Janus Prime on March 11th, 2013 @ 11:07am CDT
"faith-testing truth"?... Oh man, I´m getting Beast Machines flashbacks!

Art and colours by Guido Guidi. Re: Transformers: Regeneraion One #89 Script Wrap and Preview Panel (1471034)
Posted by El Duque on March 11th, 2013 @ 3:21pm CDT
Chris Ryall has updated his Tumblr account with the alternate covers for Transformers: Regeneration One #89, due on shelves this Wednesday. The first features art by Guido Guidi, the second Geoff Senior. Check them out below.