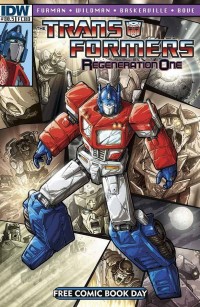 With Transformers Regeneration One #81 set to hit comic stands in just over a week, Writer Simon Furman has posted to his Wordpress blog a deconstruction of issue #80.5. Issue #80.5 was available last May during Free Comic Book Day and serves as a bridge from the original Transformers comic series and Regeneration One which is a continuation. Parts 1 and 2 are now posted with the promise of more to come. There are potential spoilers in the blog. Below are excerpts, click here to read the full blog.

Simon Furman wrote:before I get into the page-by-page (or pages) stuff, some of the preparatory background… What to include? How much to reveal? What flashback images were needed to build the foundations of Regeneration One? These questions had to be answered first and foremost. The issue needed to do several things: firstly, quickly establish the new status quo on Cyberton, then jump-start a conflict that has (mostly) been on hiatus for the last 21 Earth years, while ending on enough of a jaw-dropping finale to bring readers back for more. Oh yes, and recap 80 previous issues (plus the Headmasters mini-series). In 16 pages!! Rather than panic, which was my first inclination, I went back to the proposal document and looked ahead to the overall skeleton of RG1 that had been thrashed out between Andrew (Wildman), IDW and myself. And realized I maybe had a means to (kind of) begin at the ending, and in the process incorporate the flashback stuff into the narrative. I hated the idea of just stuffing in random pages of recap stuff. It felt clumsy. I wanted something organic that would pay into the overall circular nature of the larger story. With that in mind, I started to beat the issue out…

Simon Furman wrote:Page 1: Why ‘Counterpoint’? Well, one of the things Regeneration One will challenge is how we view the whole nature of the Transformer race, the Great War and — particularly — the Autobot/Decepticon schism. Later in the issue, Soundwave gives his ‘spin’ on the underpinning motivations of Megatron, and as we progress we’ll strip away some of the mythos and present a very different view of Primus and the grand plan. And what is Zero Space? Can’t tell you that, but by issue #100 you’ll know. There are clues, in #80.5 and in later issues, but it’s not just a random construct. It is something. It means something. So what are we seeing here? Both past and future. Yes, that is Jhiaxus top centre. He’ll be coming into things, in a G2ish kind of way, big-time once we reach the third (of our four) story arc. And that is indeed Circuit Smasher on the left. And yes, as described in the solicitation text for #83, he is Spike Witwicky. Looking good for a forty-something year-old, isn’t he? There’s a reason for that. Both he and Jhiaxus are key elements of Regeneration One, which why they’re up front. And all the past stuff is important (to greater or lesser extents) too. In fact, even the shape of the Zero Space effect is important. This is the only issue I’ve written (ever) where I’ve had to include separate notes (for the artist and editor), just to make sure all this fine detail and texture gets in there.

I've waited 20 years for this. My only quibble is bringing back Wildman and his fleshy faces. I'd love Senior or someone modern like Milne. I don't care if it looks like the old Marvel books as long as it continues on from them.

Storywise, I'm very hopeful. Just hope we get a few G1 newbies like Acid Storm, the Motorvators and Lugnut. Hopefully this series will remain the one G1 series that doesn't have the awful Alpha Trion.