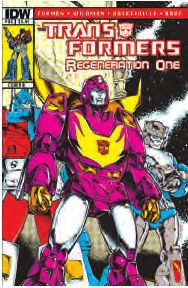 Here it is! Straight from the fine folks at IDW Publishing we have the preview for the highly anticipated Transformers: Regeneration One #81. Simon Furman and crew pick up where they left off all those years ago. Enjoy the preview below, and be sure to pick up your own copy on Wednesday. Seibertron.com's official review coming soon!

Transformers: Regeneration One #81
Simon Furman (w) • Andrew Wildman & Stephen Baskerville (a) • Wildman, Guido Guidi (c)
The TRANSFORMERS comic that began it all—is back. With a vengeance! 21 years have passed since CYBERTRON was restored to its former glory, and finally there is peace. But, after millions of years of bitter civil war, can all ever truly be one? In a conflict this primal, this epic and far-reaching... There are always “Loose Ends”!
FC • 32 pages • $3.99

This ReGen is looking better and better the more I see!
Andys artwork has never looks so good, very crisp in an old skool styley! Must be my memory of Marvels old coluring technique compared with the latest digital seperations?

If this is only going to run to issue 100, I hope a follow up keeping the same (re)generation and creative team is on the books?

PAGE 1: Bludgeon versus Kup, and we’re back in the original continuity. You guys have must thought this day would never come?

SIMON FURMAN: Yeah, it was strange (but nice) to slip back into this, and really tough to know how to start such an important issue. I’m always very aware of splash pages and not wasting them, so I wanted a big, bold image to kick off with, preferably action-orientated. The title of the story (back on the splash page – another nod to the old Marvel G1 comic), and the first story arc, is “Loose Ends,” and I wanted to establish exactly what that meant (and who those loose ends were) right up front. Of course, it’s kind of a “knowing” title too, because part of what we’re doing with Regeneration One is tying up loose ends. And Bludgeon? Well, to me, he’s one of the most visually exciting of all the Transformers, and Andrew always seemed to like drawing him, so it just made a lot of sense.

ANDREW WILDMAN: Are we really doing this thing? Amazing, isn’t it. I thought that it may come around at some point given that there has always been so much interest in that old storyline but to finally be here is a little odd. Feels like one of those ’80’s band revival things. Let’s hope it satisfies the 20 year wait. That opening page certainly gets things going with a bit of velocity.

STEPHEN BASKERVILLE: I thought two things when I saw Andrew’s pencils for this page; the first was “Wow, that’s exciting!,” and the second was “Yikes! Look at all that background jungle stuff I have to ink!”

JOHN-PAUL BOVE: My reaction was “look at all that background jungle stuff I have to color!” I wanted to have a slightly sickly look to the environment to emphasize that it’s not Earth.

PAGE 2: Kup kicks butt! Why start with him and not another character? And is it hard to find these characters again from where they were left off?

SIMON FURMAN: Why Kup? Well, it’s Kup’s agitation/restlessness/sense of unfinished business that drives the story (at least initially), and counterpoints Optimus Prime’s more head-in-the-sand attitude. And Kup just has that abrasive/outspoken edge to him. To me, he’s that guy who — when the sergeant major or whoever asks his unit if anyone has anything to say, fully expecting no one to open their trap — Kup speaks his mind, not caring who he ticks off or minding the consequences. I felt I had Kup’s voice again really quickly. But I always have the animated movie in mind when I write him, so that helps.

ANDREW WILDMAN: I started with Kup because it said Kup in the script. Would have been weird to draw someone else in his place. Seriously though, he is a great character and a safe pair of hands. And so is Kup. A good place to start.

STEPHEN BASKERVILLE: Kup is like Wolverine~ he’s kind of pugnacious. It’s there in Simon’s script, of course, but you also see it in that “bulldog” face that Andrew gives Kup.

JOHN-PAUL BOVE: I think Kup’s one of those characters who you could not only imagine thinking he could take on these heavy hitters but that he may actually stand a chance. He’s a character that could never be sitting still for too long.

PAGE 3: Kup kicks more butt, and gets interrupted by Springer. Was the sense here to convey just how good Kup still is, but something isn’t quite right?

SIMON FURMAN: Trust me, there’s a payoff to the simu-combat sequence and how it ends (and who Kup doesn’t “bag”). But yes, I did also want to convey that Kup isn’t as tough or infallible as he thinks. He wants to take on the world but his gung-ho, hell-for-leather attitude has its own consequences. And part of the reason for starting with the simu-combat (apart from getting some meaty action and character re-introduction right up front) was to underline just how restless these guys are. They want to hit something (other than holo-pixels), and that ultimately puts them at odds with Prime and Ultra Magnus.

STEPHEN BASKERVILLE: Art-wise, panel 2 has one of those “iconic” action shots that Andrew’s so good at—would’ve made a great cover image too…

JOHN-PAUL BOVE: I used a very subtle 8-bit pixel effect where Springer walks through the hologram. For a continuation of a book that started in ’84 it seemed appropriate!

PAGE 4: Kup and Springer leave the holo training area and we see the Wreckers! Were these guys ALWAYS going to come back no matter what?

SIMON FURMAN: Well, I never quite understood why they (and Ultra Magnus) never made the leap from UK to US back in the day. So yeah, I really wanted to rectify that. And it hasn’t escaped my attention that Nick [Roche] and James [Roberts] made the Wreckers quite current and cool again [in Transformers: Last Stand of the Wreckers], so that probably influenced my decision. But c’mon, wouldn’t you want the Wreckers back? And it was a nice chance to get a couple of UK nods in there, in what is essentially the US continuity. Not just the Wreckers but a certain member (or is that members?) of the team – Rack ‘n’ Ruin.

ANDREW WILDMAN: I had forgotten how much stuff I thought I didn’t even know in the first place. Who are all these people? What is “Wreckers”? Getting back into this world of Transformers (and Simon’s head) is a challenge. There are characters here that I know well and its nice to see again and characters that I was not familiar with. Rack & Ruin?!? All good stuff though.

STEPHEN BASKERVILLE: Yeah, Simon’s Transformopedic head must be a must be a strange place indeed! I need a scorecard to follow all the characters.

JOHN-PAUL BOVE: As a UK reader, it was very exciting to see this group come back. I had to make some changes to color schemes, most notably Springer, who’s been portrayed a few different ways. Now he sits somewhere between his toy colors and his comic colors.

PAGE 5: Kup, Springer and Ultra Magnus are obviously frustrated by Optimus Prime’s lack of action over recent events (see Regeneration One #80.5, our Free Comic Book Day comic). We can only assume here that this frustration could well boil over at some point?

SIMON FURMAN: For sure. I’m a little worried that Optimus Prime's (initial) stance/attitude is going to annoy some fans, who want to see Prime back in action/kicking butt. But remember he’s been through a lot. He died. He actually died. And was then brought back to life. It’s gotta affect a person. And after however many million years of constant war and strife and loss, wouldn’t you try and cling to peace, even if you know somewhere deep down that it’s an illusion? And there’s a sense of torch-passing that runs through the entirety of Regeneration One, and in this transitional space is very much where we join Optimus.

ANDREW WILDMAN: This is where it gets really interesting. Simon and I had a lot of conversations about what we were going to do with this book and this scene really is the beginning of that. It is the beginning of the thing that will have this book stand out from the others books and any movie made or being made. This is our Optimus. This is the one who we left at the end of #80 and is THE difference. Can’t say more than that at this stage.

STEPHEN BASKERVILLE: I think Andrew’s being too secretive. Well, what happens is—just kidding! You’ll find out in good time, readers…

JOHN-PAUL BOVE: I think what’s interesting is that Kup and Magnus in another time and place could be in charge so you tend to respect what they think. They also have a huge respect for Prime so there’s a struggle there between loyalty and action. Sooner or later something’s gotta give!

Re: Transformers: Regeneration One #81 Preview (1399319)
Posted by Banjo-Tron on July 11th, 2012 @ 3:14pm CDT
Wow, what in interesting read. It's really great to see the old gang back again, ably assisted by a new face. Just seeing Roadbuster again makes me feel like a 11-year old. What confuses me though, is did he not die during the events of 'Timewars'? I mean, he was utterly

Timewars is UK G1, this continuation of US G1 in which this is the first appearance of the Wreckers.

I thought that US and UK are the same continuity, with the exception of the later 'Earthforce' stories? SF went to great lengths to keep them aligned (2 megatrons)
Re: Transformers: Regeneration One #81 Preview (1399508)
Posted by Chaoslock on July 12th, 2012 @ 2:35am CDT

Autobot-Hellstriker wrote:I cant believe that holo sim batte, Kup taking down 2 of the most fiercest warriors in the galaxy with relative ease? No chance.

He chose the "EASY" difficulty. (and probably used some cheat codes, too...)