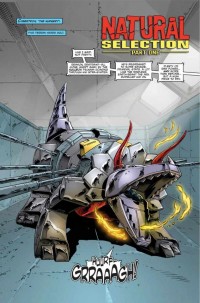 The official Transformers facebook page has posted the Creator Commentary for this week's new comic release from IDW Publishing, Transformers: Regeneration One #86. Hall of Fame writer Simon Furman gives us his thoughts of the first five pages below, which we've mirrored for those without facebook access.

PAGE 1: the Dinobots are being held captive on Cybertron, five years in the past and suffering the after effects of nucleon. Having done so much with the Dinobots, is there more you can do with this group of characters?

SIMON FURMAN: To my mind, there’s always something else you can do with the Dinobots. But seriously, yes, I think so. In this second arc, we push Grimlock way over the fine line he walks on a day-to-day basis, and though it’s kind of a noble instinct, inspired by the others’ predicament, that drives him to the place (of no return?), the lengths he’s willing to go to, the trusts he’s prepared to betray, are going to cost him big time—and irrevocably. I wanted this time around to get right under the skin of this tightly-bonded and often fractious relationship the five Dinobots have, and their relationships both to the other Autobots and to some of their enemies. I intend to draw parallels between Grimlock, an Autobot outsider, with a Decepticon character who was originally painted as an outsider himself.

PAGE 2: Grimlock is facing the other angry Dinobots, observing other side effects of nucleon on other Autobots. Can you remind anyone who may not know or remember what happened with nucleon in previous issues and how these characters came to be where they are now?

SIMON FURMAN: Nucleon’s a kind of wonder-fuel that Grimlock went in search of back in issue #69, but it’s kind of a two-edged sword. It can grant or even boost your powers/natural abilities, but often (though by no means in all cases) there’s a price. So with Grimlock it made him stronger and faster, but it also robbed him of his ability to change modes. Basically, Grimlock (in his naturally blinkered way) ignored all the warnings in order to bring the Dinobots (and a whole bunch of Autobots) back from the brink of death (after Starscream’s Underbase rampage in #50). Inevitably, as with Grimlock himself, there were side effects. Some are tiny, barely noticeable, some though are huge and debilitating and the Cybertronian in question is either driven to the brink of madness by super-enhanced abilities (like Blaster) or become a danger to themselves and others (like Inferno).

PAGE 3: We’re seeing what happened to Grimlock and how he became an Action Master (sacrificing the use of his alt mode). Was this a planned revisitation of the old story thread or something that came up while you were doing research for the series?

SIMON FURMAN: This was definitely one of the story lines that was planned before we knew #80 was the last issue of the Marvel run, but I never got a chance to see through. What changed was the chance to wrap this into another kind of loose end, which was the fate of the heads of the original Headmasters (last seen in their own right back in the HEADMASTERS mini-series). Not sure if I’d have come up with that kind of mutual solution back then or not. And it gave me a chance to bring back one my favourite characters from my original run on the book, but explore him in an all-new way.

PAGE 4: In the present day, Grimlock is being held captive by Scorponok. Last time we saw Scorponok was when he died on Cybertron. Do you have personal bond with the character as you do Grimlock, after using him in previous IDW comics?

SIMON FURMAN: Yes, I like Scorponok a lot. Much as Grimlock, he seems to have his own ideas about allegiance and strategy, that don’t always jibe with the leadership. The Scorponok I inherited back then was the Lord Zarak version, and it was fun to muddy his tyrannical nature with this more conflicted (intrinsically noble) character. And this Scorponok is yet another version, more like the original (because he is the original) but not the same as back then. Because he’s shared a mind in the interim — and evolved. It’s affected him, just in a slightly different way. It’s great, I get to do that whole ‘same but different’ thing.

PAGE 5: Scorponok begins conversing with Grimlock about nucleon and what it’s shown him. It’s sounding like Scorponok is going to send our friendly Dinobots through a few levels of hell to achieve his goals.

SIMON FURMAN: Yeah, much as Scorponok NEEDS Grimlock for his plans, there’s a kind of sadistic relish in the way Scorpy dangles temptation in front of his optics. Scorponok instinctively recognizes a kindred spirit in Grimlock, two outsiders together against the worlds (or worlds), but he’s using him, plain and simple. Is he also underestimating Grimlock? We shall see.

Rodimus Prime wrote:...? Megatron is dead. There's not a better way to signal the end of a story arc than to have 1 of the 2 major characters offed. For good. His mind was destroyed along with Ratchet's, and his body was rendered useless by Prime destroying his spark. He's dead.

Right, this is the end of the Megatron story. 3 or so more threads were going on as we had the Megatron arc going on. Honestly, I feel that we are going to get four, 5 issue arcs each focusing on one villain. First was Megatron, hungry for Optimus' attention and thus destroyed humanity. 2 is Scroponok and his power play for Cybertron. 3 and 4 will probably be Galvatron and Thunderwing in whatever order with Unicron coming back in the end. I mean this is really simple to figure out.

Megatron had to die given the premise of the story. This was billed as their final battle.

Also Galvatron = a Megatron from another universe. So one Megatron had to die before the other unless you just wanted a huge slaughter fest with no plot.

Also, insofar as Optimus vs Megatron battles are concerned we did have the Transformers movie (G1) that killed off Optimus but had a plot afterwords right?
Re: Transformers: Regeneration One #86 Creator Commentary from Simon Furman (1445063)
Posted by Rodimus Prime on December 8th, 2012 @ 8:57am CST

burning_sirius wrote:Megatron had to die given the premise of the story. This was billed as their final battle.

Right. That's exactly what I said.

Also Galvatron = a Megatron from another universe. So one Megatron had to die before the other unless you just wanted a huge slaughter fest with no plot.

I don't understand why you would answer this, I didn't say anything about Galvatron. But now that you bring it up, he is a reincarnation of Megatron, even if from another universe. So Megatron could return, if some sort of reverse-engineering (de-evolution?) were to be done on him, probably only by Primus (possible) or Unicron. Which is a LONG shot, considering Unicron was also killed by Optimus, at least his body was destroyed. So it's not impossible that he would return. But I doubt that going at the current rate of speed and complexity of the stories, it can be properly done in the next 14 issues, not with all the other stuff going on.

Also, insofar as Optimus vs Megatron battles are concerned we did have the Transformers movie (G1) that killed off Optimus but had a plot afterwords right?

Yeah. I didn't say that Megatron's end was the end of ReGeneration. I just replied that only Megatron was dead, bringing the 1st story arc to a conclusion.
Re: Transformers: Regeneration One #86 Creator Commentary from Simon Furman (1482778)
Posted by Va'al on April 28th, 2013 @ 4:18am CDT
Oh never mind.