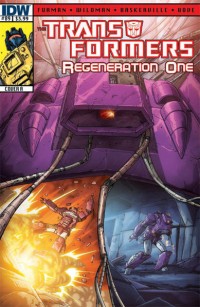 The Transformers: Regeneration One is nearing its half-point in its twenty issue tenure. Much has happened in the previous issues, unfortunately to the chagrin of the Autobots. Always outgunned and out-manned, the odds are against them as Scorponok's Gene Key has made its way throughout the majority of their forces. RGO #89 is not the most face paced issue of the series, however it helps connect the dots and raise the bar for issues to come. While a handful of characters make their appearances in one page snippets, the issue mainly focuses on Grimlock and Hot Rod. Grimlock has been a rather overused character in recent months ever since the release of Transformers: Fall Of Cybertron. I appreciate that RGO has shed a different light on the character of Grimlock, as he is more independent and critical of his actions. This is much better rather than being the unintelligent, animalistic one-dimensional goof he has been in other Transformers Media. Sure, he may show signs of that behavior, but it isn't a gimmick. The same could be said about the other Dinobots, as they are not being used as a gimmick, rather I feel that they have a personality that is unique to themselves. Looking at Hot Rod, he is a character, regardless of whatever Transformers series it is, that I love to follow. All of the action seems to surround him, and that does not differ in RGO #89. This issue he faces a choice between two relics from Cybertron's past. The way that this scene is done artistically, and dialogue wise is a very nice touch and probably the highlight of this issue for me. In other character camps, we have appearances by Optimus Prime and Shockwave as well as Ultra Magnus and his crew. Scorponok's plans and the events that occure in #89 are setting up the upcoming issues for some intense action. Transformers: Regeneration One #89 is available today, and if you are a fan of the series, there is no doubt that you will be happy with this issue. Mkall wrote:Honestly I'm liking this series far more than I was expecting. It has enough of the campy dialog and random plot maguffins that harken back to the original series.

MTMTE is still my favourite series though.

I knew I was gonna like this series when I read 80.5. Probably the only time a free comic book had an important plot point for the rest of the series.

Hot Rod's story arc isn't the most interesting subplot, but I love the current take on Scorponok. Looking forward to more of that, though he'll probably be dealt with by the end of this arc... shame. Still, at least a lot happens in the space of each story.

I'm getting this in TPB format but what I've seen is tremendously promising.