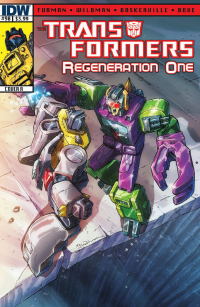 Transformers: ReGeneration One writer extraordinaire Simon Furman has shared on his blog a Script (W)Rap for this month's issue 90. The text is posted below.

Out this week (April 10th), the rip-roaring conclusion of ‘Natural Selection’, the second searing story arc of Transformers: Regeneration One. We’re midway though, halfway to #100… already! How’d that happen? Yep, RG1 issue #90 hits stores this week, and as is standard here’s my post-script musings on the issue, avoiding anything too spoilery… but of course it contains a certain amount of stuff you may or may not want to read at this stage, so you have been warned. Right then, get ready for a truly packed issue, with pretty much wall-to-wall action (on various fronts, levels and depths of Cybertron… and Earth!). The main thrust of the issue is, of course, the final showdown between Grimlock and Scorponok, which plays out rather tantalizingly above the Sonic Canyons, as Scorponok prepares to fire his monster-sized Gene Key, converting (en masse) every right-minded Autobot or Cybertronian citizen on the planet, freeing their inner beast. Could it happen? Could the entire planet soon be ripe for true, unchallenged Decepticon rule? Not if Grimlock’s got any say in the matter, but at this stage, what can he do? We all know he’s not as dumb as he makes out, but does he really have a last minute, game-changing strategy of his own, or it all just a doomed tilt at an already lost cause. Whatever happens, the reverberations from Scorponok’s dark reign will continue right to the very end of RG1. What else? Well, there’s Ultra Magnus and the Autobots returning from Earth, blissfully unaware that they’re headed into a firestorm of their own, there’s Hot Rod at the core of Cybertron, discovering things he’d rather not have known about their creator, Primus, and Optimus Prime, on a collision course with future Decepticon Galvatron. Or not. Trust me, after this one, nothing will ever be the same again… for anyone!

Posted 3 days ago
News Categories: Toy News, Movie Related News, Cartoon News, Comic Book News, Site News, Rumors, Event News, Digital Media News, Collectables, Sponsor News, Game News, Site Articles, Store News, Company News, People News, Press Releases, Reviews, Sightings, Unlicensed Products News, Auctions, Transtopia, Interviews, Knock Offs, Collector's Club News, Editorials, Heavy Metal War, Podcast, Contests, Book News, Top Lists
Click here to post your comment about this news story!
Re: Transformers ReGeneration One #90 Script (W)Rap (1477562)
Posted by Bouncy X on April 8th, 2013 @ 8:29pm CDT
did someone leave scorponok in the dryer a little too long?
Re: Transformers ReGeneration One #90 Script (W)Rap (1477563)
Posted by Optimus21577 on April 8th, 2013 @ 8:30pm CDT
What day is this one released, wed? It's been really enjoyable watching this unfold. Though I have to admit I'm a lil worried with as to where they're taking it. I've enjoyed it so far though, don't let us down guys, and for the record.
Killing Prime is a, "No No!".
Just thought I'd throw that out there.

Simon Furman wrote:Optimus Prime, on a collision course with future Decepticon Galvatron. Or not.

omarvance wrote:This issue was much better than 89 but left so many questions. Obviously one would be who survived the fall? Another is where is Fort Max's head and why don't they build him a new body??

You would think if they could take the heads of the other headmasters and build their bodies around it then they could rebuild Fort Max..

I so hope they do not kill Grimlock and find a way to save him from his fall....
I love how Perceptor was playing bad guy.. I figured something was odd last issue when he and scorpy got into it..

This series is definitely taking an interesting turn..