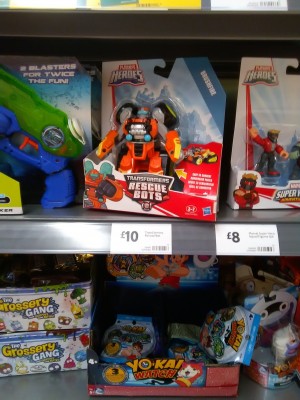 The UK seems to be getting it's chance at some ATV-bot action as, thanks to TFW2005 user Underlord, we know that Rescue Bots Brushfire has been seen at UK retail! The new Griffin Rock bot was spotted at Morrison's for £10. Check out the photographic evidence below! 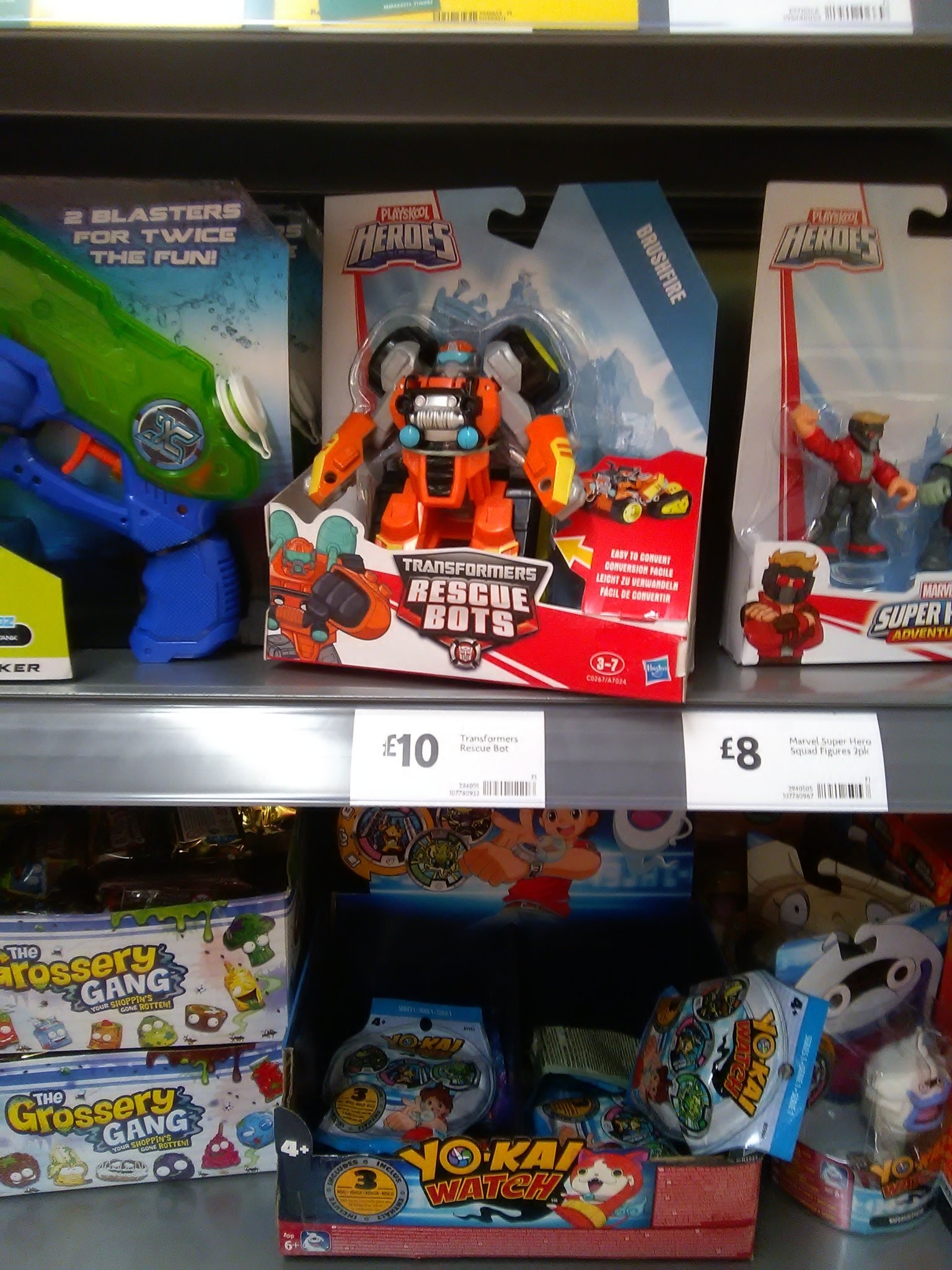 Posted 2 days ago
News Categories: Toy News, Movie Related News, Cartoon News, Comic Book News, Site News, Rumors, Event News, Digital Media News, Collectables, Sponsor News, Game News, Site Articles, Store News, Company News, People News, Press Releases, Reviews, Sightings, Unlicensed Products News, Auctions, Transtopia, Interviews, Knock Offs, Collector's Club News, Editorials, Heavy Metal War, Podcast, Contests, Book News, Top Lists
Click here to post your comment about this news story!
Re: Transformers: Rescue Bots Brushfire Found at UK Retail (1875462)
Posted by DR0hNO on April 19th, 2017 @ 8:21am CDT
I saw him in the same morrisons and was going to send you guys it!
Re: Transformers: Rescue Bots Brushfire Found at UK Retail (1876028)
Posted by Hellscream9999 on April 21st, 2017 @ 9:02am CDT
Fellow Seibertronians, following up from their recent discovery, it would seem that this new wave of Rescue Bots are already making their way to retail shelves. TFW2005 member ahchu managed to find both Twinferno Heatwave and Optimus Prime at a Walgreens in Danville, California, as can be seen below. So, now that we know they're out there, are any of you going to set back out on the hunt, let us know in the comments below. 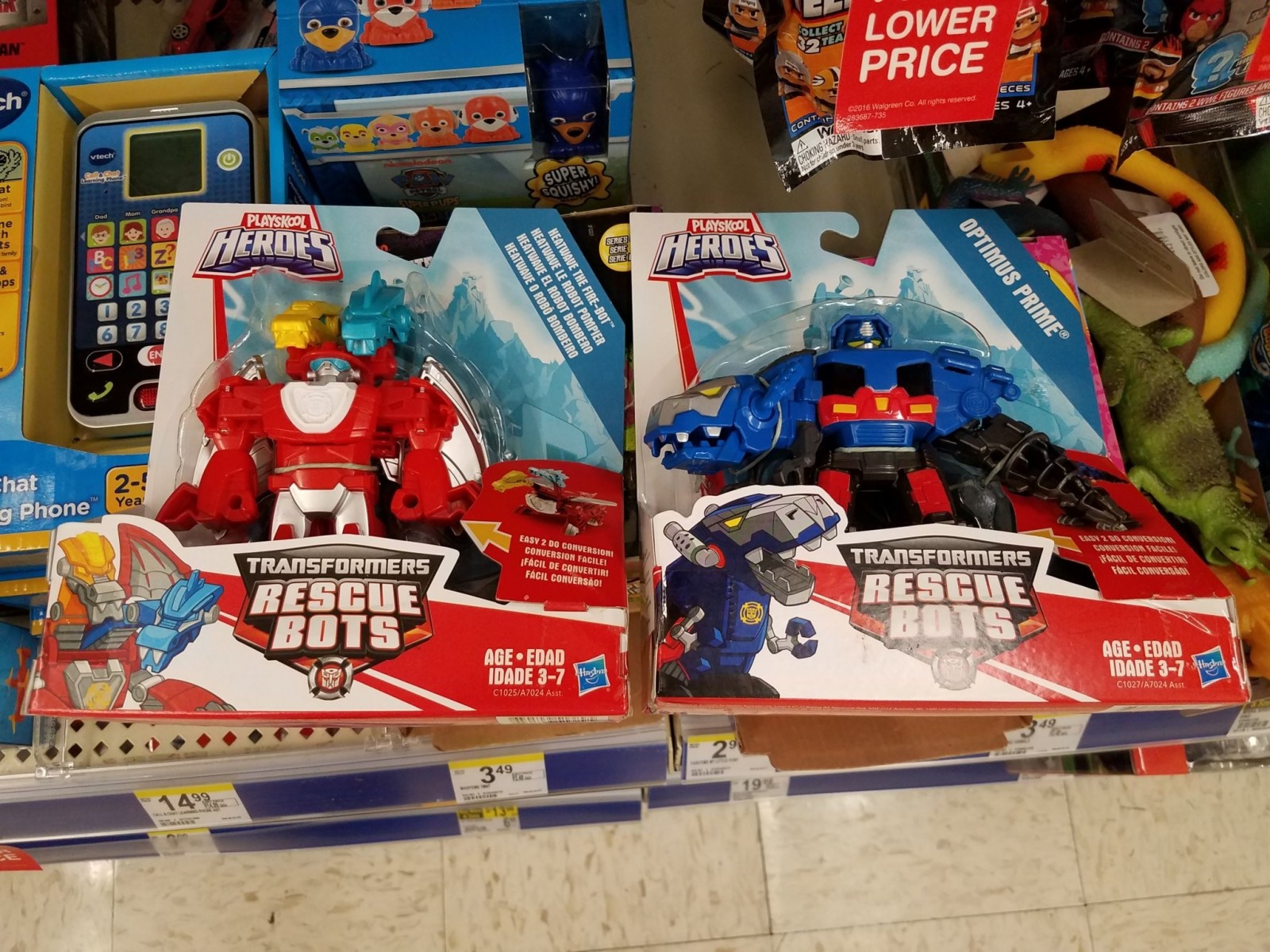 Oh and I also got Sequoia and they do work quite well together.

When I have time i'll take some pics.

Also Smyths have a listing up for those small 3 packs of auto-transforming Rescuebots - that are somewhat like Botshots cross with Gravity bots.

I also hear B&M Bargains are selling the pull back and go Racecar Bee and Sideswipe - though I've not seen them myself yet. 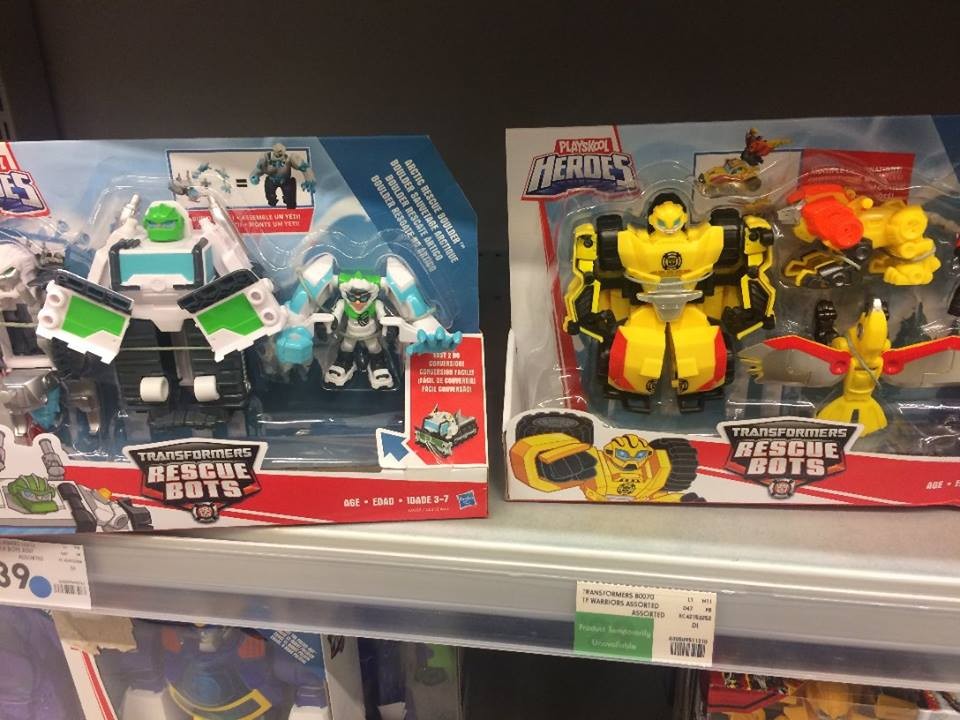 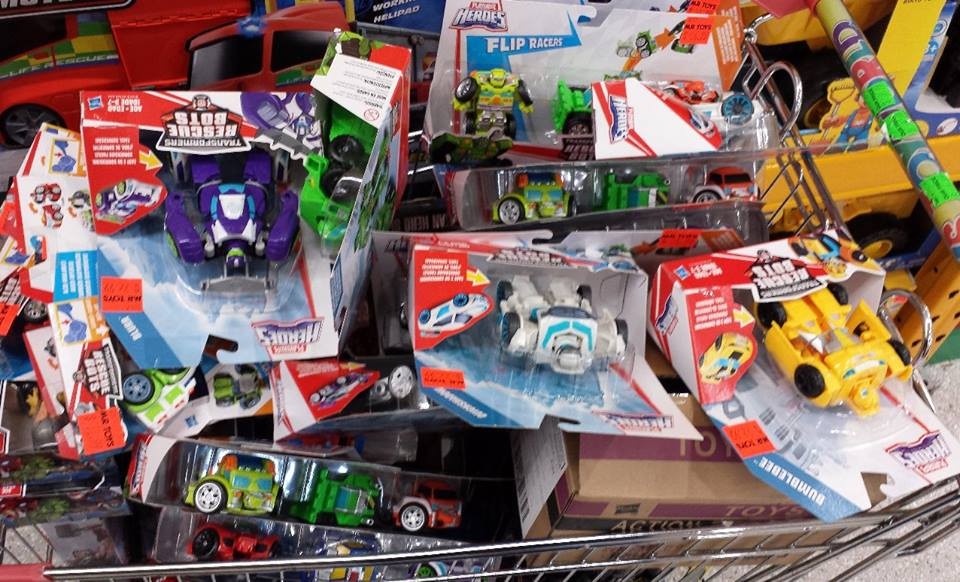 Re: Transformers: Rescue Bots Brushfire Found at UK Retail (1879418)
Posted by RAR on May 5th, 2017 @ 7:36am CDT
Those Rescue Bots we were talking about earlier have a Smyths listing now :

I just wanted to pass on an eBay offer that might be useful :

(there are a number of similar ones described that you can find on a bunch of regional eBays).

I'm mentioning this one as I managed to sweet talk them into accepting an offer price on the item that got it under £14.99 (equivalent in USD$)

I had to try a bunch of them to get this but for UK board members for customs reasons this might be useful.

4 Rescue Minicons for an OK price - they should work out more of less the same as the eventual Entertainer sales would. and The Entertainer don't have all of them anyway.

And remember these Minicons are compatible with normal Transformers too.
Re: Transformers: Rescue Bots Brushfire Found at UK Retail (1881037)
Posted by Bronzewolf on May 11th, 2017 @ 4:23pm CDT
Today, thanks to a user off of TFW, we know that the new Rescue Bots mini-con Swift has been found at US retail! While we saw wave mate Sequoia hit retail about a month ago, we have yet to see Swift on shelves until today! Check out the pictures below, confirming he's going for the running rate for these figures; $4.99 USD. 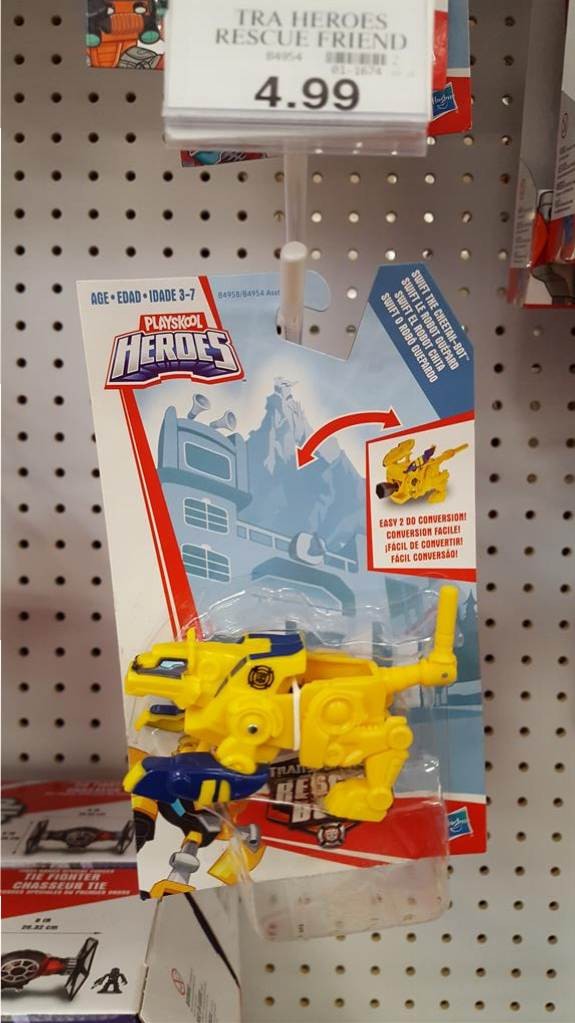 I really must get the police station with husky before they vanish - but I have not got around to it yet - now I have ordered 4 Plus the Sequoia I already have (and the dog I already have from the Garage playset) I just need to get the red Dragon and the two new dragons sold with the new Bumblebee that just got a listing : Transformers Rescue Bots Knight Watch Bumblebee : 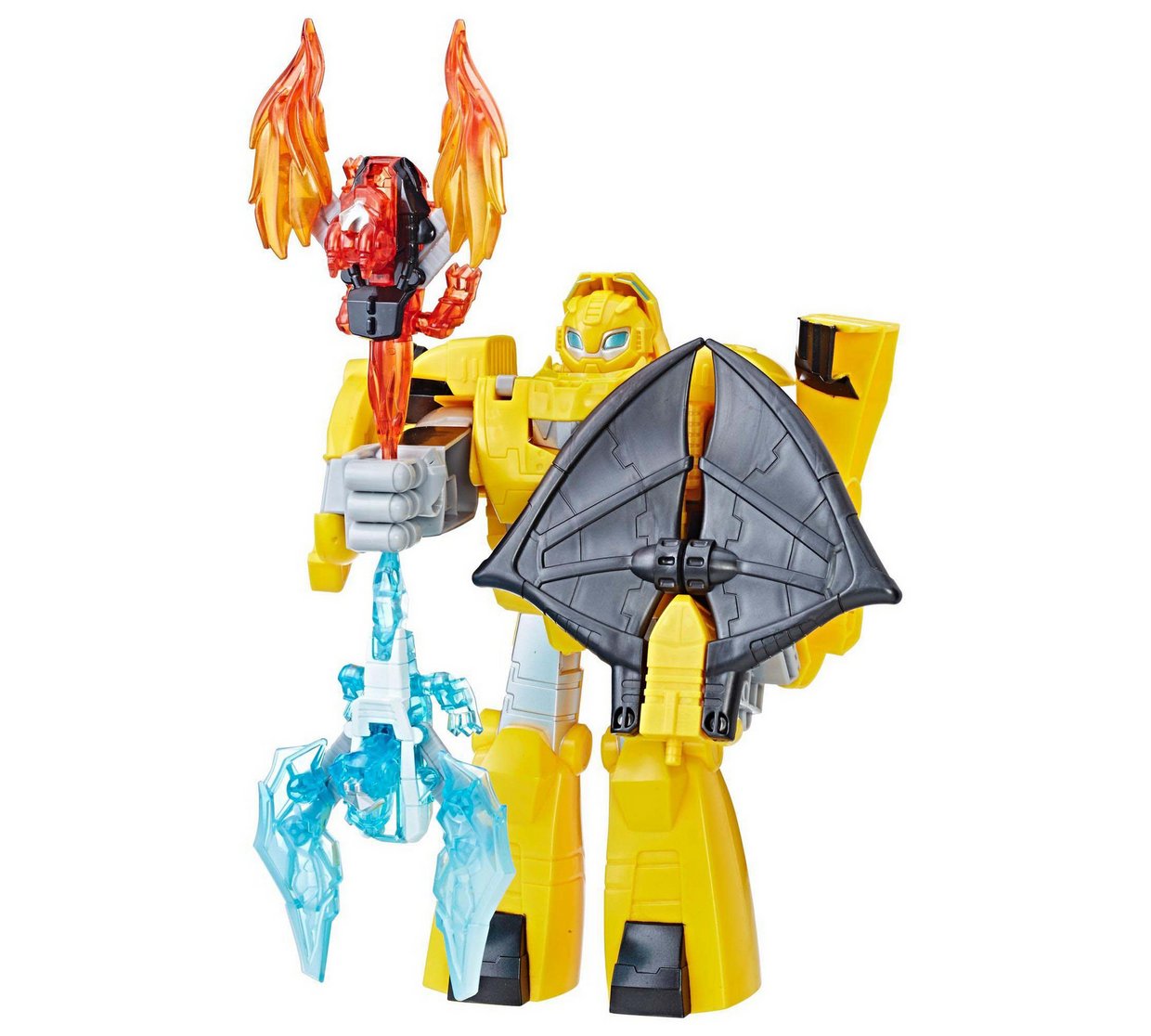 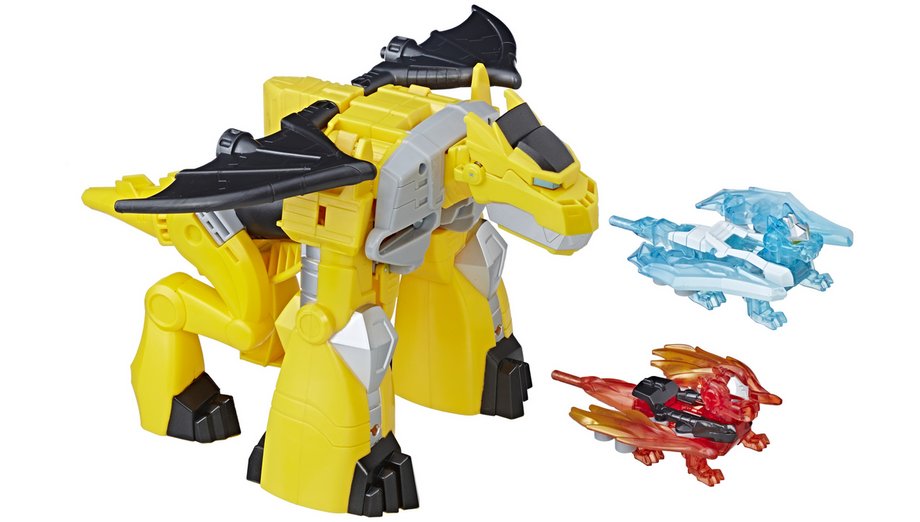 http://www.argos.co.uk/product/7073353
Re: Transformers: Rescue Bots Brushfire Found at UK Retail (1881247)
Posted by Bronzewolf on May 12th, 2017 @ 11:50am CDT
Seibertronian RAR has pointed us toward a new listing on the Argos website for Transformers Rescue Bots Knight Watch Bumblebee! We previously saw this version of Bee at Toy Fair, but this is the first we've seen of a listing for the figure as well as stock photography! The description illustrates how Bumblebee can turn into a dragon, and his two Mini-con buddies can combine into his battle axe. The description also strangely mentions that, even though the figure is part of the Rescue Bots toy line, he was "inspired by the New Transformers Movie". Take that as you will, here's some of the stock photos for the figure, and you can click on either of them to be taken to the Argos listing! 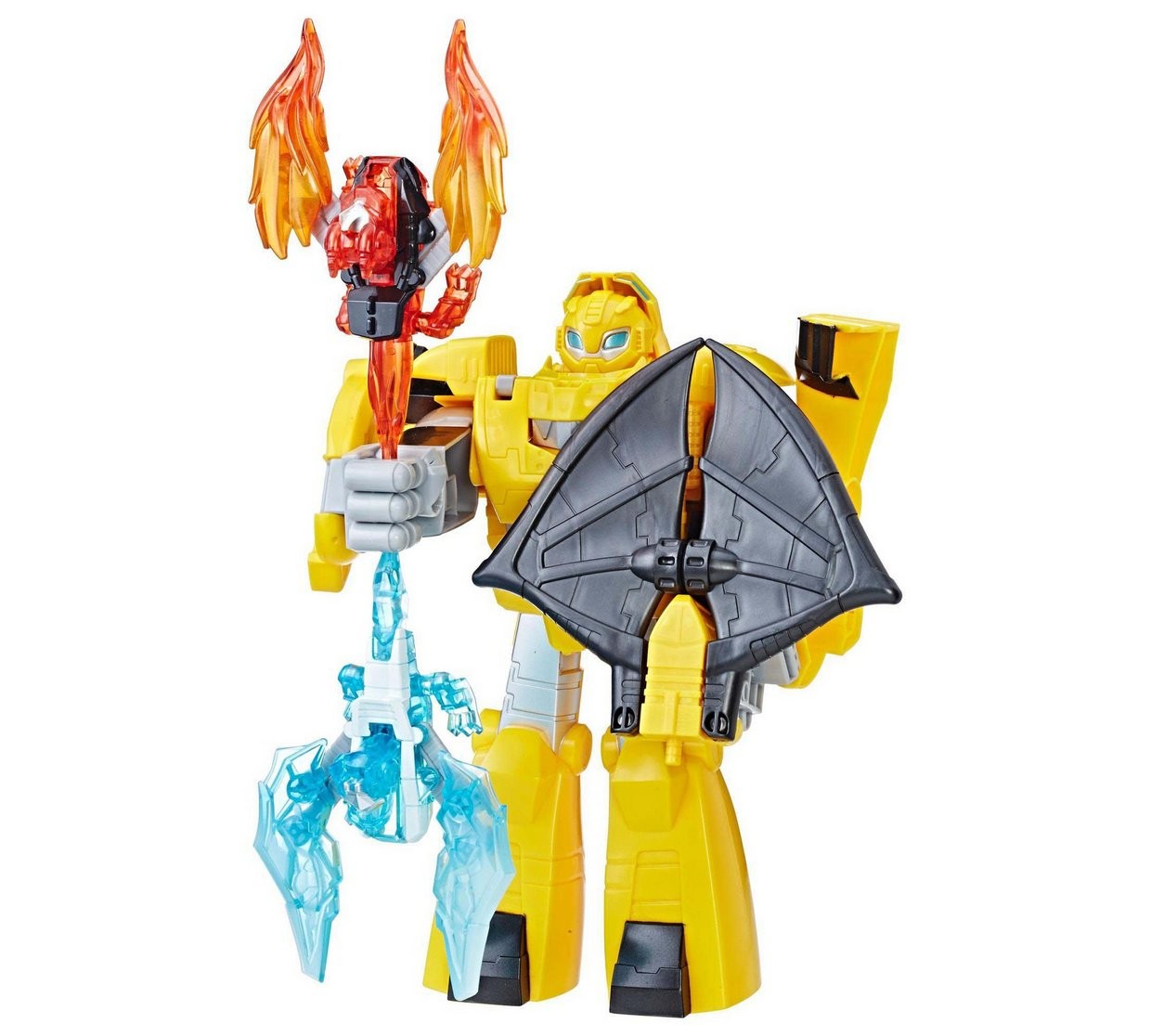 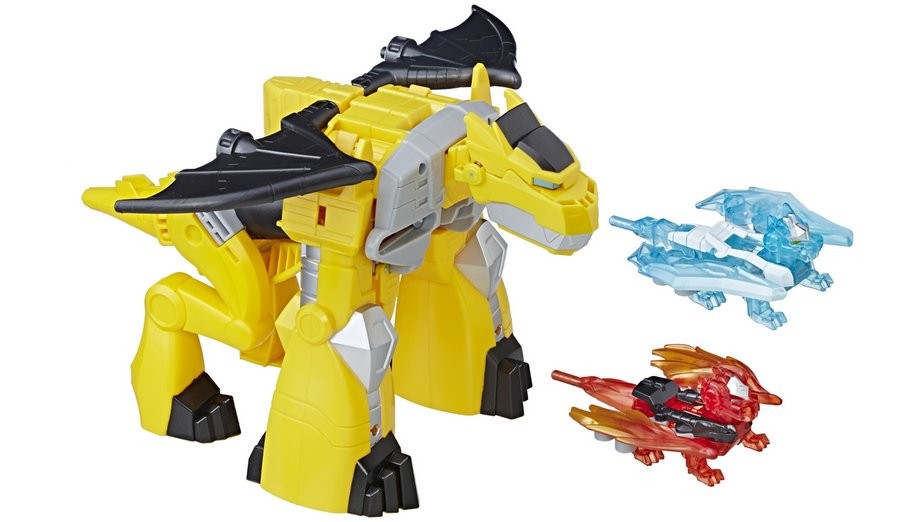 But as to the others :

SWIFT : The Cheetah-bot : Well he has no joints aside from his tail which is a bit disappointing being able to fold his legs up would have helped a lot - but his mechanism to rotate the hex-nut on a car wheel is fine and works up both ways - he's more sized to a larger bot though . as a standing piece in cheetah mode he looks nice though. Perhaps needed a little paint on the back legs though

Fireplug : (no sub-title on this one) looks nice enough as a Dalmatian. Transforms easily - no real joints in dog mode be he displays well and is decently painted. - has storage for the water effects part semi-recommended - but might be better value bought with the playset

Servo ( I could swear I saw this listed as DUKE somewhere).
modestly painted looks decent from a distance - but looks a little gappy up close. Nice dog face the drill spins nicely - but only works one way up and unfortunately that is the way that look worst - his tail is a little short that might cause some problems with him being held.
So buy him mainly if you want to give Codie or Boulder a dog.

VALOR : The Lion-Bot (though he actually looks a lot like a Bulldog)
The mechanism looks a bit naff on his claw mode and he's very gappy due to the way he transforms - but he goes nicely with chase - the tail and handle do kinda have some issue with the way they move that they get in each others way a bit and the handle doesn't really do anything more than just sit there in beast mode. Looks OK from a middle-distance and if they ever make a Mega-Chase he'd probably look good with that.

Overall I'm pleased with them - I bought them mainly for their animal modes and they look nice in beast mode - so i'm happy.
Price was good and I will do my best to complete the collection with Bee's two little dragons and the police playset Husky dog/motorcycle & Drake who I have to get yet.
Re: Transformers: Rescue Bots Brushfire Found at UK Retail (1883620)
Posted by william-james88 on May 23rd, 2017 @ 1:03pm CDT
Probably one of the coolest Transformers: Rescue Bots toys has finally been found at retail. Rescue Bots Knight Watch Bumblebee turns from 3 dragons into Bumblebee wielding both a knight's shield and a staff made of the two other dragons. It has been found all across Canada at different toysrus location with this specific sighting below coming from Montreal, Quebec. The toy is selling for around $37.00 CDN. We can also see it in packaging with images of the back of the box, enjoy!

If you find this item or other Transformers toys, be sure to make a note of it in our sightings section to help out the community. 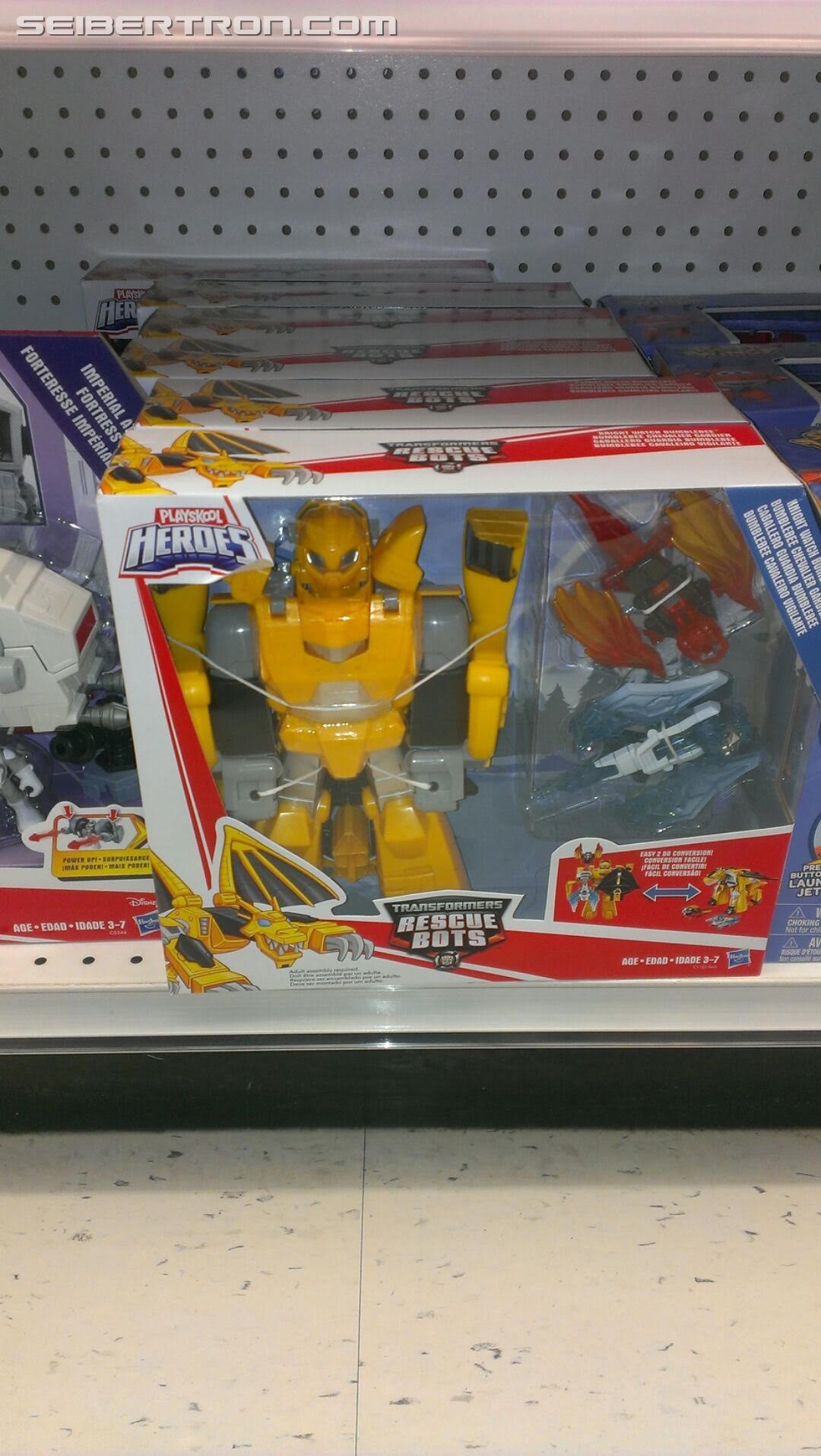 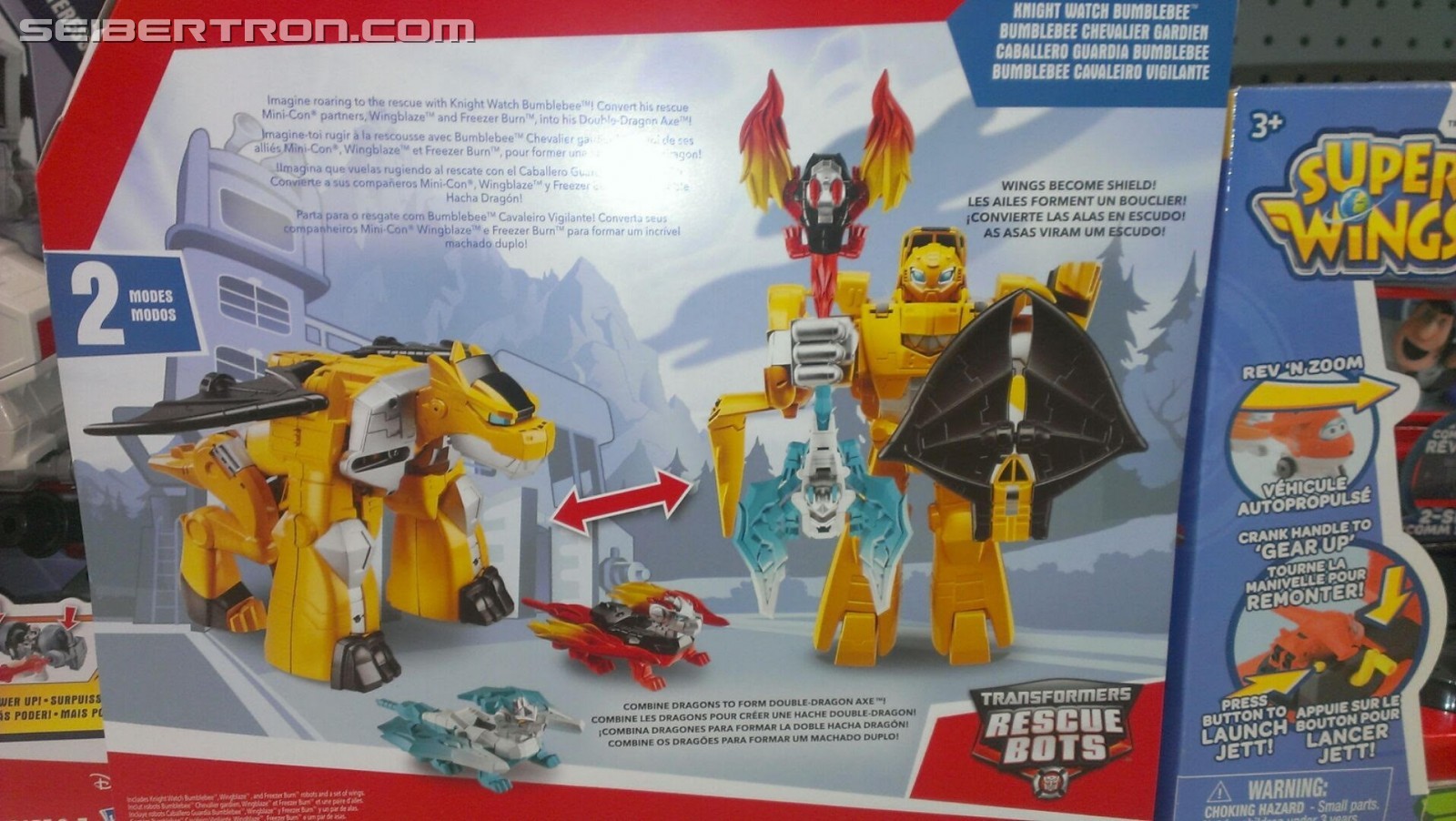