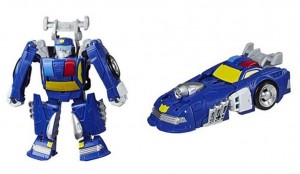 Coming right along with news of MP-49 Black Convoy being listed at BigBadToyStore, we have a new listing for the younger fans of the franchise, in the form of case assortment for Wave 3 of the Rescue Bots Rescan series, due in January. What's interesting about this listing is that two characters, Medix and Chase, have new molds. In this listing from site sponsor Entertainment Earth, we can see that Chase has the new altmode of a drag racer car, and Medix is now an offroad vehicle. Click on any of the iamges to be taken to the listing 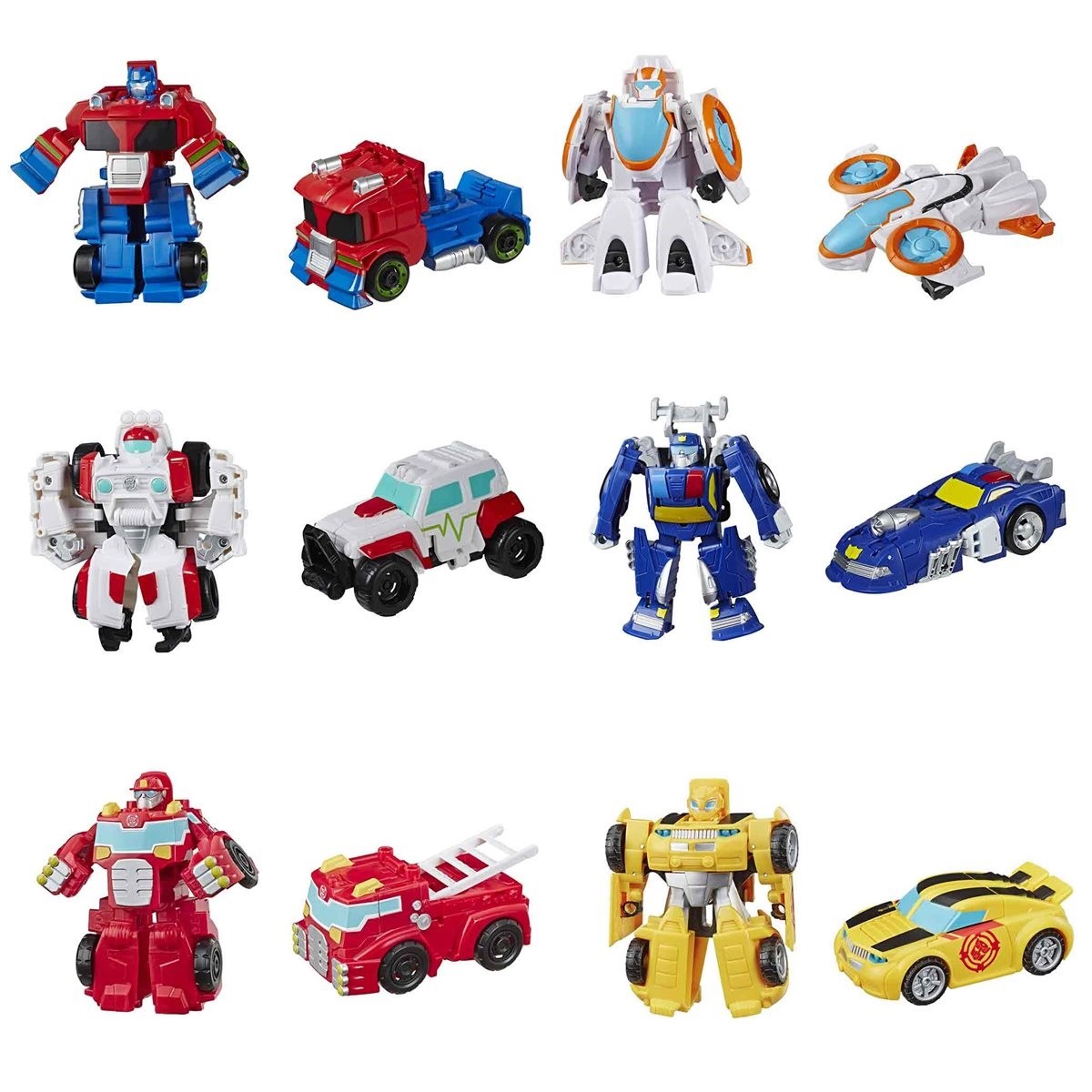 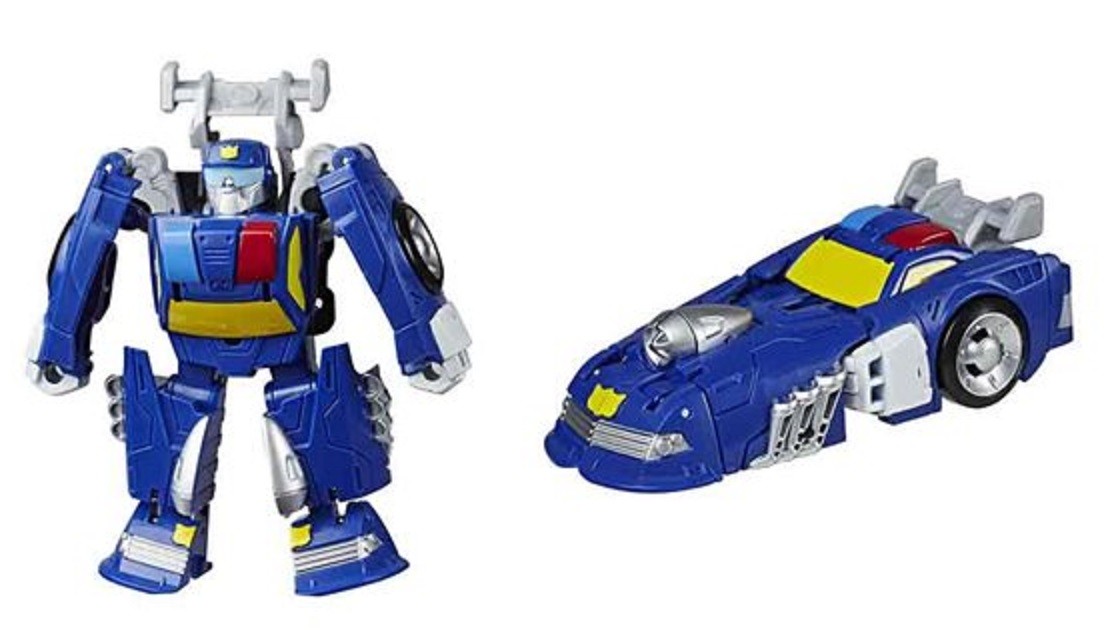 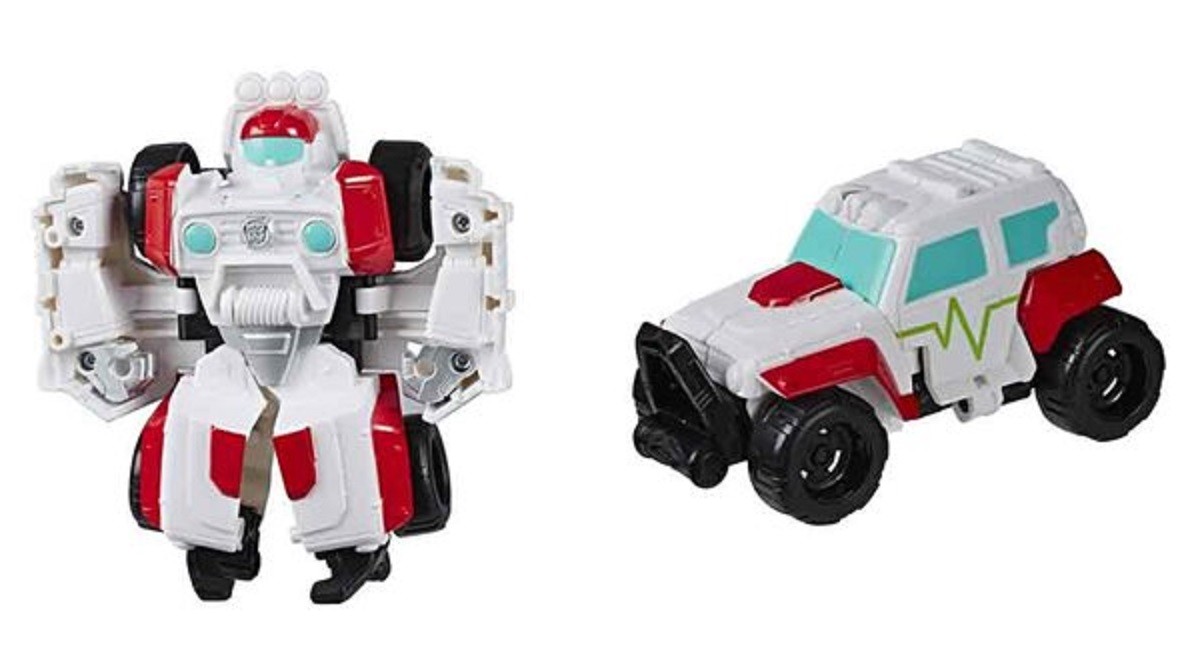 The listing states that these will be available in January, so maybe these new figures will be a late Holiday gift for someone on your list? Let us know what you think!

Edit: no. I'm not done. Seriously, ater Siege3, I want this creative team. They arent afraid to take risks, or pull a slip out of a hat and say "Okay, now who could we turn into THIS vehicle? To hell with what they were, let' s go with what they WILL BE. It doesnt have to be bonkers, but I want Classics back, whem it was all NEO G1. /soapbox
Re: Transformers: Rescue Bots New Molds Revealed (2045821)
Posted by D-Maximal_Primal on December 2nd, 2019 @ 7:48pm CST

Flashwave wrote:Is it me or has Rescue Bots gotten all the cool alt modes Generations is afraid of? I mean, a friggin' Funny Car? I want a dragster Funny Car. Give me Blurr as that. The Quinjet. Uou know who would work as a Quinjet. a Tomahawk Motorcycle? Meanwhile all we get is G1 with knees.

Edit: no. I'm not done. Seriously, ater Siege3, I want this creative team. They arent afraid to take risks, or pull a slip out of a hat and say "Okay, now who could we turn into THIS vehicle? To hell with what they were, let' s go with what they WILL BE. It doesnt have to be bonkers, but I want Classics back, whem it was all NEO G1. /soapbox

I agree with this.

Generations needs to embrace some of the wacky that Rescue bots has given us
Re: Transformers: Rescue Bots New Molds Revealed (2051736)
Posted by Stargrave on February 8th, 2020 @ 10:56pm CST
2019 wasn't a bad year for Hot Shot. Aside from his Generations Selects Transformers: Cybertron exclusive version he saw several of his Rescue Bots Academy likeness released. Thanks to a head's up fro our own ScottyP we've learned the latest Transformers Rescue Bots Academy Hot Shot has popped up on the Hasbro website. This is the larger sized assortment that sells for $14.99, with this particular toy looking similar to the Hot Shot previously found in the recent Academy Rescue Team 4-pack (just larger and with some slight difference in deco). From the website description:

"Selected to become a Rescue Bots Academy trainee by none other than Optimus Prime himself, Hot Shot is the hero of the team!

Little heroes ages 3 and up can imagine going on daring mission with one of their favorite Transformers Rescue Bots Academy characters! Designed with Easy 2 Do conversion and sized right for small hands, the Hot Shot toy converts from robot mode to vehicle mode and back again in 1 simple step! In bot mode, the Hot Shot figure features a fun, button-activated “Splash Blaster” rescue tool, inspired by the one featured in the animated series. Boys and girls will love pretending to race to the rescue with this 6-inch collectible Transformers toy robot!

Manufactured under license from TOMY Company, Ltd.
Transformers Rescue Bots is a trademark and copyright of Hasbro.

• 2-IN-1 RESCUE BOTS ACADEMY TOY: Little heroes can enjoy twice the fun with 2 modes of play, converting this Hot Shot action figure from an off-road vehicle to a robot and back again
• AS SEEN IN THE TRANSFORMERS RESCUE BOTS ACADEMY TV SERIES: Kids can imagine racing to the rescue with this Hot Shot toy, inspired by the Transformers Rescue Bots Academy show
• EASY TO DO: Designed with Easy 2 Do conversion preschoolers can do, this figure makes a great gift. With 1 easy step, kids ages 3 and up can convert this Rescue Bots Academy toy from robot to vehicle
• RESCUE TOOL: The fun and oversized Hot Shot converting toy robot features a fun, button-activated rescue tool, as seen in the Transformers Rescue Bots Academy animated series
• COLLECTIBLE TOYS: Look for other Playskool Heroes Transformer Rescue Bots Academy toys to assemble a rescue team (Other figures each sold separately. Subject to availability.)
• Figure scale: 6 inches

• Ages 3 and up
• WARNING: CHOKING HAZARD– Small parts may be generated. Not for children under 3 years."

Will you be picking up this Hot Shot for the junior collectors in your Ark? As always share your thoughts in the forum and be sure to stay tuned to Seibertron for the ultimate in Transformers news! 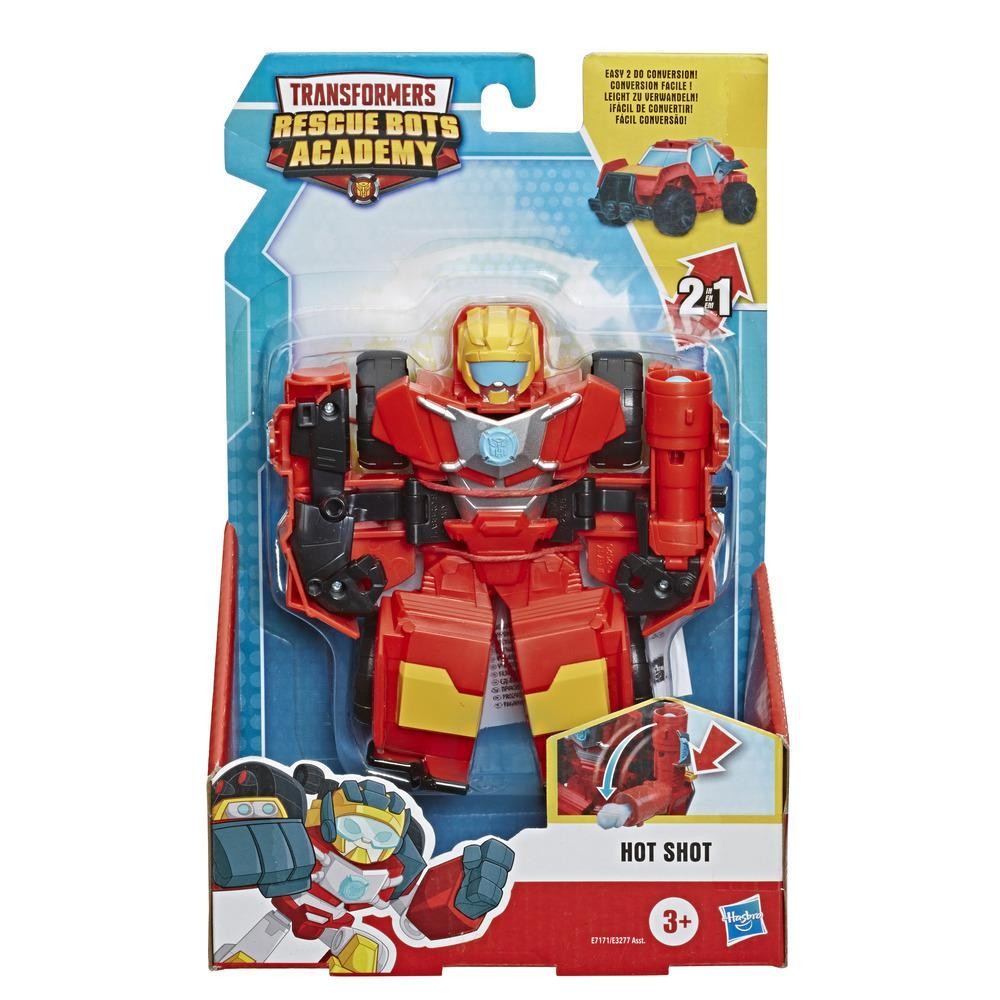 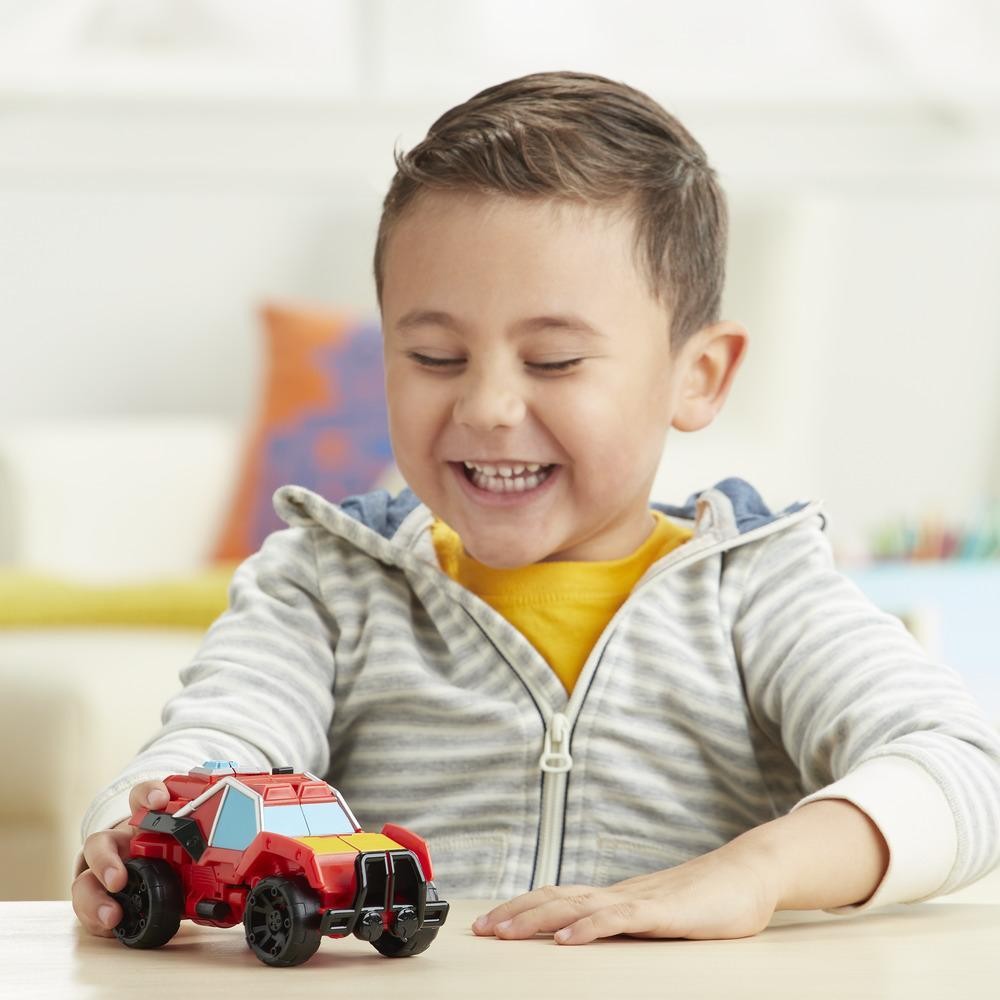 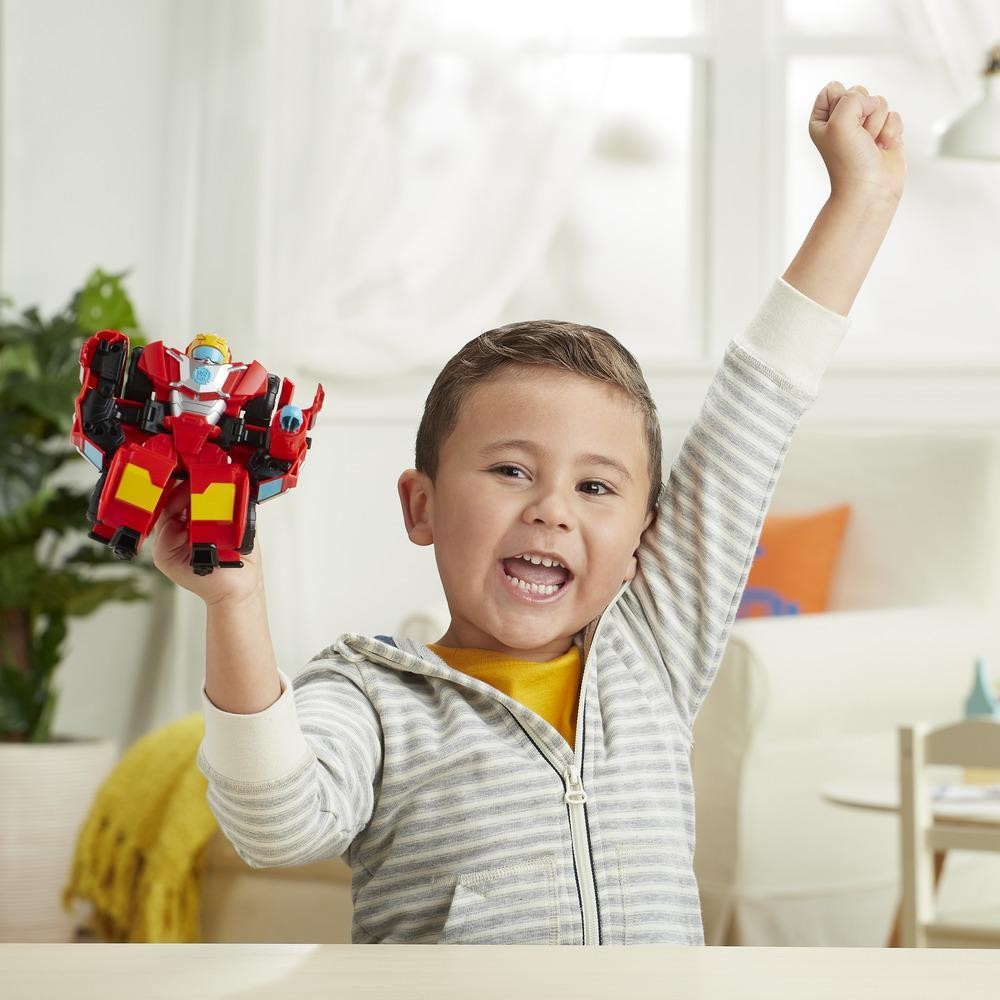 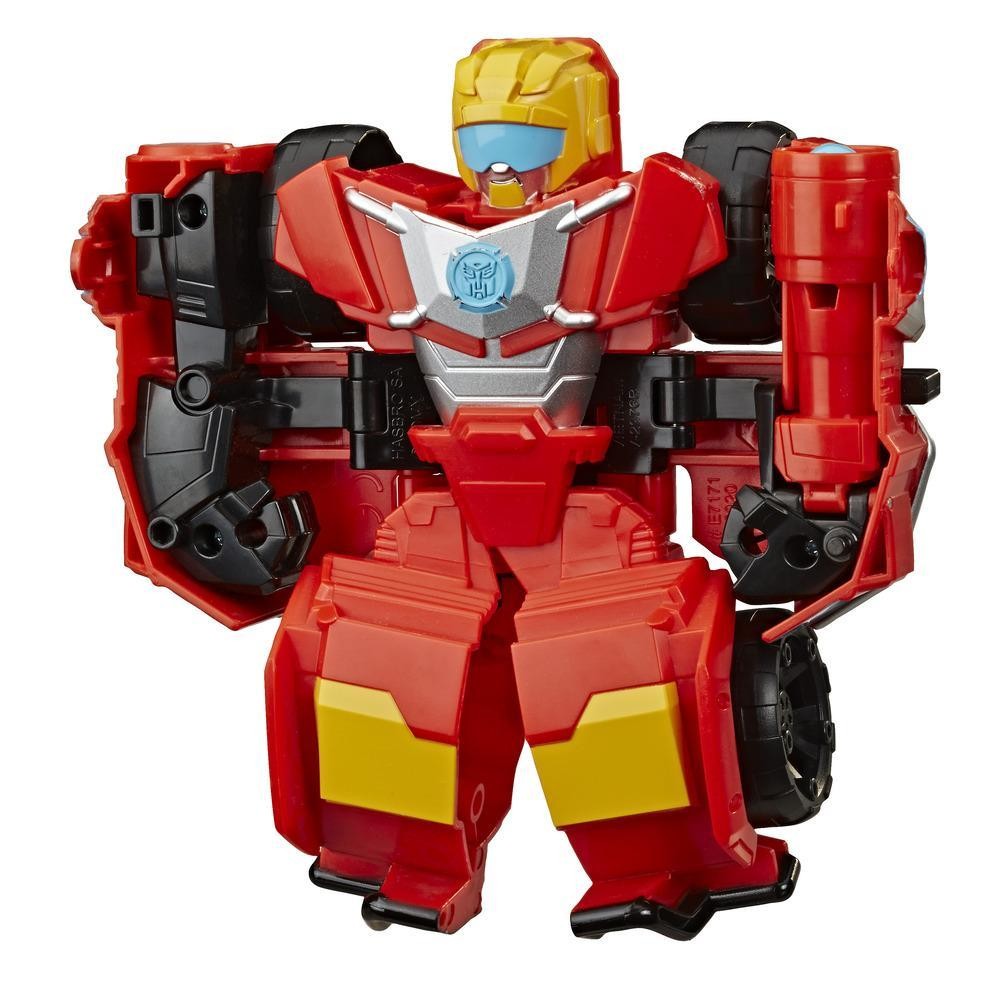 Bounti76 wrote:And now, something intended for the younger Transformers fans. Via online listings from Smyth's Toys, in the U.K., we have two new playsets of Rescue Bots Wedge, and Hoist. While the two individual toys look to be different molds, the "Command Center" parts of these playsets seem to be simple remolds of each other. They also share a light up feature in the crane arm of each Command Center. 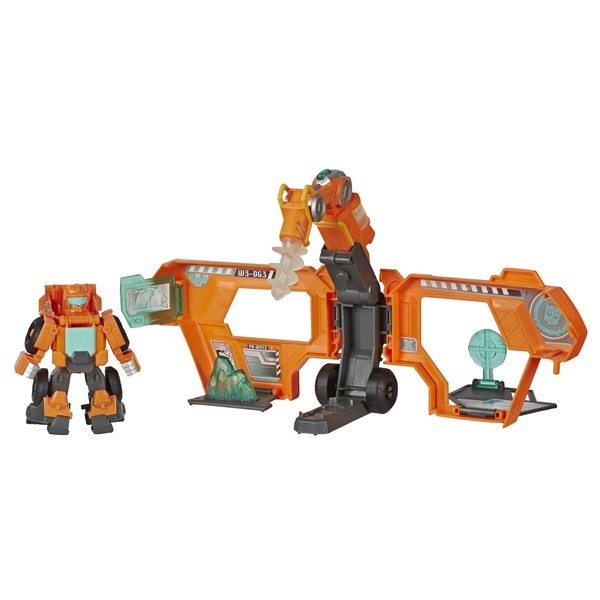 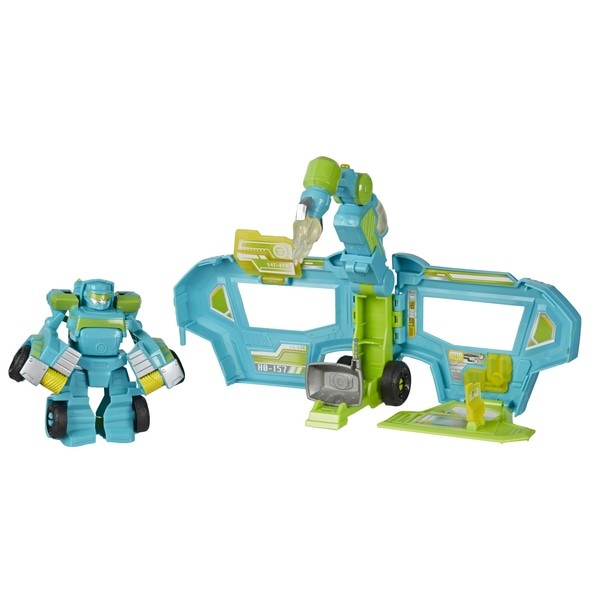 There's no word on when these sets will be available in the U.S. (a quick search of Amazon didn't show any listings for these), but keep your eyes peeled if you're a fan of this line. And as always stay tuned to Seibertron for the latest in Transformers news!

I look forward to these being single-packed without the trailer (per Heatwave, Chase).