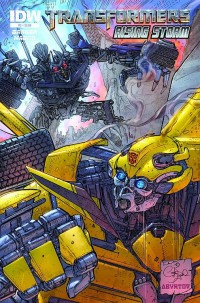 Transformers: Dark Of The Moon will be hyped up by IDW in the movie prequel, Transformers: Rising Storm. The first issue's cover featured an outline of a new Decepticon that would be making an appearance in the film. Now the second issue features a battle between a fan-favorite Autobot and his long time nemesis. We never got to see the cover from the March 2011 Solicitations, but thanks to Archonia we finally do. Take a look at the cover and the description below!

MEGATRON's deadliest plan yet kicks into high gear-it's all-out war! Plus-BUMBLEBEE squares off against BARRICADE for what may prove to be the final time, while OPTIMUS PRIME calls in every AUTOBOT on Earth to put an end to STARSCREAM! The stakes rise in this intense prequel to Transformers 3!