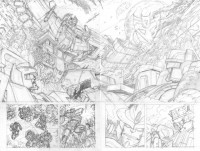 Courtesy of the official Transformers Facebook page, we have this month's Transformers: Robots in Disguise issue 15 commentary! Read below for the full deal with Andrew Griffith, featuring his own pencil art for the issue.

TRANSFORMERS: ROBOTS IN DISGUISE #15 hits the stands today, courtesy of IDW Publishing and Hasbro! Bumblebee and his provisional government have had to face a lot over the past year… but they never imagined they’d have to fight an angry Devastator with Prowl as its head! In honor of this action-packed issue, we sat down with artist Andrew Griffith to take a look at his original pencil art! The comic, by Griffith and writer John Barber is available at comic book stores everywhere and at https://transformers.comixology.com/ or via the Comixology and iBooks apps on your computer or mobile device!

PAGE 1- We’re inside the Autobot Med-Center as the action goes on outside—there’s quite a few different ’bots in here, all—of course—with different designs. Did you spend a lot of times on this page, making sure everyone was correct and adding the various states of damage? ANDREW GRIFFITH: Well, since I only pencilled this, I had to leave a lot of that up to the inker [Brian Shearer]. Maybe it’s just me, but I find I can only put so much detail in with pencil before it becomes a smudgy mess. But I did make sure to let Brian and [colorist] Josh [Perez] know who the guys were, that were intended to be specific characters.

PAGES 2 and 3: When designing Devastator, did you have any kind of specific brief to follow, other than including Prowl as a vital component? And were you given much freedom in the design? ANDREW GRIFFITH: Yes, there were definitely specific aspects of his design to keep in mind, some of which I shouldn’t even hint at so as not to ruin anything about issue 16. I had a good bit of freedom in his design. The toughest part was the fact that John wanted Prowl to be the head and part of the torso, so I wouldn’t be able to just use Prowl as a leg in place of the deceased Scrapper. And I wanted to keep some of what Guido [Guidi] designed for ALL HAIL MEGATRON, so hopefully there was some of that look still there. I did have to add the purple chest shield back in though, because if I would have left it off like Guido did, Prowl’s integration into Long Haul’s section just didn’t look very good.

PAGE 4: The Autobots fight Devastator, which doesn’t seem to go well. When doing the drawings, do you take a much of a vested interest in the characters, knowing what might happen further down the line, and maybe not denting up the ones you like better as much as others? ANDREW GRIFFITH: Doesn’t go well for the Autobots, you mean? Seems to go pretty well for Devastator, though. Well, the way John likes things to go, everyone ends up pretty well beat-up and dented. But sometimes damage to a particular character has to be kept in mind very specifically, such as Metalhawk’s gutshot wound, or Bumblebee’s crumpled face. The best stories are character driven as far as I’m concerned, and the characters are what draw me most to Transformers, so I think it’s safe to say I take a lot of stock in how the designs and wear and tear reflect on specific characters. There’s some battle damage that’s appeared in recent issues that even provides a bit of foreshadowing, if you know where to look.

PAGE 5: Megatron watches as the destruction on Cybertron continues. Again, with Megatron in his new body, why did you make the choices you did in this design? Were there many different versions before settling on what we see here? ANDREW GRIFFITH: Not really, this was the only real design that I came up with. The idea was to make a Megatron that was indicative of both his original G1 look and his pre-Earth comics design, as seen in STORMBRINGER. Sort of your quintessential Megatron. So… hopefully, I pulled it off. I hope to get the design I did for him out somewhere in the near future, as well as some of my designs for Devastator and how Prowl’s section fits in.

) but I've notice that when it shifts to the plot instead of the characters it all falls apart. I've come to the sad conclusion that this plot just isn't very strong. there's simply not enough in the issues. Not even a small resolution to tide us over. There doesn't even seem to be any subplots either. it's just so bare.

My other gripe is the villan aspect. Megatron has been reduced to a saturday morning villain. Which is sad because Robert and Roche showed me just how dangerous and smart he can be. When reading this I just don't have the confidence he even has an idea of what he wants anymore. Sure, he has all the big guns and evil sith powers, but what else? I just fail to see the danger he presents anymore, may as well throw him with Spike. I like Megs about as much as him these days.