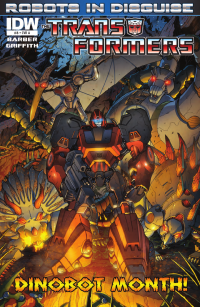 Dinobot Month continues! Our friends at IDW Publishing have provided us with the preview for Transformers: Robots in Disguise Ongoing #8. Enjoy!

Transformers: Robots in Disguise Ongoing #8
John Barber (w) • Andrew Griffith (a) • Griffith, Casey Coller (c)
DINOBOT MONTH! Guess who's back on Cybertron? SLAG, SLUDGE, SNARL, and SWOOP—and they’re as mad as ever! IRONHIDE leads them deep into the Cybertronian wilderness searching for lost AUTOBOTS... but what they find might be the greatest danger of all!
FC • 32 pages • $3.99

Sodan-1 wrote:Gotta say, I don't like the designs of the Dinobots. They're too organic and mono-colour.

Sodan-1 wrote:Gotta say, I don't like the designs of the Dinobots. They're too organic and mono-colour.

That's the way they've been since Spotlight #1.

Thank you for pointing that out to me.

If I didn't like the designs then I'm unlikely to find them favourable now.
Re: Transformers: Robots in Disguise Ongoing #8 Preview (1408379)
Posted by El Duque on August 8th, 2012 @ 6:32pm CDT
The official Transformers facebook page has posted the creator commentary for Transformers: Robots in Disguise Ongoing #8. Artist Andrew Griffith and writer John Barber give us their thoughts on the first five pages. Mirrored below for those without facebook access.

PAGE 1- Ironhide is setting out the mission for this issue. It seems like Ironhide is changing as a character as much as Cybertron itself continues to evolve.

JOHN BARBER: Yeah, he’s evolving as he tries to make sense of the vision of the future that he had in “Chaos.” I wanted to make that something that really impacts the character. He’s still the old battle-ready roughneck, but he’s seen something that’s really changed his perception of the universe. And yeah, it’s continually changing—his ideas about what he saw—and we’re also seeing more aspects of what he know, and what he thinks.

ANDREW GRIFFITH: I was surprised you didn't ask about the obvious visual reference to the movie Patton, which I give full credit for to John. I think John's shown a real good handle on Ironhide's character, which is something worthy of note considering he's a battle-hardened and weary warrior who's been killed, resurrected and presented with a vision of where he ends up billions of years in the future. Whether or not what he saw is real or a dream, that's gotta leave a mark on a guy. And it's been fun to see old Ironhide explore his metaphysical side.

PAGES 2 and 3- The Dinobots are revealed along with Sky Lynx. As a team they appear to be a natural fit. What made you want to bring them back now and Sky Lynx, what draws you to him as a character.

JOHN BARBER: I love the Dinobots—I’ve never made any bones about that! (Er, get it? Bones? Dinosaurs? Sorry.) The thing that drew me to Sky Lynx is about 100 billion emails and phone calls from Andrew asking when he’d play a big role. What works here is that Lynx has such a different personality than the Dinobots. I mean, going back to his original G1 personality—we haven’t really seen him much in the IDW comics. I think he’s such an odd Transformer… people get drawn to him because he wasn’t a car or a jet that changes into a humanoid robot-mode… he’s a bird, he’s a cat, he’s a space shuttle, and he’s an odd combination of all those. I’d actually tried to get Mirage in this issue, too, after Andrew suggested it, but he didn’t really work. The story was better without him. No offence, because he’s a great character that I’d like to see more of—he just wasn’t playing out in the story the way he needed to.

ANDREW GRIFFITH- Did I lobby for Sky Lynx to play a bigger part? Really? Ok, OK. Yeah, it's coming back to me now. What can I say, I always enjoyed his toy and thought of all of the characters that have yet to make much of a mark on IDW's comics that he's one with a lot of room for exploration of his character. And yeah, when you see the Dinobots and Sky Lynx together, it does just somehow feel natural, doesn't it?

PAGE 4- Bumblebee reflects, quickly, on how far they’ve come since everyone returned to Cybertron. Has anything changed in the way the characters are reacting so far from how it was initially imagined?

JOHN BARBER: Sure—some characters have asserted themselves in different ways than I would have anticipated, but in the main, the idea here is that normal life now is so different than it has been for the past four million years. Even these quiet moments are full of frustrations and… is it hope? Is it impending doom?

ANDREW GRIFFITH: I'm actually impressed with how closely things are playing out compared to what John had originally discussed when I came onboard, in terms of the overall ideas and story arc. But of course as things have evolved and new ideas have come along, I think they story has only improved. Of course when you see the finished product in retrospect, I think it can affect how things go in the future. A specific character in the background might inspire John to write that character in to a scene later and add some depth to their initial appearance, for example. I can't say if that specifically has happened, but sometimes John has gone back and expanded on things I drew in of my own volition. It's great being able to contribute to the storytelling in that way.

PAGE 5- The prospect of new elections is looming, something which is being reflected across some nations on our own planet today. Have these events influenced the progress and possible outcome of this story thread?

JOHN BARBER: Not really specifically. I mean, this isn’t an analogue to any specific instance. It’s really about the idea of building a nation. The same problems occur over and over in history. It’s more about the exploration of the idea, not about any one place. Of course free elections are the right thing to do, but without the framework of a solid, stable government, they can make things worse, is the hard, terrible reality that Bee’s dealing with.

ANDREW GRIFFITH: As I've been drawing this series, I've looked to places like Deadwood or Rome (The TV series) for how a fairly primitive and unsettled city might be convincingly be portrayed, but I haven't really tried to allude to any specific contemporary political situation.

The fact that he referenced Deadwood gives him +1 in my books.