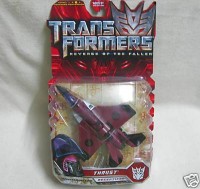 We've received the heads up that there is currently an auction for a Transformers Revenge of The Fallen deluxe class Thrust on ebay. Yes this figure is not a repaint of the Movie 1 Voyager class Starscream mold like the rest of the G1 colored seeker homages but of deluxe class ROTF Breakaway.

UltraPrimal wrote:I thought they were making a new mold for Thrust. Or am I thinking of Dirge?

Breakaway doesn't have much kibble in jet mode, and his robot mode is pretty sweet. The only things I don't like about it are the color scheme and the big, round, googly eyes. Thrust fixes both of these problems, plus he's a decepticon, which is always a plus for me.
Re: Transformers ROTF Thrust (941447)
Posted by skywarp-2 on June 24th, 2009 @ 6:30am CDT
well it certainly sounds as if this Thrust is going to be a fan fav... nice touch with the different head sculpt..don't know if that is a fluke or if hasbro management has decided new noggins are a good fan and customer relations idea... it will remain to be seen if they carry on with this approach in other repaints in the future..

It sure would be nice to keep getting new head sculpts for repaints All the time, Hasbro...

I wonder if Dirge is following up.

Still, I'll probably pick up this and the new Dirge mold.
Re: Transformers ROTF Thrust (941480)
Posted by GuyIncognito on June 24th, 2009 @ 7:51am CDT
Sweeeet! I love this mold, and I was hoping there would be some repaints of it! That's a must-buy for me.
Re: Transformers ROTF Thrust (941491)
Posted by Covenant on June 24th, 2009 @ 8:07am CDT
This one's a pass for me, I don't think its a good choice of robot mode for one of the individuals of the secondary seekers group.