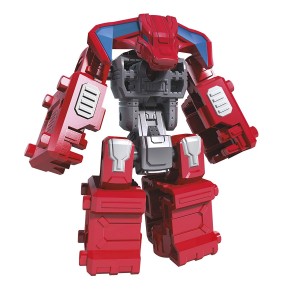 Thanks to fellow Seibertronian and toy reviewer Chuckdawg1999 we have a brand new video review featuring Wave 3 Battle Masters Smashdown and Caliburst! While Caliburst is a straight recolor of Blowpipe (though with a new blast effect), Smashdown is a brand-new mold, transforming from a Minotaur-ish robot into a hammer that can be wielded by Deluxe and larger sized figures- indeed, fellow Wave 3 Deluxes Reflector Refraktor and Red Alert have cameos.

The Battlemasters are one of the hidden gems of the Siege line. Caliburst continues the update to the traditional Targetmaster look with a nicely articulated figure and blast effect. Smashdown is an all-new mold that transforms into a rather cool war hammer with an equally cool and useful impact effect. Both are highly recommended to fill out your Siege ranks.


Check out this latest review and then let us know what you think below. Will you be picking up this latest Wave from the Siege line? Wave 3 is slowly trickling out to stores, and these two should be available sometime in July.