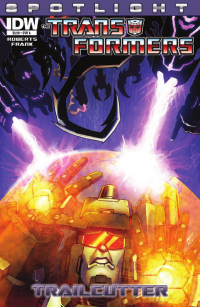 Thanks to our friends at IDW publishing we have the preview for Transformers Spotlight: Trailcutter. Enjoy the preview found below, and be sure to download or pick-up a copy on Wednesday. Full review coming later today.

Transformers Spotlight: Trailcutter #1
James Roberts (w) • Matt Frank (a) • Frank, Livio Ramondelli (c)
STEALTH ATTACK! Trailcutter has a problem: the Lost Light has been taken over by the Decepticons—and no one else seems to have noticed! Can the Autobots’ defense strategist singlehandedly see off an army of infiltrators? And even if he does, will it convince his crew mates that he's got more to offer than kind words and forcefields?
*2 regular covers will be shipped in a 1-to-1 ratio

Bullet points:
An all-new tale set in the midst of the ongoing More Than Meets the Eye series, written by MTMTE’s James Roberts!
Art by Mars Attacks Transformers’ Matt Frank!
The Spotlights build toward the biggest event in Transformers comic history… coming in 2013!

. I didn't think I could love whirl more but I was wrong. He is my ALL time fave tf now. no contest. I also love the art. Milne is amazing, but the expression and drawing in this issue are even better than his. I cannot wait for this now. I want this as badly as the new issue of MTMTE. I need it.
Re: Transformers Spotlight: Trailcutter Preview (1475788)
Posted by Sodan-1 on April 2nd, 2013 @ 11:31am CDT
Utter bastards! They've justified the name change.

Whirl is seriously awesome. Such a dick.

Synopsis
STEALTH ATTACK! Trailcutter has a problem: the Lost Light has been taken over by the Decepticons—and no one else seems to have noticed! Can the Autobots’ defense strategist singlehandedly see off an army of infiltrators? And even if he does, will it convince his crew mates that he's got more to offer than kind words and forcefields?

Spotlight: Trailcutter takes place between the events of More Than Meets the Eye 5 and 6 (the Delphi happenings and Fort Max's breakdown-Rung's beheading, respectively). So why haven't we seen any of the events from this issue before?

Ok, so everything else was happening at the time, but surely a massive hull breach and a Decepticon invasion wouldn't go that unnoticed, surely. That is the only negative point though. This Spotlight is a lot more successful than its predecessors in weaving in the Metrotitans plot, whilst still having its own private story.

Plus, it's Roberts. It's funny, there's good dialogue, Whirl's excellent, there's good humour, Whirl is brilliant. There's an in-story explanation for the change of name for the protagonist, the Insecticons (the coloured ones, not the purple ninjas) show up again, there's a lot of references, plus the return of one of my favourite, spikier kind of Decepticons – you'll be hooked, alright. Did I say Whirl is also pretty good? I think I did.

In addition, it's a nice refresher after the last MTMTE issue, where tragedy struck. It's good to see Rewind and Chromedome both happy and Ultra Magnus kind of around, and the general atmosphere a lot lighter, even during the Decepticon incursion.

The artist is Matt Frank, another new entry to the Transformers series and a welcome one at that. The style is fairly “cartoonish”, so if you're not a fan of Roche or Griffith, this one is probably not for you. There is a lot of lip biting, face pulling, jaw clenching and Whirl doing impressions. And a lot of cameos!

Again, just hanging in the background

Lee's on lettering, and I don't really have much to say about it. That's not to say it's not good, it's just not as popping as the newcomers on the other titles – although some of the sound-words are excellent. Thomas Deer on colour duty. Now this, this one's good. There is some Burcham reminiscence in here, with the lighter, “grainier” colours. And they really shine (though not literally, except for the shiny shiny medals) during Trailcutter's solo adventure.

Why so blue, guys?

There is a sense of the comic that can be compared to Nick Roche's work, but as Nick is a one-man-band (including the audience) I think Frank's artwork really suits Roberts' writing style. So yes, good combination for this Spotlight!

The story does not take itself too seriously, and it's a nice break from the emotional suckerpunch that was issue 15 (especially now that we've been told that 16 is even worse). Focusing on a somewhat minor character worked out well, and I hope this will work well for the next one, too!

And team awesome is awesome

Overall a good, entertaining issue. Easily up with Nick Roche's Spotlight: Megatron, and maybe even better. It's nice to see a relatively new artist and colourist working on a title, and successful ones at that. The story works well, except for its time placement (but that may be just me), and it hints nicely at what's to come – Hoist and ...purple reign? A good read, not perfect, but perfectly enjoyable!


TRANSFORMERS SPOTLIGHT: TRAILCUTTER breaks into comic book stores and digital platforms,thanks to IDW Publishing and Hasbro! Written by TRANSFORMERS: MORE THAN MEETS THE EYE scribe James Roberts—and set firmly in that series’ timeline—SPOTLIGHT:TRAILCUTTER delves into the world of an oft-overlooked TRANSFORMERS character… and lays the groundwork for this fall's big TRANSFORMERS event. We sat down with artist Matt Frank to talk about the issue—available today at comic book stores everywhere, and at https://transformers.comixology.com/ or via the Comixology and iBooks apps on your computer or mobile device!

MATTFRANK: 2012 was a pretty incredible year. No continental shifts or exploding suns, so we’re ahead of the game! I’ve been lucky to have a near-constant flow of work with TRANSFORMERS and other projects.


Q: Tell us a bit about yourself. How you got into drawing, were you a comic book fan, who has influenced you in your career.

MATTFRANK: As a kid, drawing seemed to be a natural result of the sort of stuff I was a fan of. Dinosaurs and monsters and robots and all kinds of goodness. I just wanted to recreate the stuff that gave me so much excitement.I’m definitely a pretty big comic fan, although my interests are kind of all over the place (though many still chart a course through the same thematicelements). I’m a big fan of guys like William Stout, Art Adams, Ricardo Delgado (Age of Reptiles!), Dan Brereton, and more recently I’ve discovered the glory of books like Blacksad and Scott Pilgrim. Of course, I’ve always loved the TRANSFORMERS comics, be they G2, Dreamwave or IDW!


Q: Were you a fan of Transformers right from the very beginning?

MATTFRANK: Depends on what “very beginning” is...I’m a ’90s kid, so I wasn’t there for the G1 boom. Eventually I got a hold of TRANSFORMERS: THE ULTIMATE GUIDE by Simon Furman, and that definitely opened up a few more doors!


Q: Having done work on MARS ATTACKS THE TRANSFORMERS recently, how did it feel to come back and work with James Roberts in the MORE THAN MEETS THE EYE world on SPOTLIGHT:TRAILCUTTER?

MATTFRANK: Ironically, I made the TRAILCUTTER comic several months BEFORE the crossover! So it actually provided a nice warm-up for when I had to tackle MARS ATTACKS THE TRANSFORMERS in an even SHORTER time frame! But I'm a big fan of James’s work, and it was a real thrill to compliment our respective comedic styles for this book.


Q: Did you have to do much research and catch up with events/characters designs before drawing SPOTLIGHT:TAILCUTTER?

MATT FRANK: My existing issues of MTMTE were scattered around my studio and workspace, each opened to a particular page that proved useful, especially for Trailcutter’s relatively short exposure up to this point. Beyond that, I was pretty familiar with the lore... although I actually got to DESIGN Killmaster, which was wonderful.


Q: Spotlight Tailcutter is part ofthe recent wave of SPOTLIGHTs. How’d you feel knowing that this comic is going to be packaged with a toy, and could be someone’s first ever TRANSFORMERS, or any, comic book?

MATTFRANK: One of the first TRANSFORMERS projects I ever tackled was the pack-in comic, “The Rise of Safeguard,” sold alongside Jetfire and Jetstorm from TRANSFORMERS: ANIMATED. So the feeling is a familiar one!


Q: What advice would you give to someone if they were drawing TRANSFORMERS for the first time?

MATTFRANK: It would definitely be to find your own style... or at least put your unique stamp on the characters you draw. There are so many amazing TRANSFORMERS artists out there, try and make yourself stand out!


Q: What tools of the trade do you use whendrawing the characters? Do you do lots of research before hand?

MATTFRANK: Besides good ol’ pens and paper, I have a ton of reference material, which I cannot stress enough. THE COMPLETE ARK is a godsend (or a [Transformers writer and letterer Chris] Mowry-send!) and I have quite a few of the IDW trades. Beyond that there’s definitely the internet. My own TF collection is somewhat limited (gotta make room for all my Godzilla toys, after all), but they’ll provide good reference in a pinch!


Q: Autobot or Decepticon? Who gets your allegiance?

MATTFRANK: “Me Grimlock no Autobot... Me DINOBOT.” (rips off Con’s arm).


Q: As we head deeper into 2013, whatare your aims for this coming year? Any burning ambitions you would like toturn into reality?
MATTFRANK: I’ve got a few other very exciting TRANSFORMERS projects coming down the pipe. I’m also doing even more Godzilla stuff... and then perhaps a little creator-owned goodness? Maybe something original to spice things up? Stay tuned, kids!