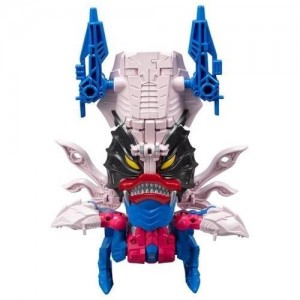 And then there was one! Thanks to regular reviewer PrimeVsPrime, we have the next-to-last of the Generations Selects Seacons to be released, Tentakil! This figure had the same name in both markets, and retains his ambulatory squid-monster mold. This is a nearly new mold, being mostly new parts, and sharing a scant few parts with Power of the Primes Moonracer. PrimeVsPrime shows off his 5 modes and notes a minor potential QC issue.

Tentakil and his release-mate Overbite were released in Japan this past Saturday, so those who preordered him via most online stores should be getting him fairly shortly.

What do you think of this figure? Is he worth the price for you? Let us know what you think below!