Transformers: Tales of the Fallen #1 Preview 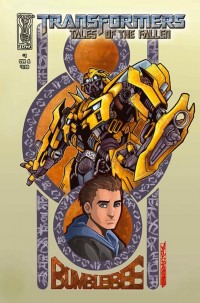 io9 gives us a look at an upcoming issue of Transformers: Tales of the Fallen #1, which kicks off the new series based on the Revenge of the Fallen film. As IDW describes;

An all-new miniseries set in the Movie universe launches here! Nearly two years after saving the planet, Sam Witwicky has grown up. It's too bad his friend Bumblebee hasn't. With their friendship strained, Sam sets out for an evening devoid of alien interference. Little does he know that he's being watched. Without his robotic protector, can he beat the Decepticons? 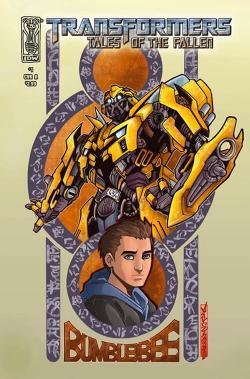 You can check out the 5-page preview, as well as the 3 different accompanying covers by Carlo Magno, Alex Milne and Photo, here. You can also check out the Vector Sigma Database for a look at Tales of the Fallen #2's description and one of it's covers.

Stay tuned to Seibertron.com for your latest news and updates!

Re: Transformers: Tales of the Fallen #1 Preview (972143)
Posted by dragons on August 12th, 2009 @ 9:16am CDT
trust me your not missing much if you cant read the small print i didnt mean like that you know what i mean anyway the way it starts out it looks more like the adventures of sam & bumblebee but its 5 page preview who knows but i do like how bumblebee flips over trents truck & hits the guy in the head with his door for tyring to hijack him.

but that red light scene just doesnt fit in the comic to me hes been on earth for how long sam shouldnt have to tell him bumblebee stop remeber you stop at red lights i dont need another ticket
Re: Transformers: Tales of the Fallen #1 Preview (972864)
Posted by MYoung23 on August 13th, 2009 @ 11:39am CDT
Was this series really necessary?