Transformers: Tales of The Fallen #4 Preview 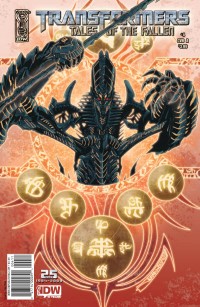 We get a Transformers Comic preview of the Revenge of the Fallen variety. BZZURKK gives us a snippet of Tales of the Fallen #4, featuring the past of the name sake of the series - The Fallen. Check out the description, covers by Milne and Magno, and a excerpt below.

Who is/was THE FALLEN? Why did he turn away from the fraternity of Primes to embrace all-conquering evil? The answers are revealed in this searing, mind-scouring trip to the very heart of darkness, as THE FALLEN rises, and, perhaps, entire universes fall!

The rest of the 5-page preview can be seen here. You can check out the Vector Sigma Database for a look at the rest of the Tales of the Fallen series.

Stay tuned to Seibertron.com for the latest Transformers news and updates!

And the artwork is pretty uninspired, I mean it's detailed and everything, but there appears to be no passion in it's execution, it just looks a bit lackluster.

It's not doing it for me. Sorry.