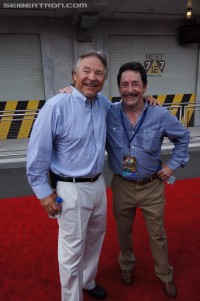 More coverage from the Grand Opening Event at Universal Orlando for Transformers: The Ride 3D! Seibertron was on hand at the Red Carpet event to capture all the action, which included a rare appearance by both Peter Cullen and Frank Welker, the iconic voices of Optimus Prime and Megatron! You don't get a lot of opportunities to catch them both at the same event. Click here to view the gallery of almost 900 images! 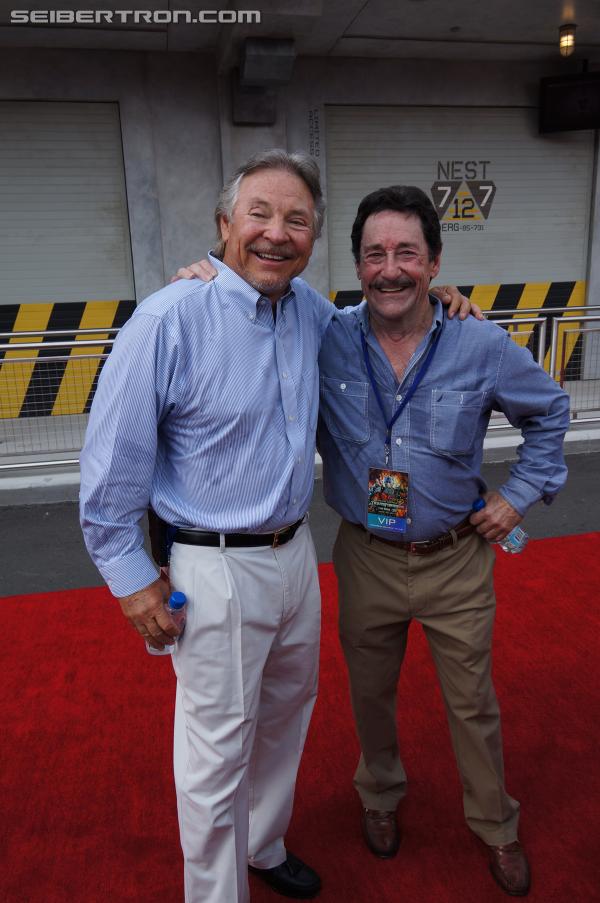 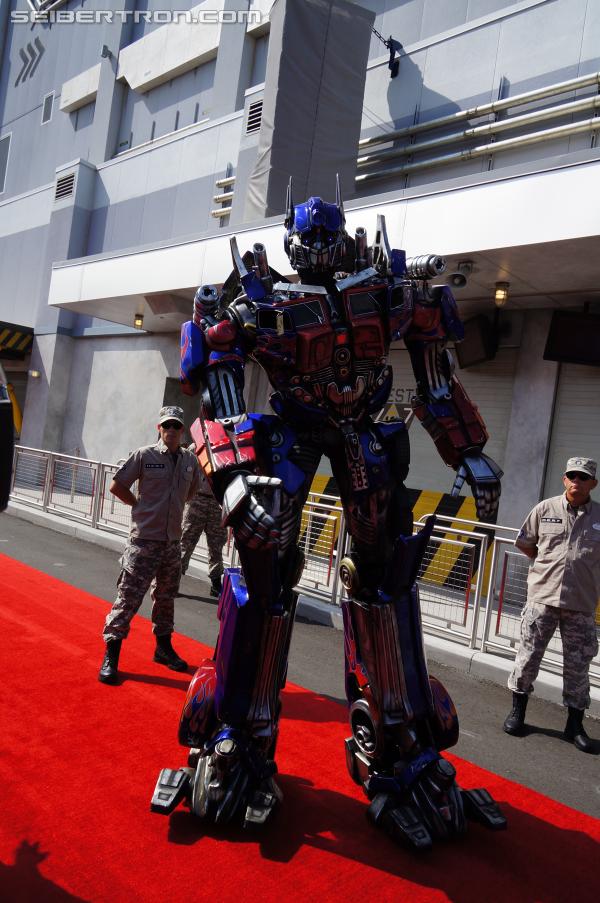 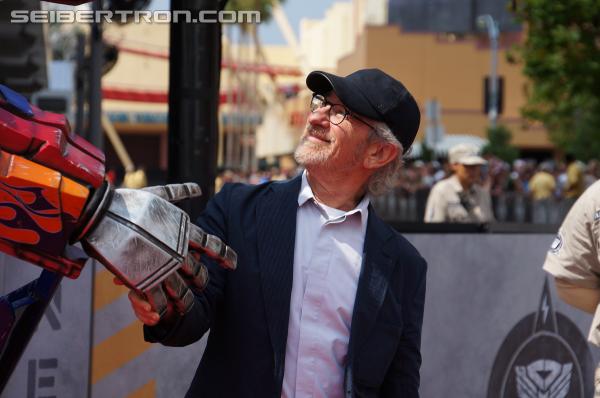 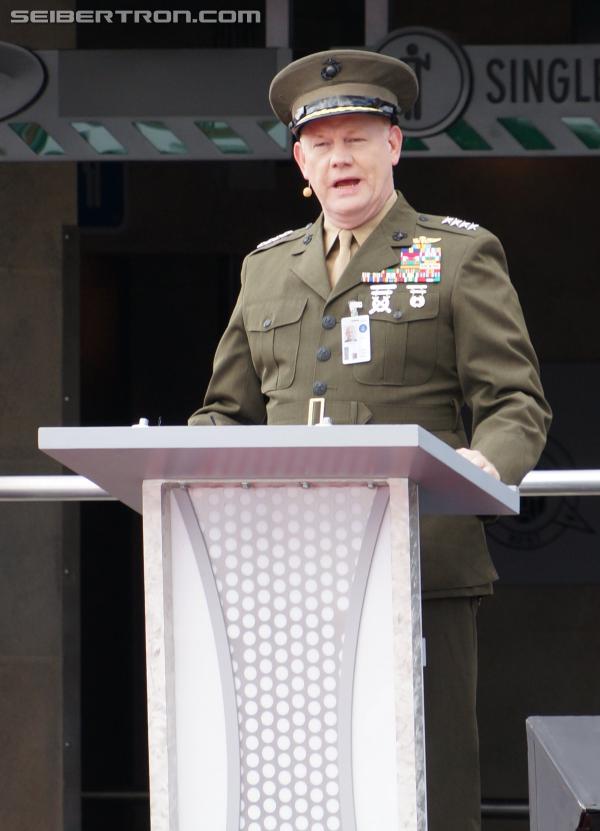 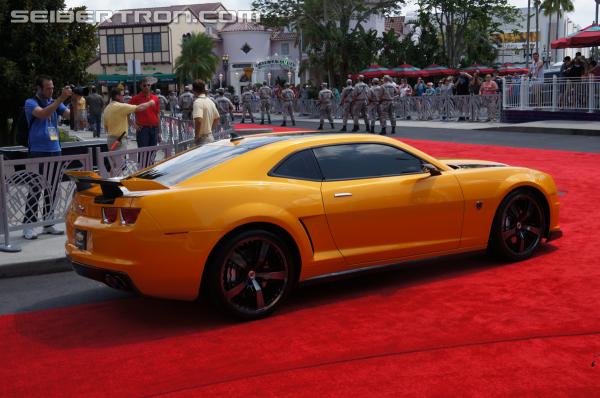 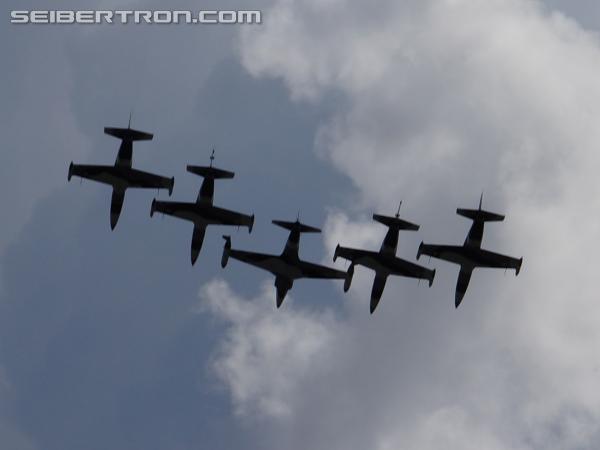 THE BATTLE TO SAVE EARTH BEGINS ... IN ORLANDO

Universal Orlando marks the grand opening of TRANSFORMERS: The Ride - 3D at Universal Studios Florida today - officially opening one of its most highly anticipated entertainment experiences in years.

The new attraction is based on the popular TRANSFORMERS films and created along with the award-winning director of the film series, Michael Bay. It blends a powerful storyline, powerful technology, all-new hyper-real animation and massive sets into an action-adventure that grabs riders and does not let them go until the very last second.
Riders are recruited for a high-tech, good versus evil battle in which they must save Planet Earth. They join iconic film characters Optimus Prime and the Autobots as they fight Megatron and the Decepticons to the end.

The 3D-action is mind-blowing and everywhere all at once; the 4K high-definition animation breathtakingly real. Riders burst into battles between "life-sized," three-story-tall Autobots and Decepticons. They dodge relentless attacks, explosions and missiles. And they come face-to-face with Megatron - who wants to destroy them.

TRANSFORMERS: The Ride - 3D was created under license from Hasbro, Inc. TRANSFORMERS films, television shows and merchandise based on the iconic Hasbro property have captivated millions of people all over the world for thirty years. To date, three blockbuster films have been released – “TRANSFORMERS” (2007), “TRANSFORMERS: REVENGE OF THE FALLEN” (2009) and “TRANSFORMERS: DARK OF THE MOON” (2011) – grossing more than $2 billion combined worldwide at the box office. The three films were directed by Michael Bay, executive produced by Steven Spielberg and released by Paramount Pictures. The fourth TRANSFORMERS film is scheduled to be released in June 2014.

For more information about Universal Orlando and TRANSFORMERS: The Ride – 3D, visit http://www.universalorlando.com.

About Universal Orlando Resort
There are many ways to enjoy your Orlando vacation, but there is only one place where vacation becomes adventure: Universal Orlando Resort. It is a unique destination featuring two theme parks, three magnificently themed on-site hotels and a nighttime entertainment complex. It’s the only Orlando destination where you are not just entertained – you become part of the most exhilarating entertainment ever created. You can soar above Hogwarts with Harry Potter, swing above the streets with Spider-Man, be transformed into a banana-loving minion in the hilarious and heartwarming Despicable Me Minion Mayhem ride and help Shrek save Princess Fiona in Shrek 4-D. Universal Orlando Resort is an NBCUniversal company. Oh, and so is the guy with the goatee. Hi, Ryan.

Re: Transformers: The Ride - 3D VIP Red Carpet Coverage (1497162)
Posted by Sabrblade on June 21st, 2013 @ 5:55pm CDT
The grand opening was a blast. Literally. They had pyrotechnics and explosions going off over our heads during the ceremony. General Morshower gave a speech, Megatron issued an ultimatum, N.E.S.T. soldiers went wild with their weapons, fireworks shot off simulating missile strikes, and the "Black Diamond Jet Team" soared over the ride area of the park to take part in the battle.

And we were all standing right in front of Peter Cullen and Frank Welker as they walked down the red carpet to shake our hands, take our questions, and get photos and videos taken by us all.

Oh, and Optimus and Bumblebee were dancing down the red carpet, posing for us. It was awesome.

Re: Transformers: The Ride - 3D VIP Red Carpet Coverage (1497269)
Posted by Va'al on June 22nd, 2013 @ 5:07am CDT
For all those of use who were unable to make it to Universal Orlando Resort for the grand opening of Transformers: The Ride 3D, Seibertron.com owner Ryan not only took plenty of pictures, he has now uploaded a playlist with thirteen videos from the event!

Take a look at a selection below, including the walkthrough, chat with Peter Cullen and Frank Welker, Steven Spielberg, and check them all out by clicking here.


Re: Transformers: The Ride - 3D VIP Red Carpet Coverage (1497614)
Posted by SlyTF1 on June 24th, 2013 @ 6:26am CDT
I rode the ride 3 times in the past 2 days (while I was still down in FL), but I'm still mad I didn't get to go to this.
Re: Transformers: The Ride - 3D VIP Red Carpet Coverage (1499759)
Posted by SpaceSkull on July 1st, 2013 @ 12:58am CDT
I was so lucky to have the opportunity to attend the opening weekend of this awesome ride. Express pass was able to get me through the line incredibly fast the first day we rode Saturday. Got to ride it twice under 20 minutes and then the line started to get long. Next day rode once and waited about 25 mins if that but the regular line was soooo long. Got to also see all three Cosplay robots. All looked great. The ride is a lot of fun. Nice to see all those characters. Details were terrific. The giant statue of Optimus is amazing. The first thing that really grabbed me was the music. It's loud and it's great. All day my kid was humming that song. Even my wife loved the Optimus scene so much it brought a tear to her eye. If you can, try it out. Wanted to get an Evac figure but he's pretty expensive for not so much detail. 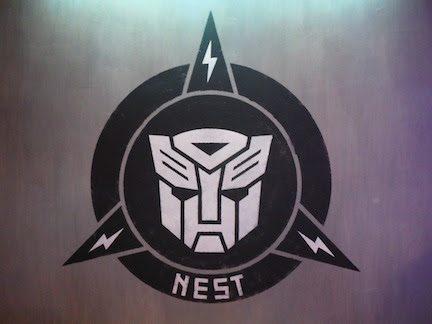 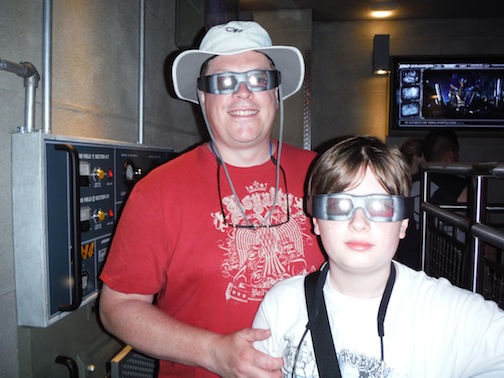 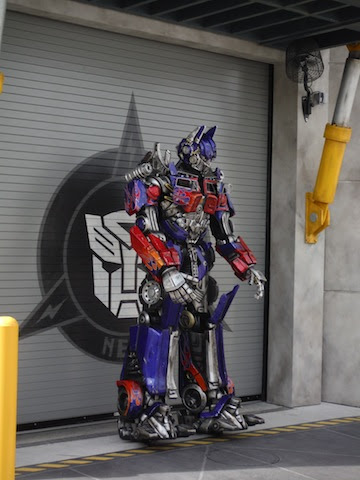