Transformers - The Ride, Open to the public! 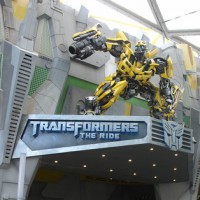 Opening a day early, Transformers The Ride has launched at Universal Studios, Singapore! The 3d motion ride comes straight from the movie series with a new Character, Evac and maintains the fast paced, high action explosiveness of the movie trilogy.

More information on the ride and Universal Studios can be found be found here.

Autobots, roll out! The world's first Transformers theme park ride opens in Asia at Universal Studios Singapore (USS) on Dec 3 in time for the school holidays. The world premiere was announced on Dec 2, a day before its official opening to the public. Guests to Transformers The Ride will get to board a new Autobot, Evac, specially created for the attraction. They will get to experience a four-minute epic motion thrill ride which takes them zipping through subway tunnels, down city streets and across rooftops, with the Decepticons hot on their heels. AsiaOne gives you a sneak preview of the action here.

We also have a video from the ride from YouTube user patricklove embedded below.

Re: Transformers - The Ride, Open to the public! (1319206)
Posted by Rushie on December 3rd, 2011 @ 11:58am CST
Huh.
I'm kinda disappointed with the ride itself. Seems it just consists of random encounters and subsequent escapes. I know there's only so much you can do with a first person view from a moving vehicle story-wise, but I was expecting Evac to make a robot mode appearance at some point.

The dialogue, while a little difficult to make out here and there, seems to be right out of the movie script. The whole thing feels like a bunch of deleted movie moments (face it, each segment is too short to be a 'scene') in a reel. Devastator's five second appearance was especially jarring.

Judging from the people's reactions during the ride, especially the woman, this seems to be one of those rides that incorporates huge unnessecary tremors for every little bump going on in the filmmaterial. Those jolts and wiggles never worked for me to enhance the idea I'm actually inside the film. Rather, they distracted because they're so over-the-top.

On the bright side:
The aforementioned dialogue fits the Movieverse like a glove and it's always cool to see more of otherwise barely-visible designs like Sideways. The action and animation, though obscured by the double-layered 3d image, is pretty awesome to see. The queue, both decoration and queue videos, really evokes the NEST atmosphere and the store makes me drool.
Re: Transformers - The Ride, Open to the public! (1319592)
Posted by TulioDude on December 4th, 2011 @ 4:50pm CST
Must...get...to Singapore!