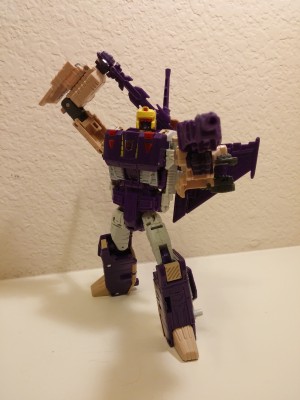 As we all gear up for the rush that is going to be San Diego Comic Con this weekend, why don't we take a second and sit down with one of the newest and most anticipated figures to come out of Titans Return. Come along as I go though the Pros, the Cons (heh), and everything else in between in the latest episode of:

As always, I am BronzeWolf and today's stuff is Titans Return Blitzwing! 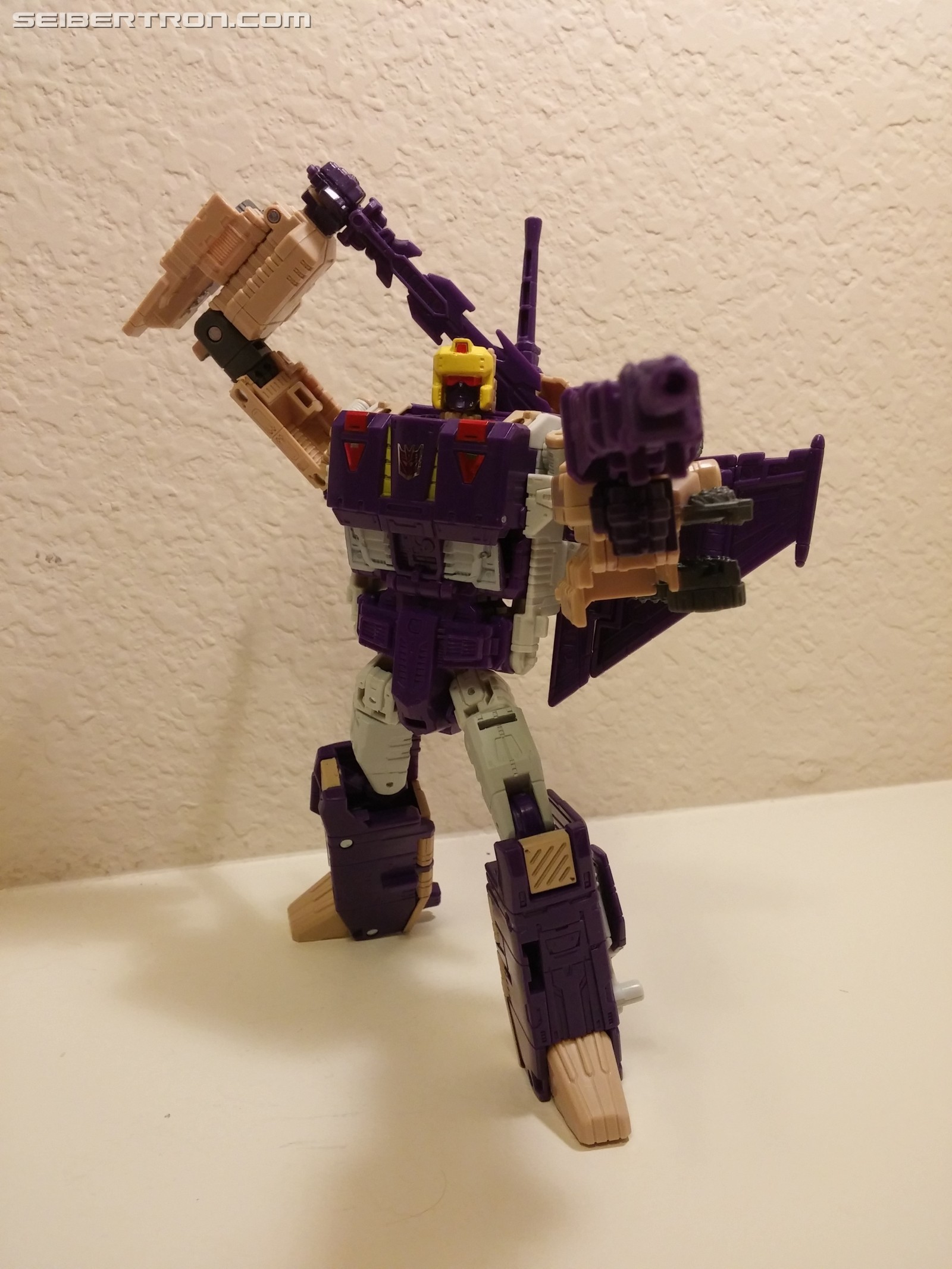 Blitz comes from the 5th wave of TR, and very obviously shares a mold with that Voyager Megatron from wave 3, although it's common knowledge by this point that the mold was always intended to be Blitzwing. 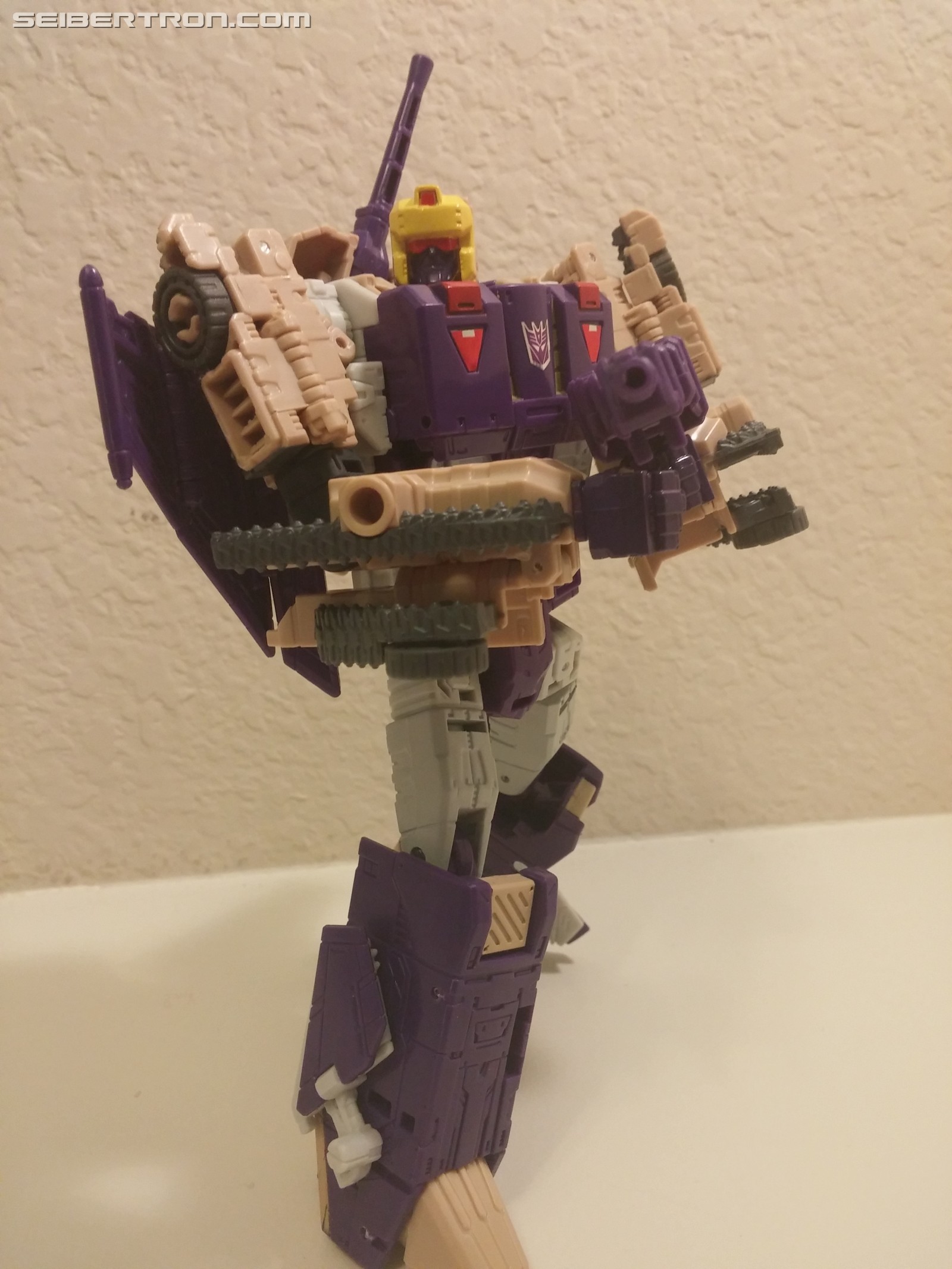 Jumping into the figure's articulation, he is missing a few key points. The waist, wrist, and (save for some point due to Transformation) foot poseability are the most notable lackeys, but his back jet wings on his legs can rotate down and serve as small braces of sorts, helping him get into more dynamic poses. 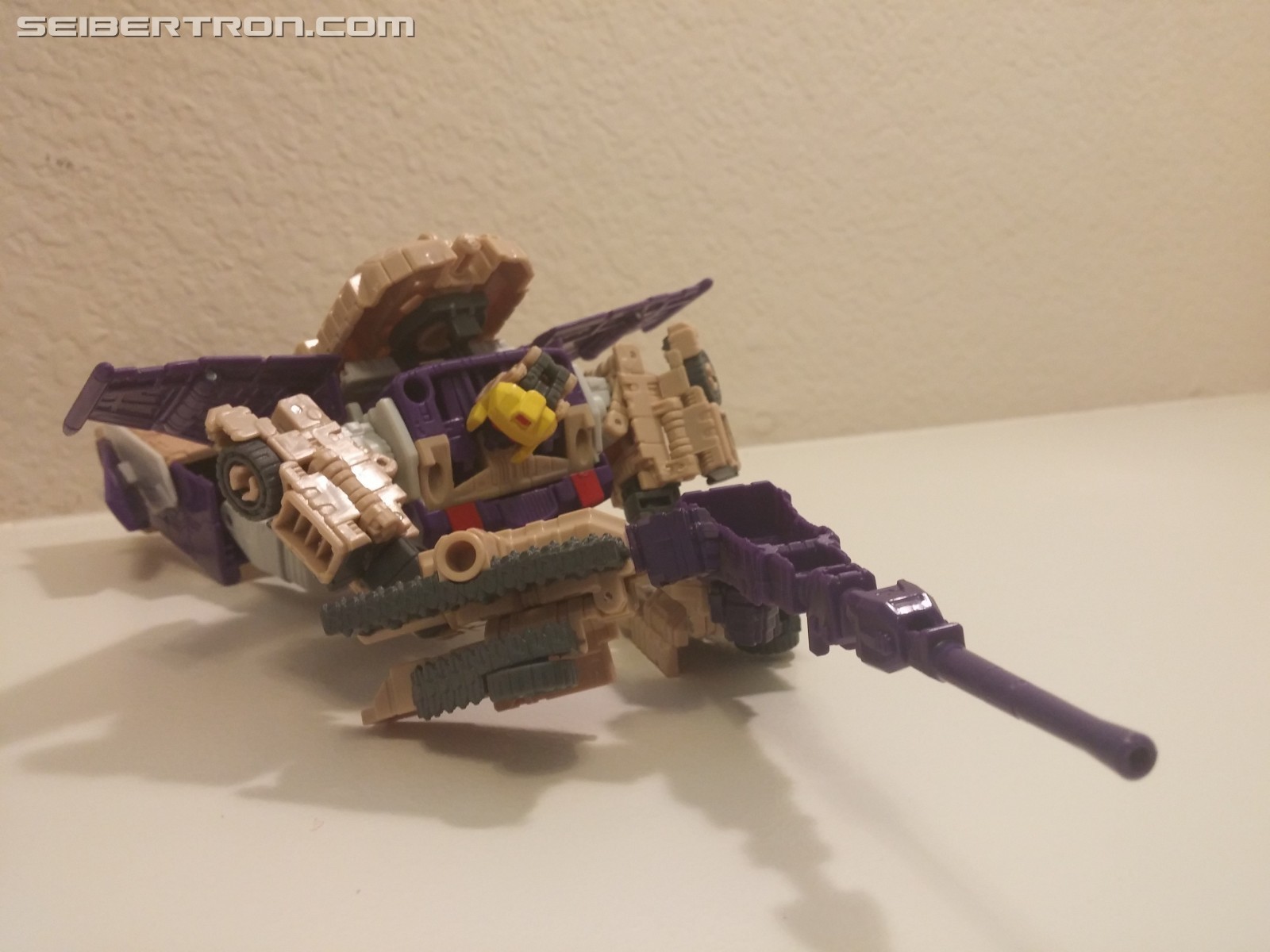 The size of this guy is nice, and suits the character well. He looks good on his own, with a lot of his vehicle mode bits integrated very nicely into his robot mode, (I especially like the mechanical look of the arms) but he really comes into his element when next to his friend, companion, and fellow G1 triple changer, Astrotrain! 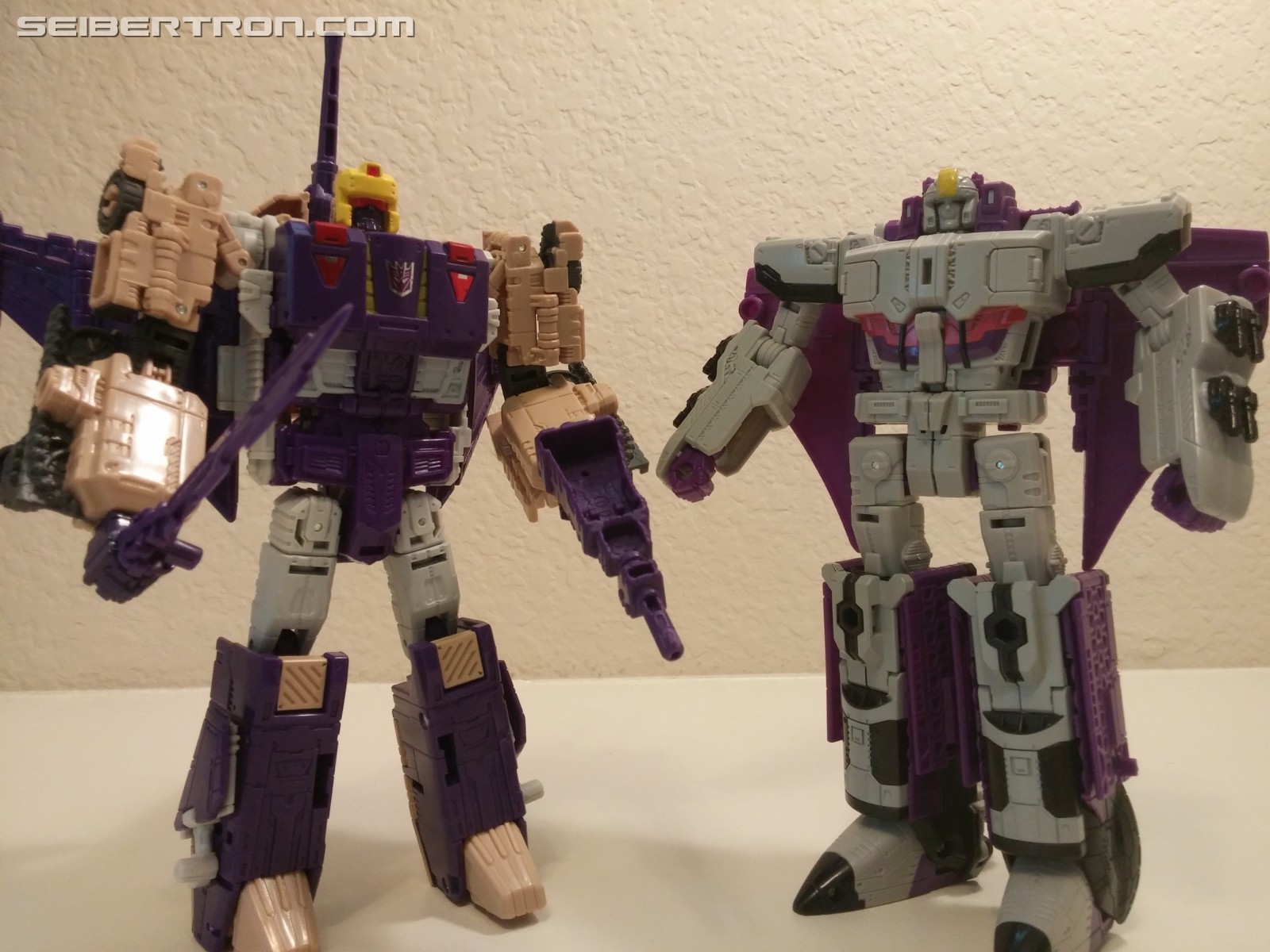 Throw a Megatron in there, add some Autobots? You get some battle scenes that will make him right at home in any display or on any shelf. 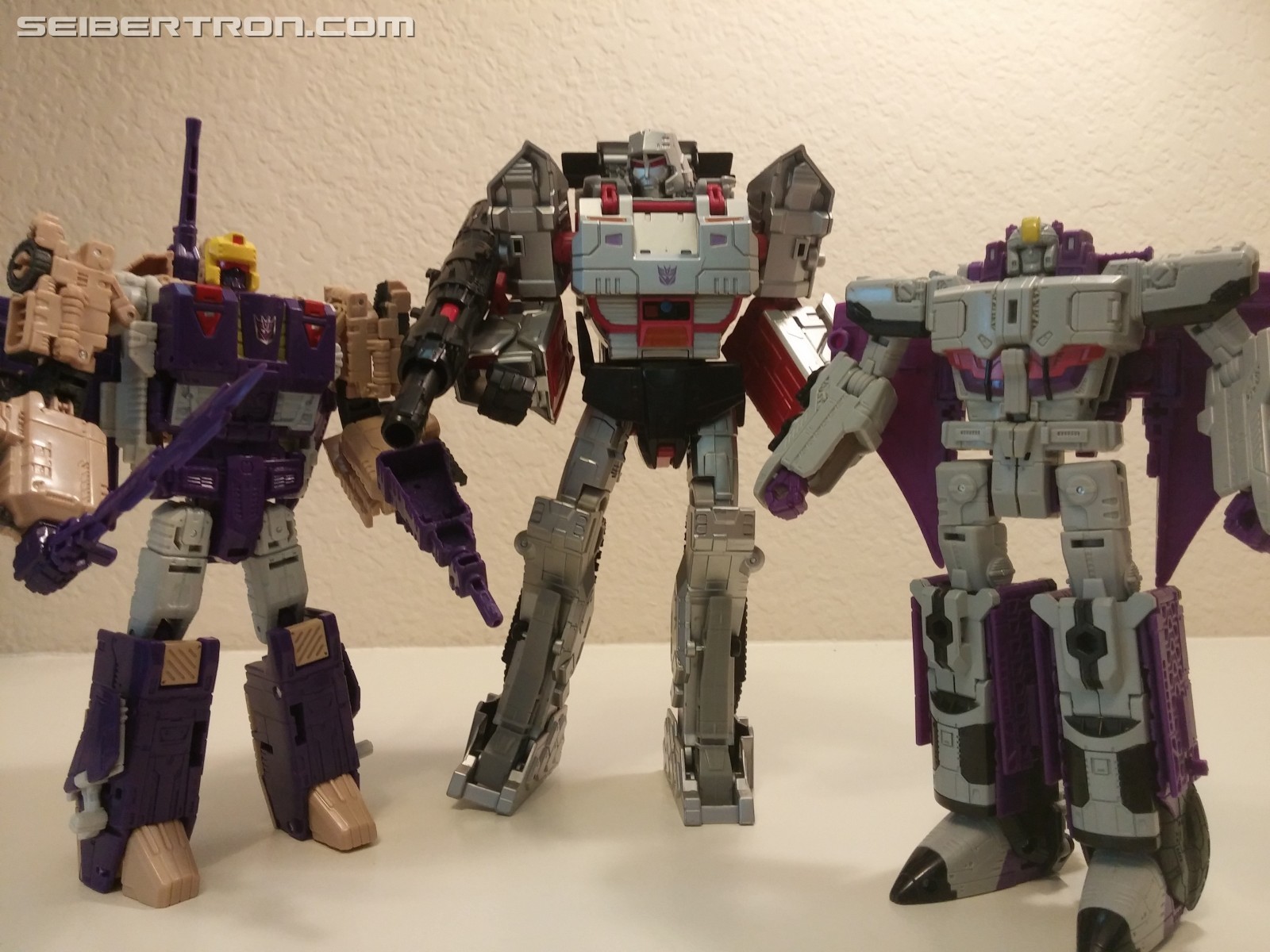 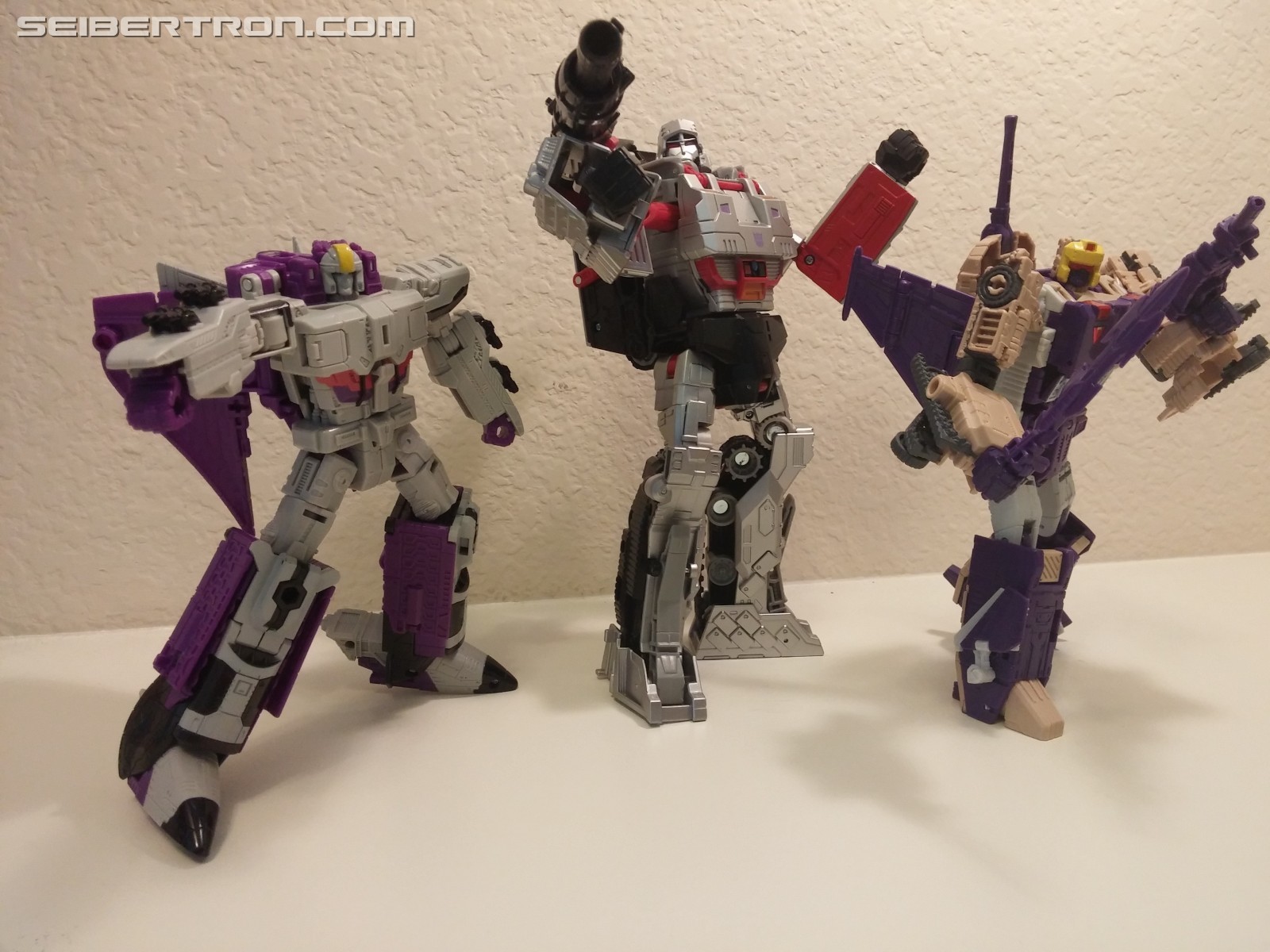 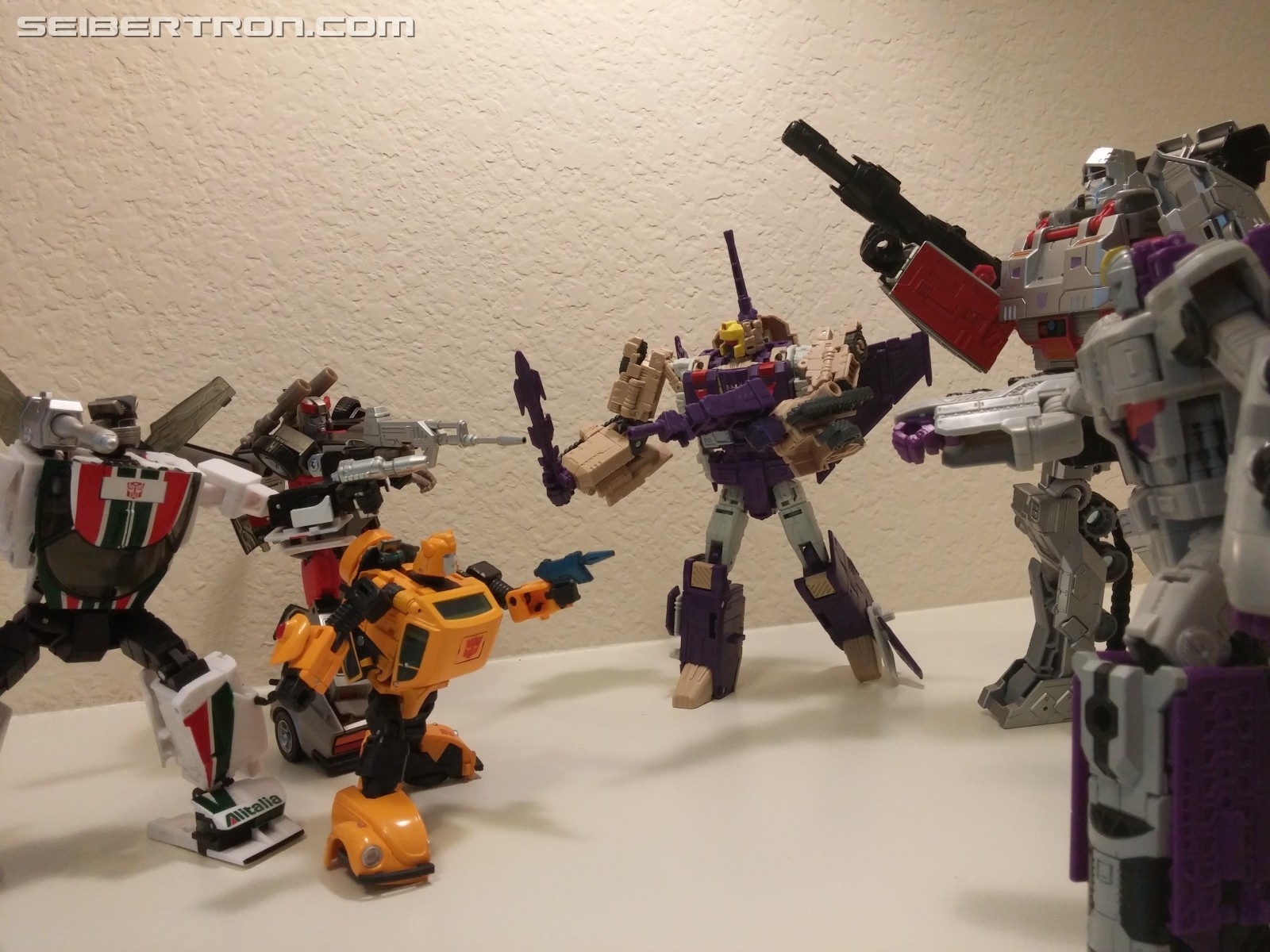 And just for good measure, here he is with another recent TR figure, Sky Shadow! 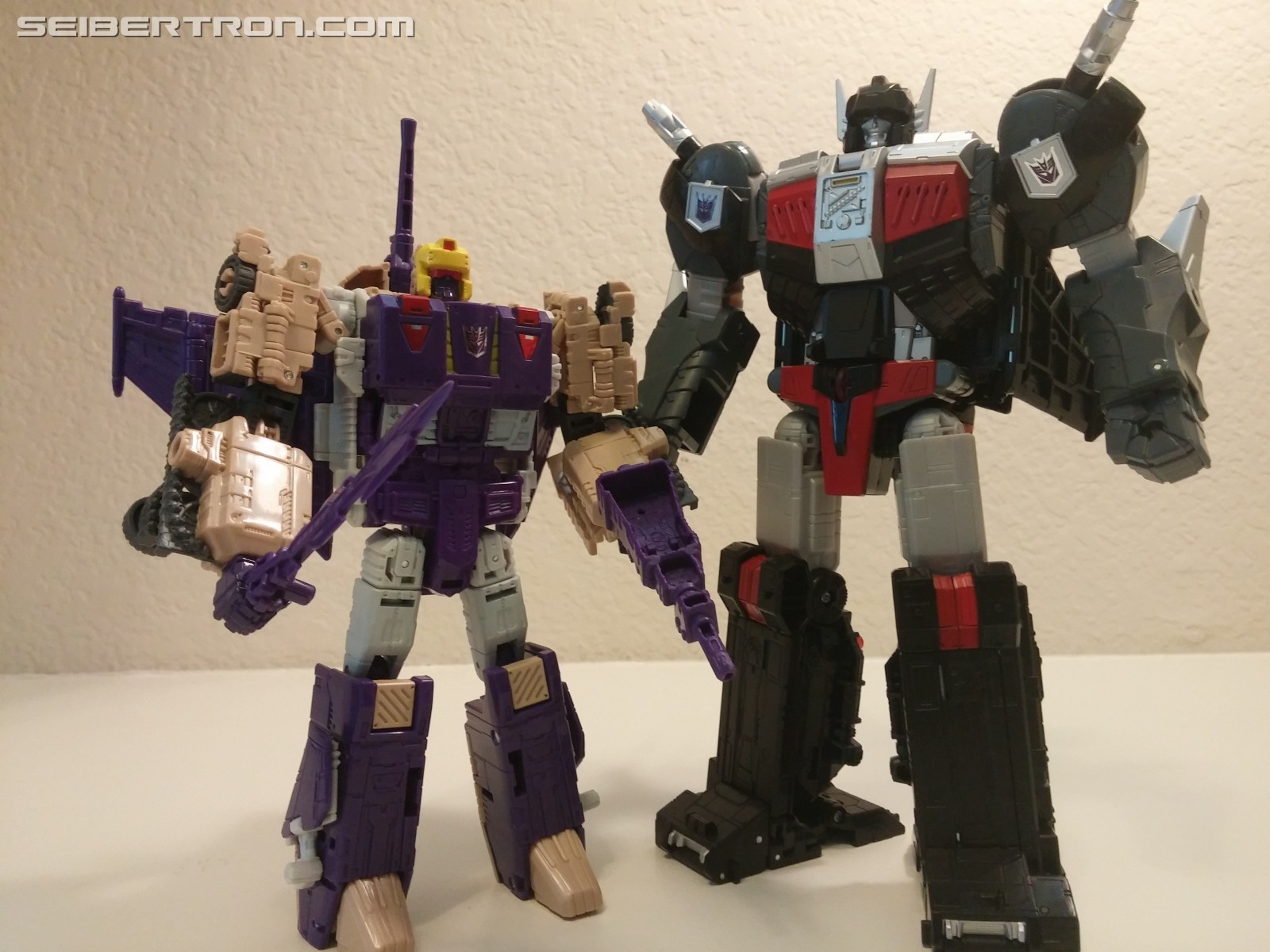 As I mentioned, he is a triple changer, meaning we have two more modes to get through! Let's start with tank mode, which, unfortunately is where most of my issues lie, but I'll dive into that more later. The good news is his tank mode looks solid, well rounded and complete (or, at least, as solid as a triple changer can look.). The only distinct piece of his jet mode visible here, other the the cockpit underneath his turret, the two wings wrapped around the side of the tank, but that's excusable since it's part of the classic Blitzwing design. 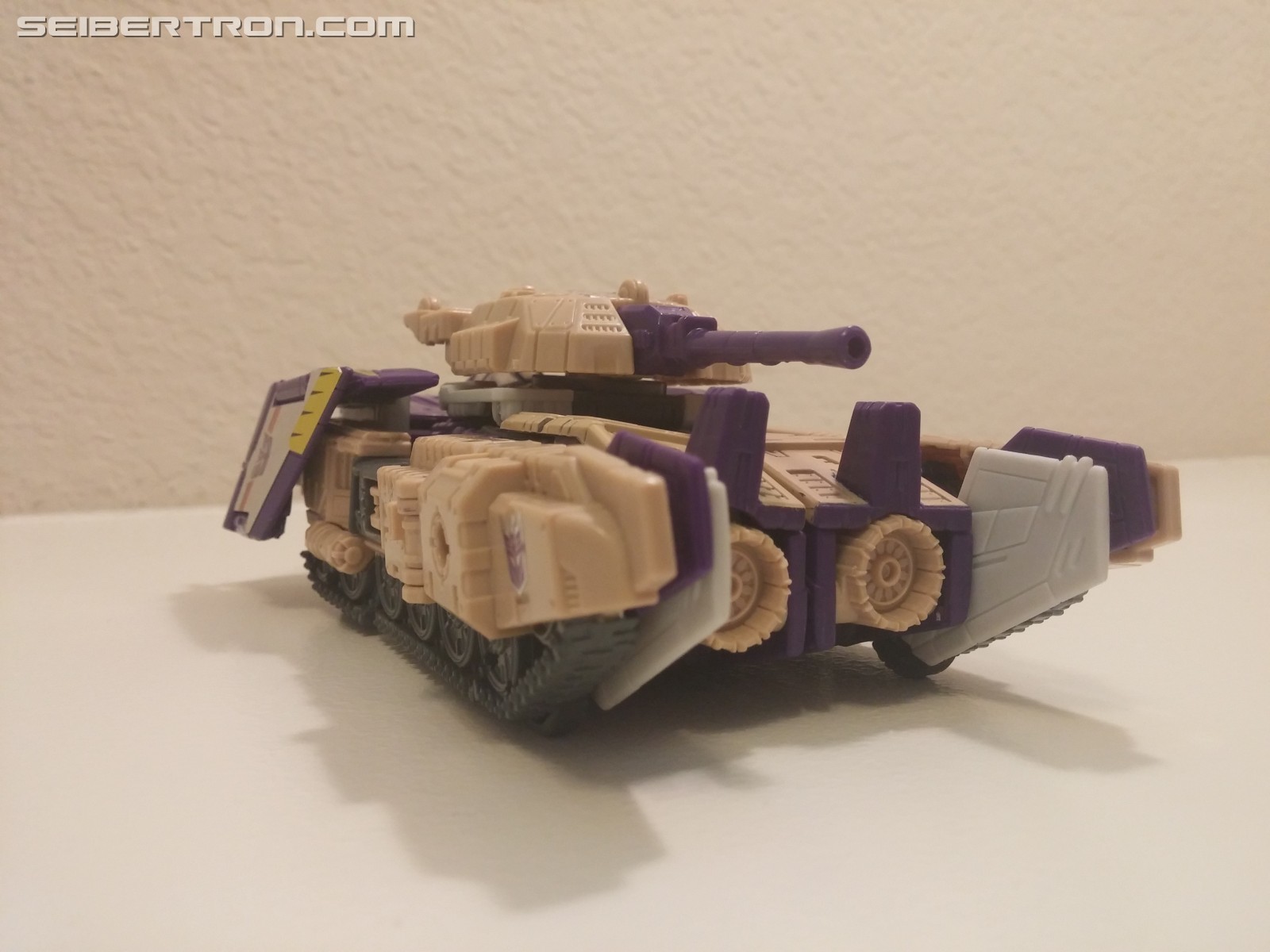 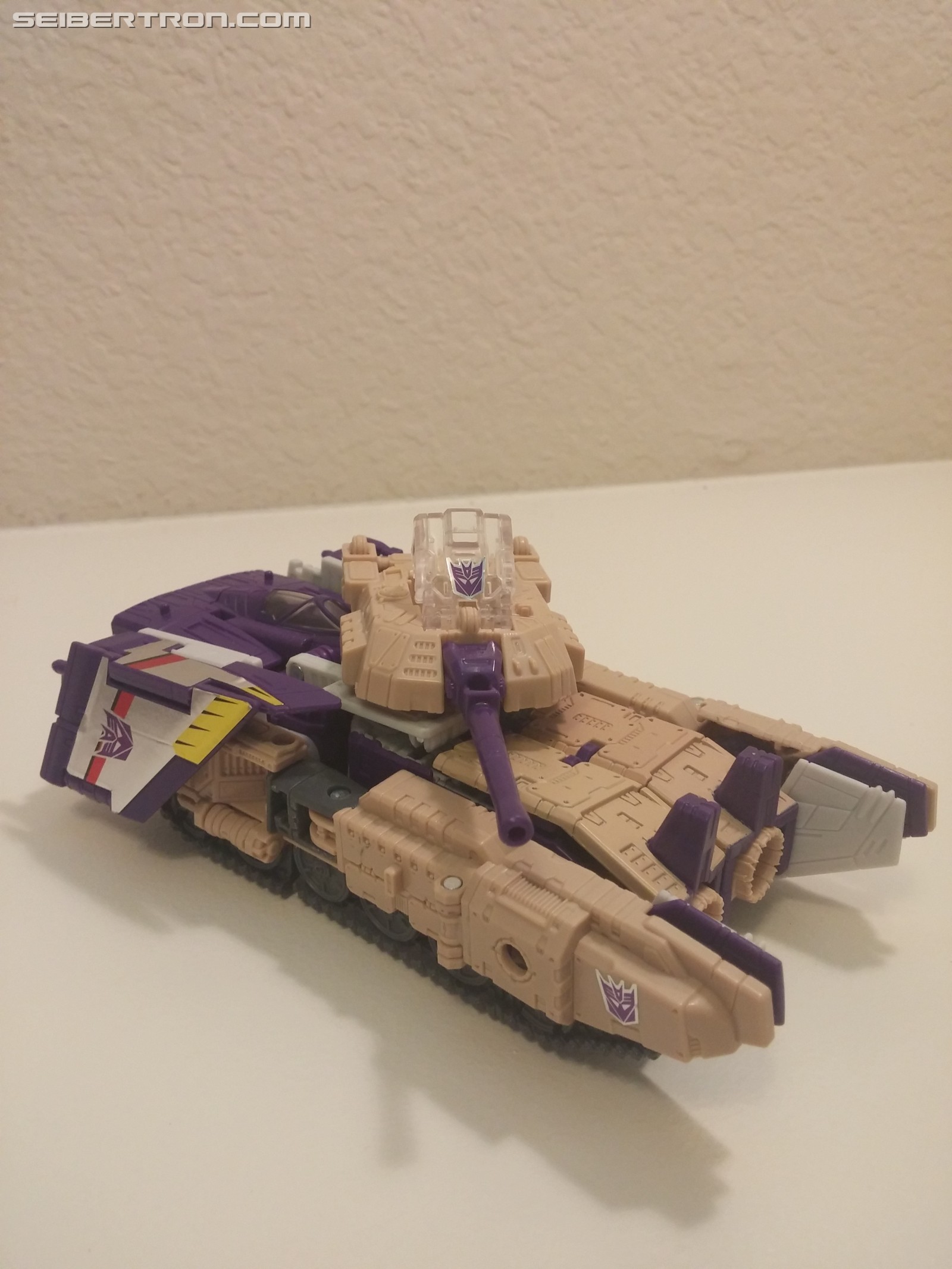 Next up is the jet mode, and this is where the figure starts to shine. Yes, just like any jet transformer, he has kibble, but it almost kind of works. The thickness and bulkiness of the undercarriage still manages to flow into the nose cone, rounding off the shape of his jet really nicely. 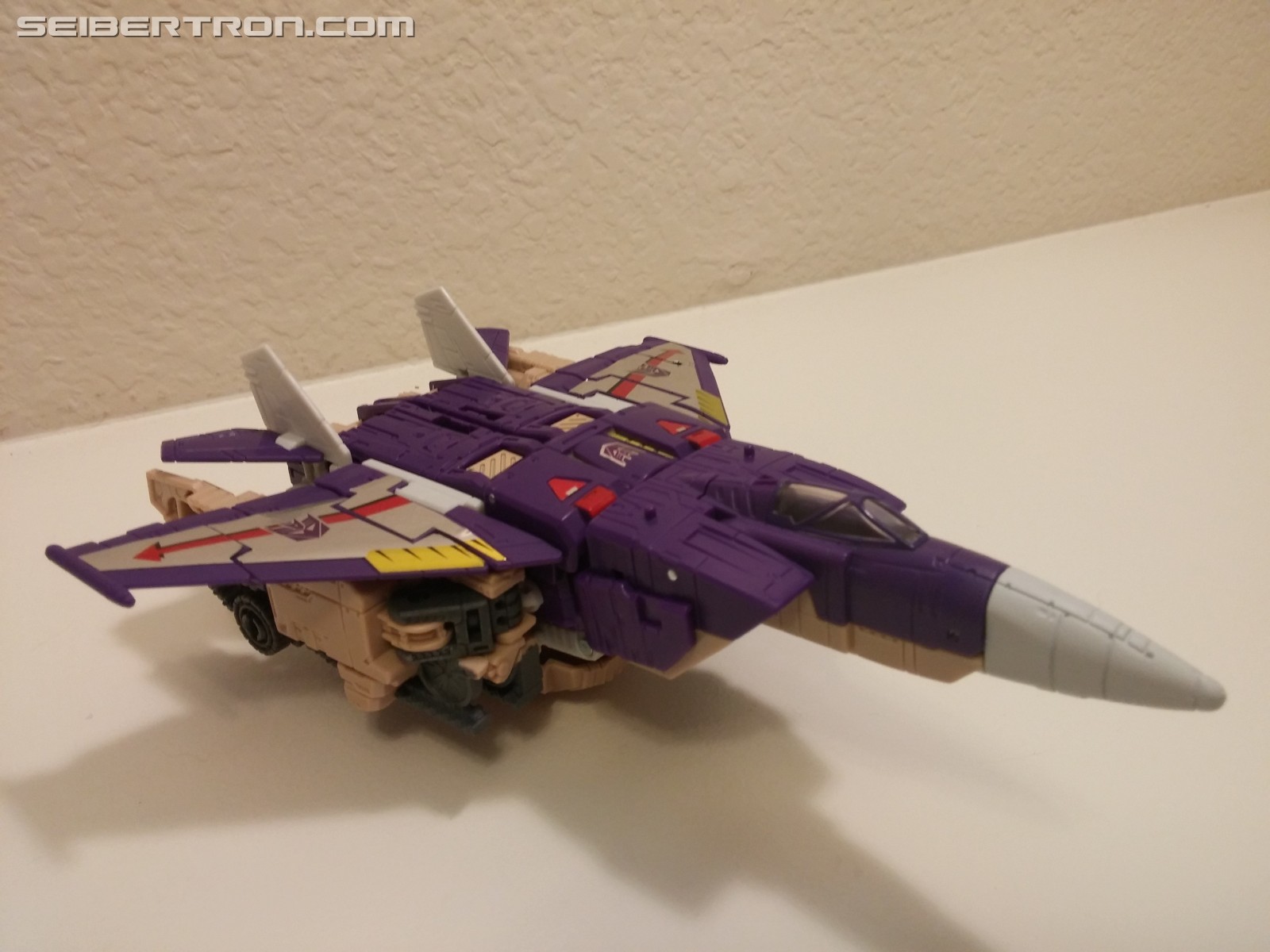 Yes, the arms probably could have been engineered better to streamline the profile of the wings, and the tank turret, despite just hanging there, can make a pretty good flight stand! 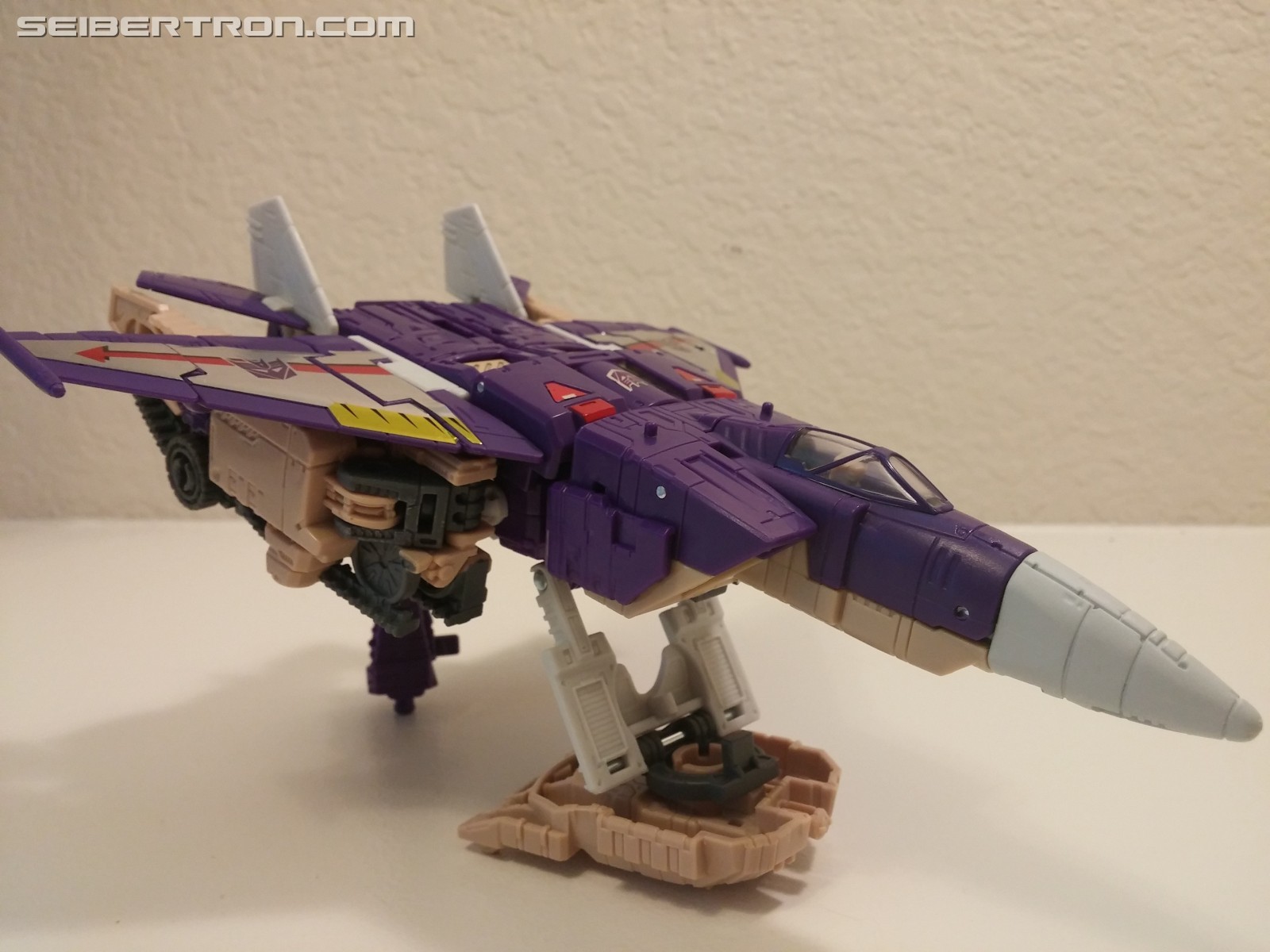 And, of course, Blitzwing is a Titans Return figure, and just like every other TR figure (Deluxe and up) he has a Titanmaster, so there's two ways to integrate him into the two alt modes. 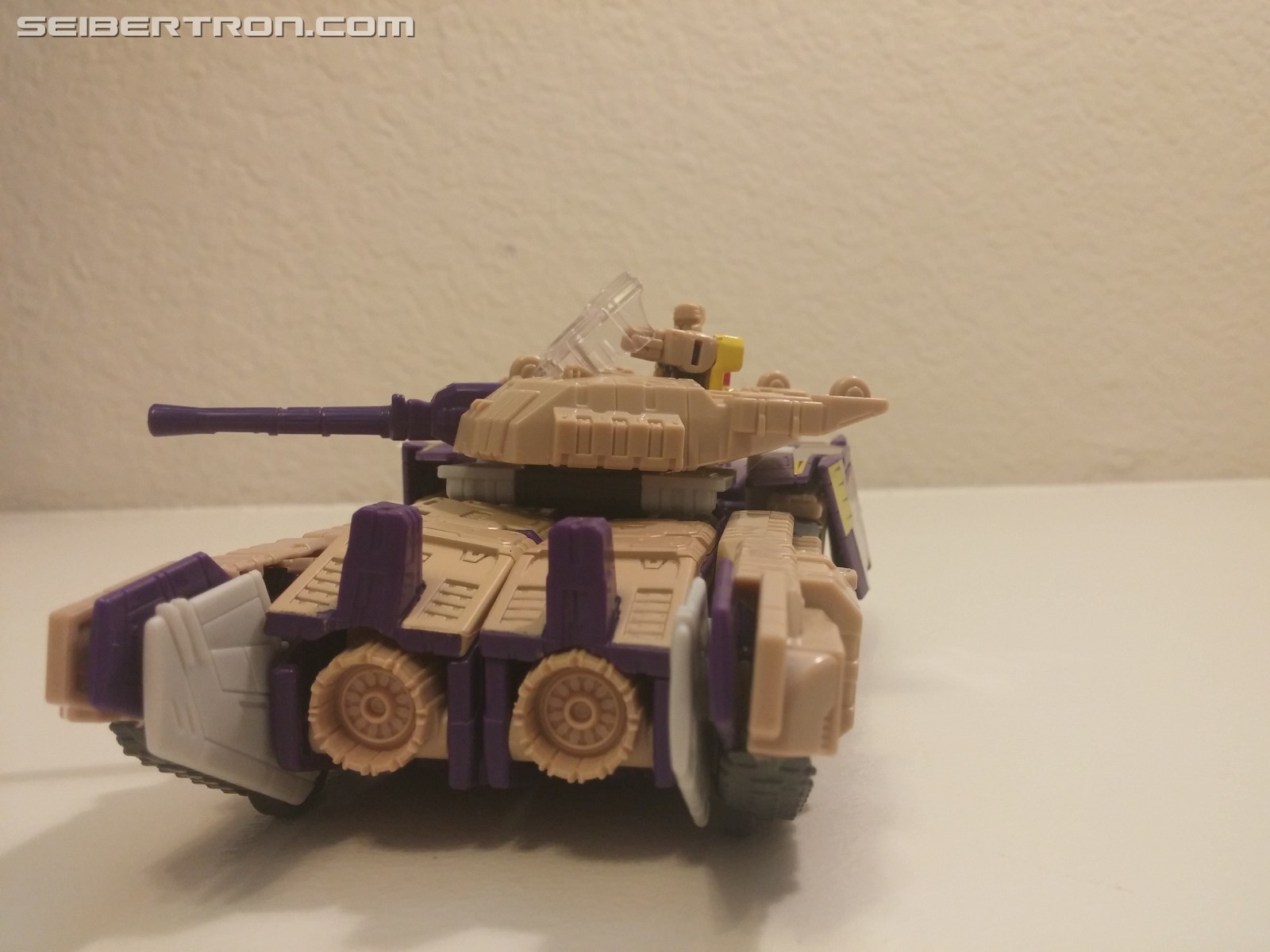 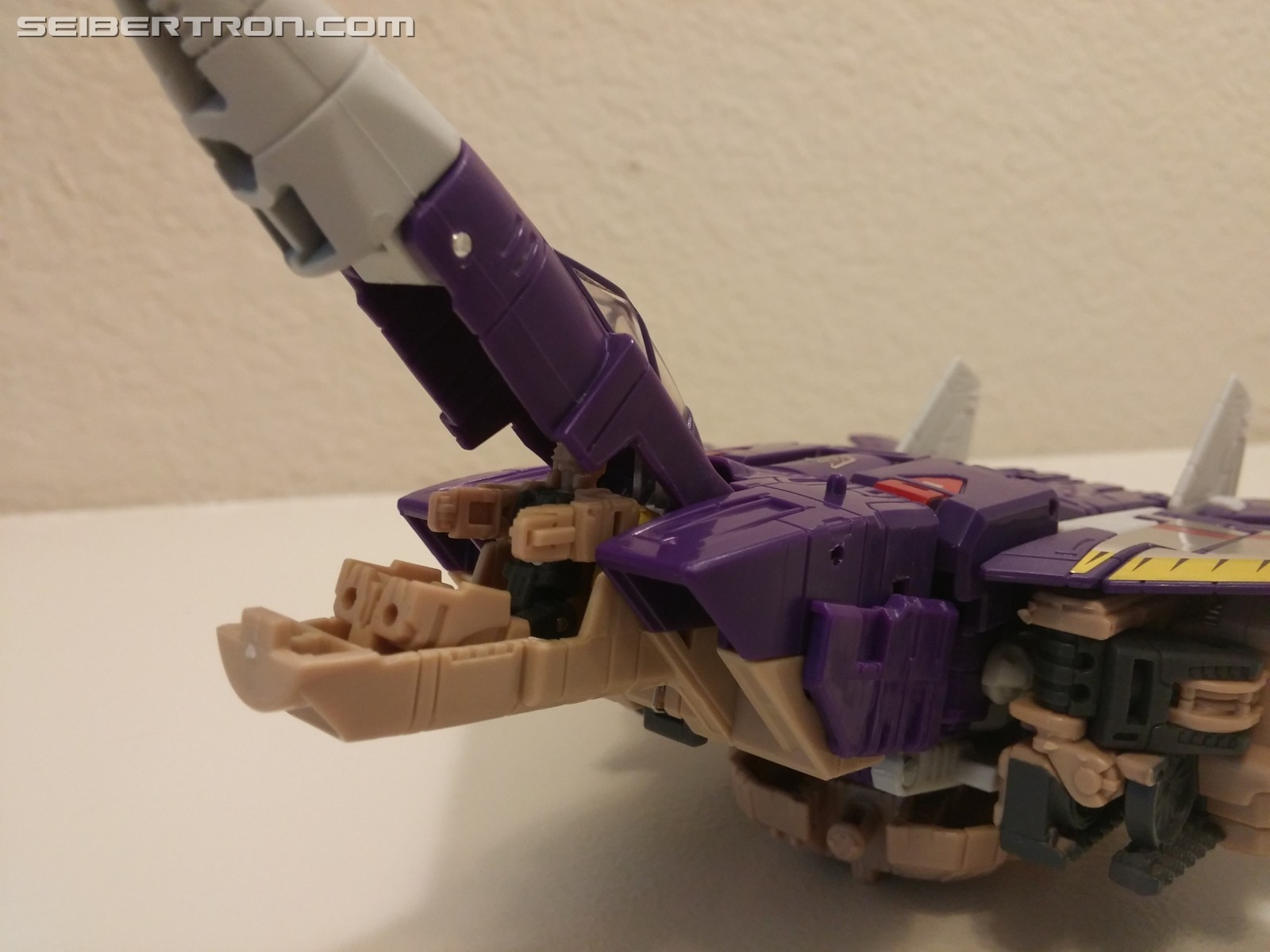 Now finally, we can talk about my issues with the figure. Some of them might be specific to my copy, but I want to share regardless.
First, the panel on the back of the leg is in the way of the foot flipping out for transformation. The foot won't clear it unless you've folded it all the way out, but even then the foot scrapes it. This could have totally been avoided with the addition of a double hinge for that panel. 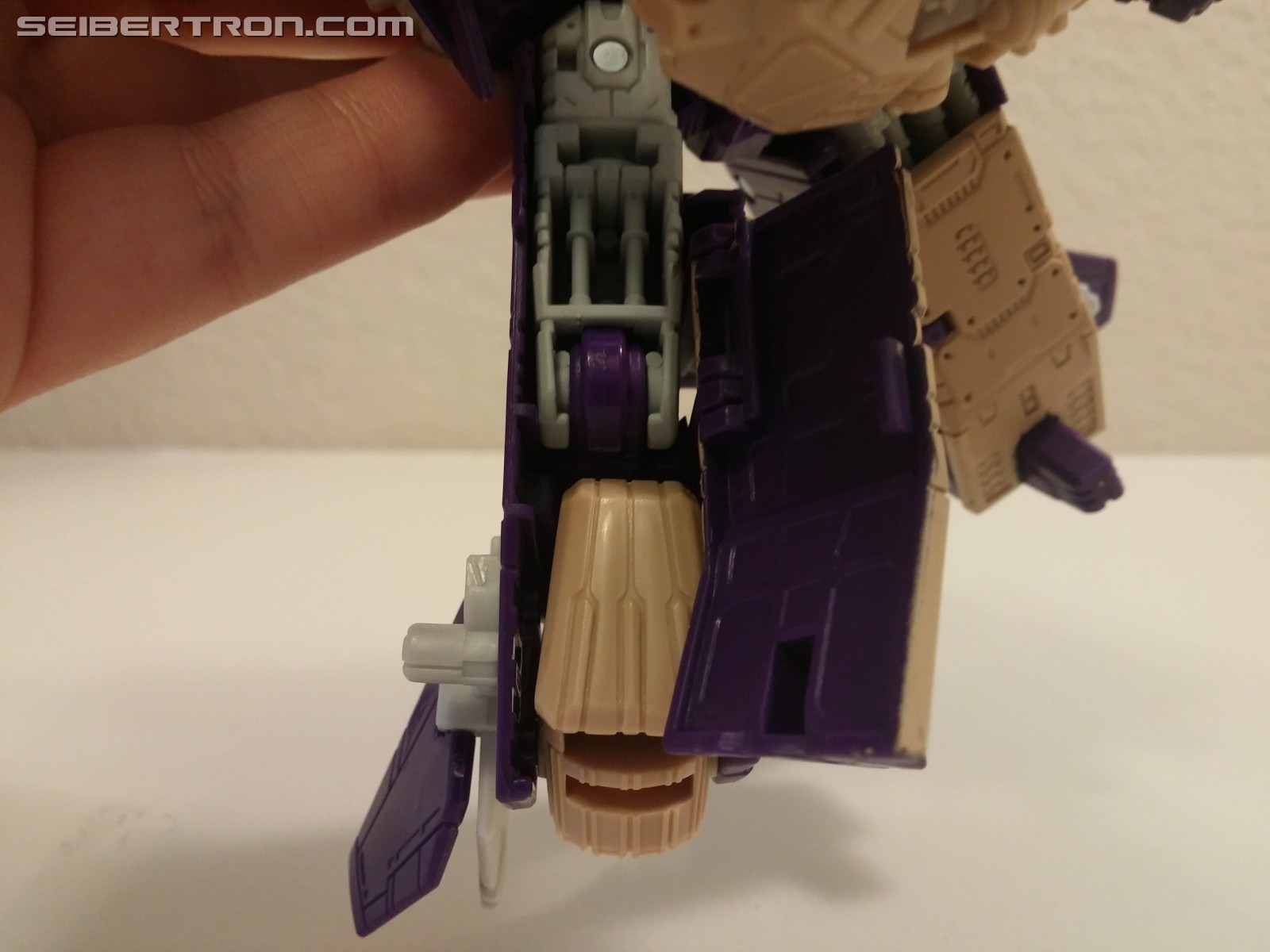 Speaking of these panels, one of mine will not clip closed. It's not because anything's in the way, it just won't stay shut, which looks kind of ugly in tank mode. They're also two different colors, which you can hopefully sort of see here. 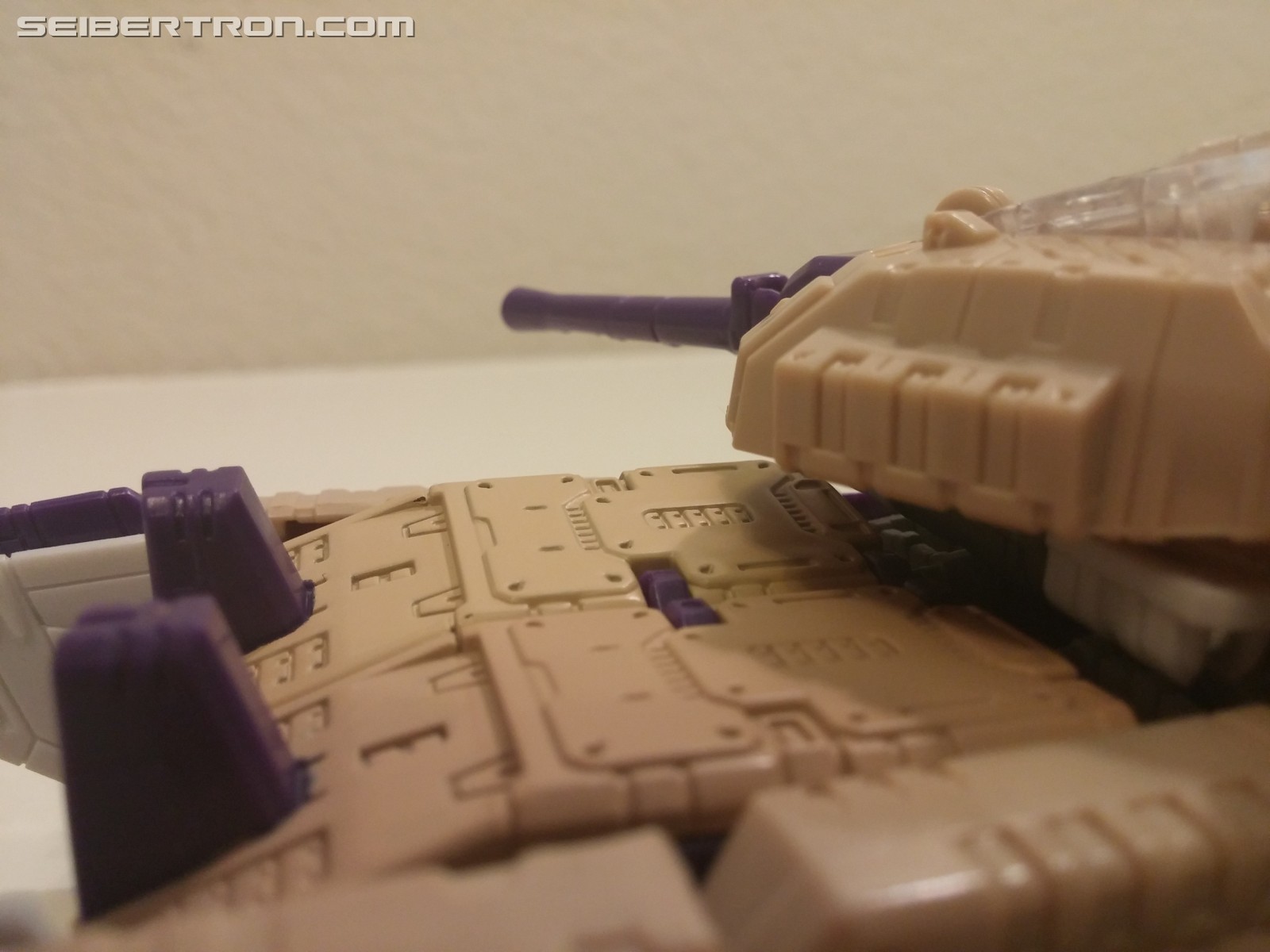 The Grey nosecone for jet mode has to flip out and click in. Unfortunately it's painted, so that paint has already started to chip a lot because of the tab it clicks into, despite only being transformed a few times. 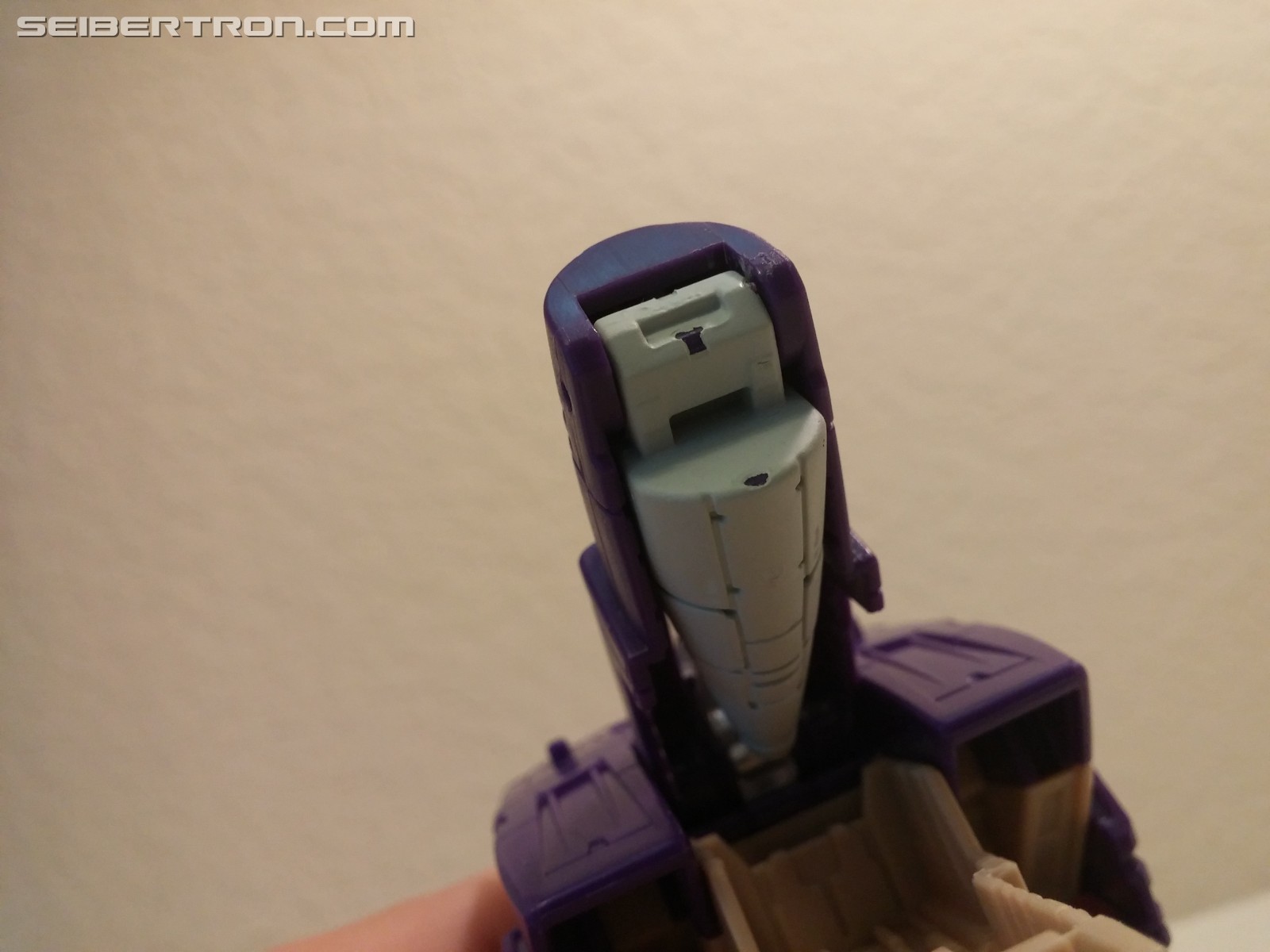 In tank mode, the knees will sometimes get in the way of him rolling, and there's not a lot you can do. Oddly enough, there's this slot in his upper leg that looks like it would fit the peg for his knee joint, if it wasn't just out of reach. It would help loads, if fully executed, because it would make the knees pop in just enough to give him full clearance. I could totally be doing something wrong, so please let me know down in the forums! 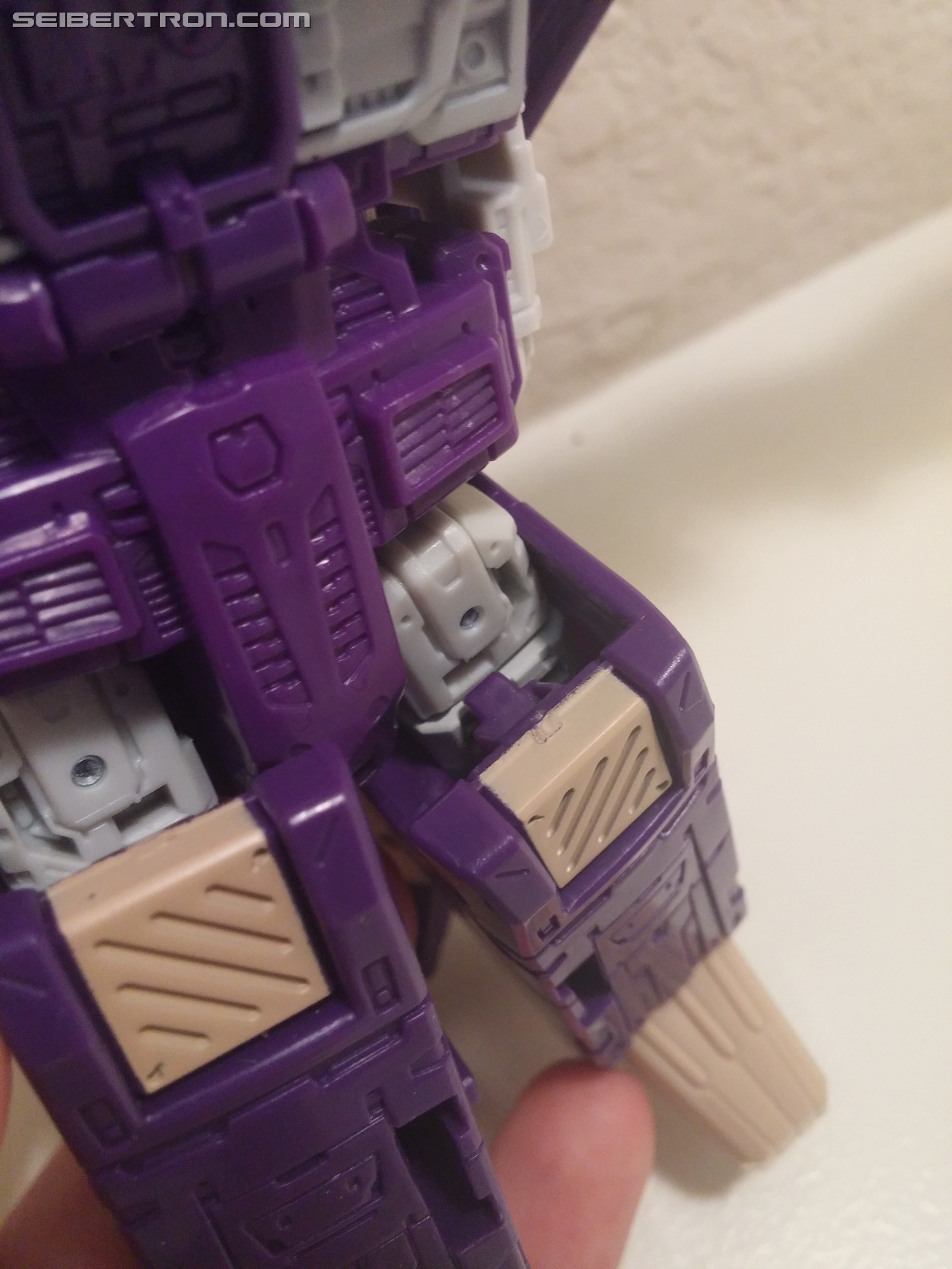 Thankfully, it seems the foil stickers are getting better in quality. Mine are surviving pretty well, even with me messing with him for a while.

So overall, Blitzwing is a great figure. Other than the occasional problem, he brings the presence of Blitzwing and represents the character very well. He's great on his own, but is amazing as a companion piece to Astrotrain. I recommend picking him up if you've got a Blitz-shaped hole in your collection.

I hope to make BronzeWolf Reviews Stuff a more regular and frequent series, although some may not get posted on the front page, especially if I start doing older figures, so make sure to keep checking over on the Toy Review forum!

The tabs on the knees will go into the upper legs. It really takes some work to get them in there on the first try. After a while you get the hang of it and they tab in a bit easier. I went through the same issue with Megatron. That is probably why the leg flap won't close on yours.

and yeah, the leg tab is a thing, but it CAN be done. You really have to work the knee joint. I leave the back flap open on mine so I can put pressure on the knee with one hand, while I push the tab into the slot with my other hand.

Like Rodi Con said, once you get it the first time, it definitely gets easier.
Re: Transformers Titans Return Blitzwing Pictorial Review (1897434)
Posted by Bronzewolf on July 18th, 2017 @ 2:43pm CDT
Thanks guys! I appreciate the feedback! Yeah, I'll have to try to pop the leg in, see if that solves any of my other problems. It's funny, though, the other leg I obviously don't peg in, but the panel stays down.

Further testing is required!
Re: Transformers Titans Return Blitzwing Pictorial Review (1897448)
Posted by RNSrobot on July 18th, 2017 @ 3:12pm CDT
I know I'm way in the minority here, but as much as this was intended for Blitzwing, I prefer it as Megatron! I can't quite put my finger on it. In pictures his colors just don't quite work for me, and I think Megs being more gray all-around helps some of the issues. I dunno. Proportions, somehow.

RodimusConvoy13 wrote:Good Review. I just got this guy about a week and a half ago and I love him.

The tabs on the knees will go into the upper legs. It really takes some work to get them in there on the first try. After a while you get the hang of it and they tab in a bit easier. I went through the same issue with Megatron. That is probably why the leg flap won't close on yours.

The knees are still a problem in tank mode even if you get the legs to tab in correctly. At least on mine.

Yea, I ran into the same problem with the leg flaps not staying closed and after looking over the figure very closely and doing some fiddling I was able to get the tap into the leg and that solved all the leg problems. As already said, despite it being a tight fit it will actually fit and you shouldn't have any trouble with the flaps any longer.
Re: Transformers Titans Return Blitzwing Pictorial Review (1897667)
Posted by homicide on July 19th, 2017 @ 1:14pm CDT
I just wanted to share this pic that I took yesterday of the 3 Titans Return Decepticon Triple-Changers, all with Reprolabels. I absolutely love how these 3 look together, they look so much better than the previous versions we've gotten & of course the Reprolabels are just icing!