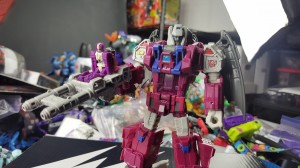 We're receiving several reports from Seibertronians about the recently revealed and limitedly available Transformers Titans Return Grotusque figure - as shown during NYCC 2017 and shortly after running out of stock at Hasbro for this run - already arriving for those who were able to order it, only two days after the order was placed!

If you were among the lucky US-based collectors who got in in time, make sure to check out your mailboxes. 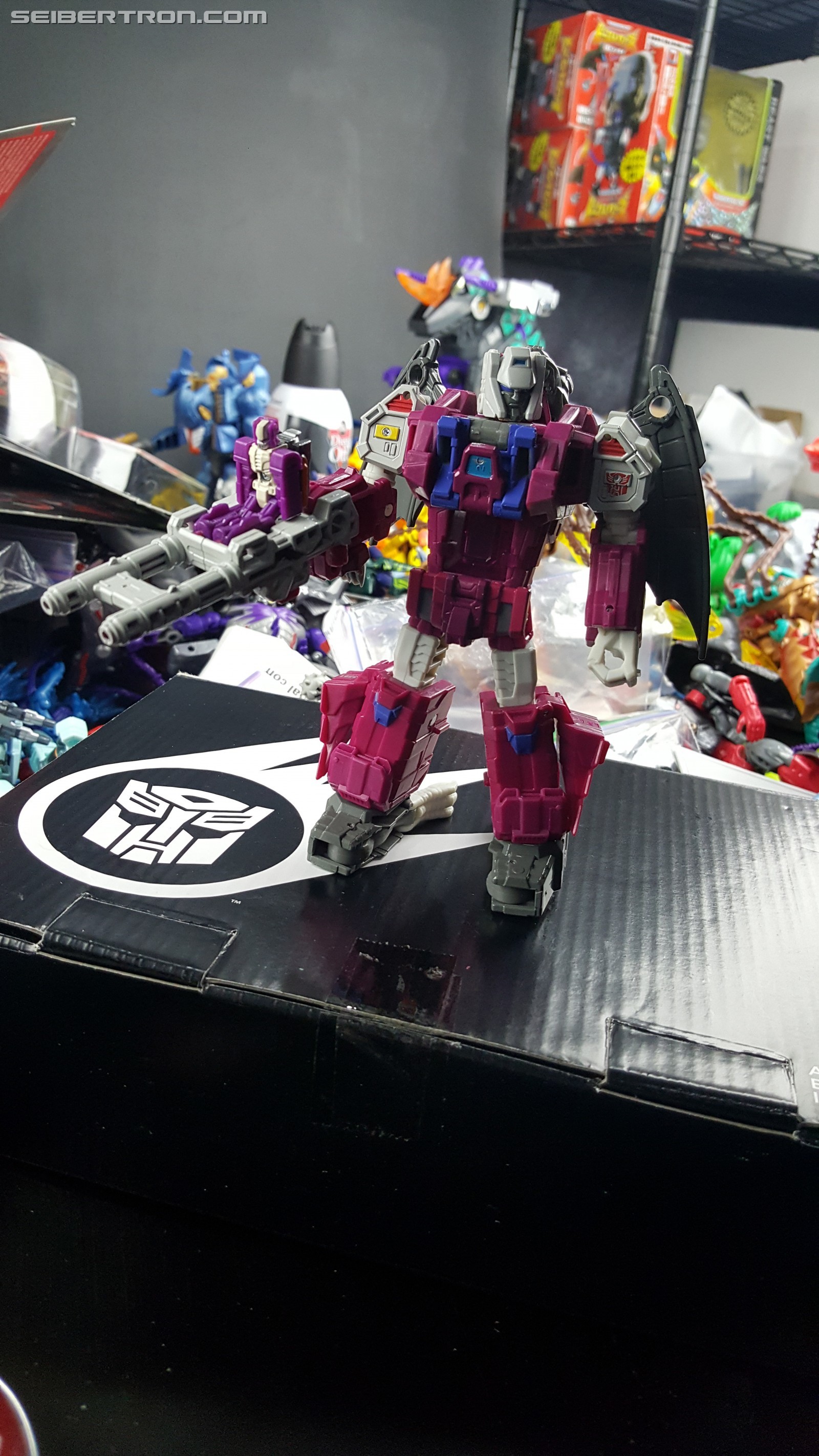 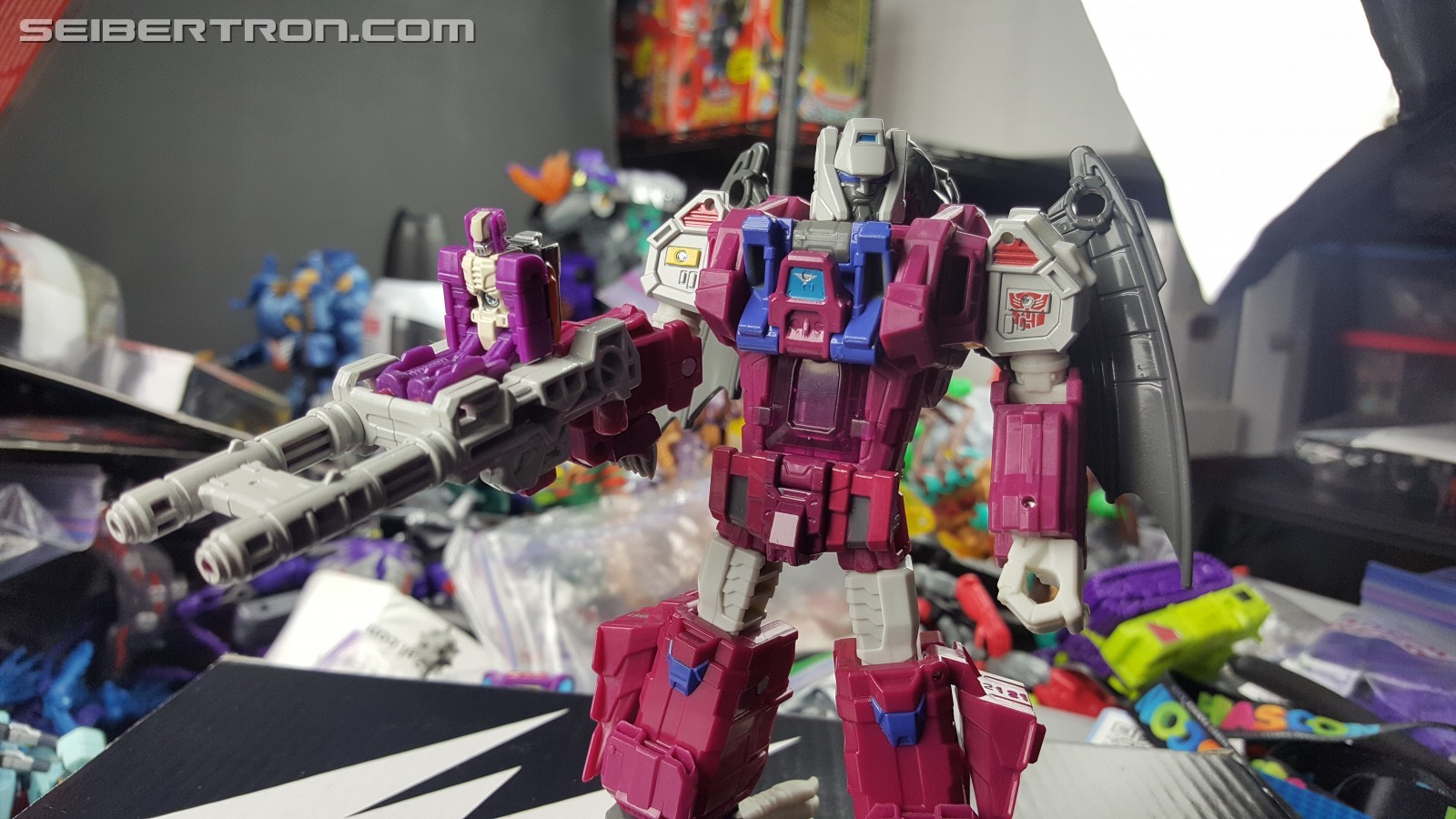 Posted 2 days ago
News Categories: Toy News, Movie Related News, Cartoon News, Comic Book News, Site News, Rumors, Event News, Digital Media News, Collectables, Sponsor News, Game News, Site Articles, Store News, Company News, People News, Press Releases, Reviews, Sightings, Unlicensed Products News, Auctions, Transtopia, Interviews, Knock Offs, Collector's Club News, Editorials, Heavy Metal War, Podcast, Contests, Book News, Top Lists
Click here to post your comment about this news story!
Re: Transformers Titans Return Grotusque Already Arriving, Two Days After Reveal and Release (1915309)
Posted by Emerje on October 8th, 2017 @ 6:45am CDT
I'm rather surprised TRU still has Arcee available for pre-order. That's promising for Grotusque if he does turn out to be a TRU exclusive (TFWiki says he is, but I don't know where they got that info from). But then again this is our first Grotusque since the original while we have options for Arcee and there are likely those that prefer the Generations version or aren't willing to buy her a second time.

Grotusque has consistently been at the top of my G1 remake list. I have an original that's in rough shape I've had since I was a kid and have always wanted to see a modern figure of him. My one complaint is it seems like they weren't able to incorporate his (mistransformed yet cool) four legged winged cat mode into the figure, but at least they were able to make a fantastic looking upright mode. He's one figure that I will happily pay double for on eBay if I can't get one from the retailer.

Emerje
Re: Transformers Titans Return Grotusque Already Arriving, Two Days After Reveal and Release (1915328)
Posted by Nightbeat339 on October 8th, 2017 @ 9:47am CDT
I'm really hoping that TRU or wherever the figure is exclusive to gets him in stock soon. Next month's my birthday and he would definitely be at the top of my list.

Re: Transformers Titans Return Grotusque Already Arriving, Two Days After Reveal and Release (1915329)
Posted by Randomhero on October 8th, 2017 @ 9:55am CDT
yeah i posted yesterday i got mine. he shipped at noon friday and arrived around noon yesterday it was baffling.

Deadput wrote:As a Canadian will I be able to obtain Arcee and Grotesque?

Mkall wrote:So annoyed I missed out on this guy. Anyone got a second they're willing to resell?

You're better off waiting for the announcement of the partner chain. Like Arcee isn't exclusive to HasCon, Grotusque isn't exclusive to HTS or NYCC.
Re: Transformers Titans Return Grotusque Already Arriving, Two Days After Reveal and Release (1915406)
Posted by megatronus on October 8th, 2017 @ 11:25pm CDT
Does anyone else thing Grotusque bears a passing resemblance to Deathsaurus?

chuckdawg1999 wrote:Just a thought, HasCon had Arcee; NYCC had Grotusque; London comic con is coming up, Anybody thinking another exclusive?

Doubt it. Think of the Hascon exclusive as an SDCC sub, and not much has changed in the scheme of things. Would love to be proved wrong though.
Re: Transformers Titans Return Grotusque Already Arriving, Two Days After Reveal and Release (1915417)
Posted by Emerje on October 9th, 2017 @ 1:34am CDT

I can see it, really only needs new beast and bot heads to pull it off acceptably enough. Obviously the beast arms wouldn't be right and he'd have furry ankles, but I think it'd look OK. Though I think heavily modifying PotP Grimlock would work better and his combiner feet could double as Tigerbreast and Eaglebreast. That's probably asking way too much of a Voyager, though.

chuckdawg1999 wrote:Just a thought, HasCon had Arcee; NYCC had Grotusque; London comic con is coming up, Anybody thinking another exclusive?

Have they done exclusives before? Have we heard of releases of Arcee and Grotusque in England? Probably not then. Hascon is BotCon's replacement and NYCC has had exclusives in the past so it makes sense for those two to have gotten figures.

Insurgent wrote:Why am i wanting grotesque? It looks terrible, and i have no connection to the monsterbots.

Look, I didn't either but I ordered Grotesque then hit Target on the way home from work and picked up the other two so in 48 hours I went from 0 to finished. That has a hell of a satisfying feeling to it.
Re: Transformers Titans Return Grotusque Already Arriving, Two Days After Reveal and Release (1915439)
Posted by megatronus on October 9th, 2017 @ 8:53am CDT

Insurgent wrote:Why am i wanting grotesque? It looks terrible, and i have no connection to the monsterbots.

zodconvoy wrote:Look, I didn't either but I ordered Grotesque then hit Target on the way home from work and picked up the other two so in 48 hours I went from 0 to finished. That has a hell of a satisfying feeling to it.

Repugnus is adorable! I would still like a deluxe to round out the team... but it is nice to be able to 'complete' the set.
Re: Transformers Titans Return Grotusque Already Arriving, Two Days After Reveal and Release (1915506)
Posted by D-Maximal_Primal on October 9th, 2017 @ 1:26pm CDT
As many of you remember, last Thursday, Hasbro dropped a surprise bombshell on us with the revealing of a Titans Return Grotusque complete with Titan Master Fengul and Scorponok, rounding out the Monsterbot trio and the quadruplet of diecast Titan Masters. Yours truly was able to get a hold one of these figures, and I would now like to tell you why Grotusque is one of the best deluxes of Titans Return and why Scorponok is fun too.

For the official Seibertron galleries, you can check out the reveal gallery and the display gallery. You can also view G1 Grotusque for comparisons to his original form.

We will start with the bot mode, and I apologize now for the lighting of the images.

Bot mode is gorgeous, and very well painted. The bot mode is fun to look at, with the puffed out chest area complete with the beast mode lower jaw area proudly standing front and center. The colors are really loud and great on this figure, with the shoulders getting some surprisingly good attention to detail. He even has that little triangle dead center of his chest. 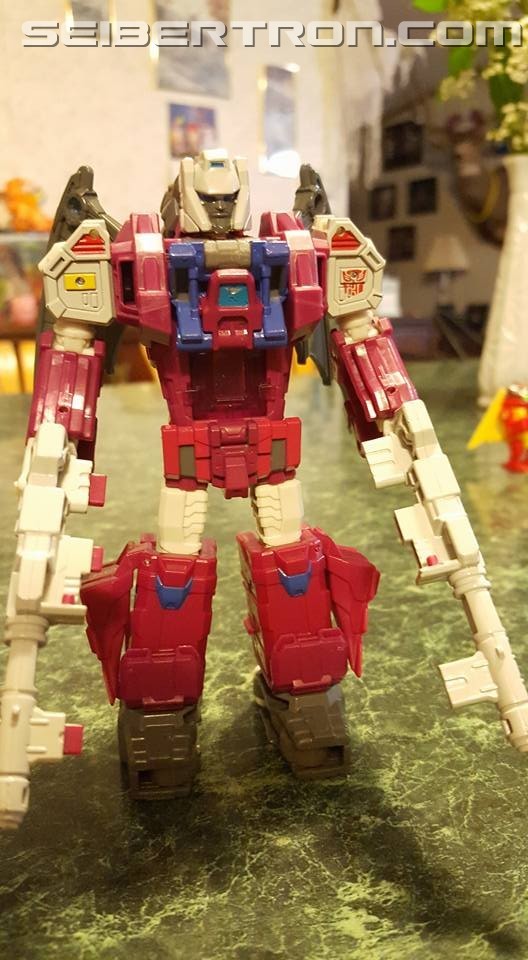 The head sculpt is pretty good, though I wish it was a little closer to the G1 toy's flirty/pouting face, but it is still nice regardless. He still does look grumpy though! 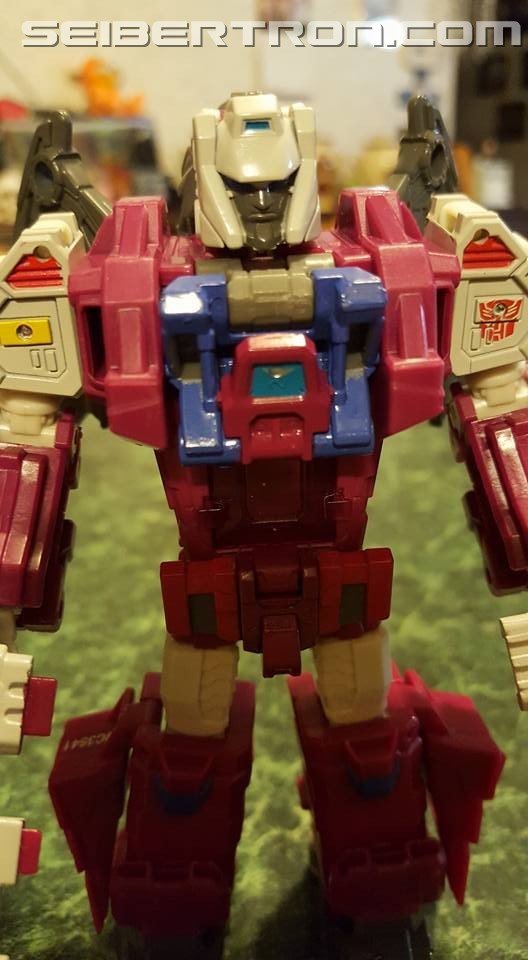 Now this mold is a retool of Titans Return Twinferno, his fellow deluxe Monsterbot. The retool is very obvious in the lower part of the body, with everything from the waist down being the same as Twinferno, just in new colors. The wings are also the same, as are the guns. The arms, head, and upper chest area, however, are new, and it really helps him stand out from his Monster-mate. The Titan Master's body is also the same, though the head is new (to be seen later). 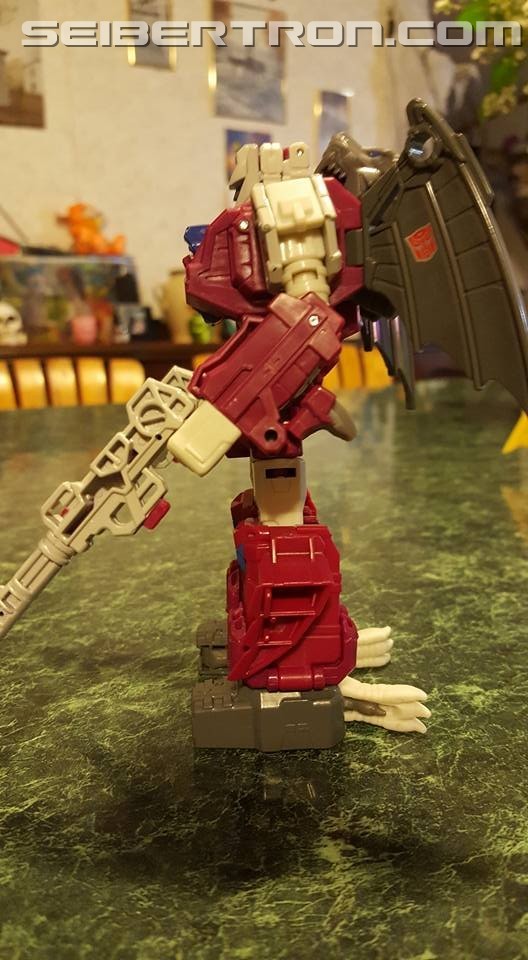 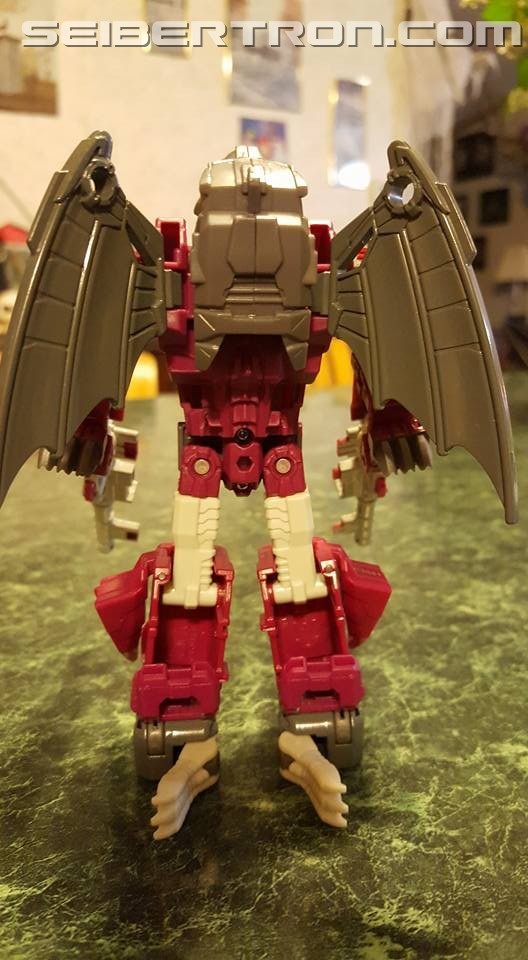 Now up first for comparisons, here we have the Monsterbot trio together at last! While it is a bummer that Repugnus is not a deluxe as well, he still looks cool enough, and you can always play musical chairs with the heads! 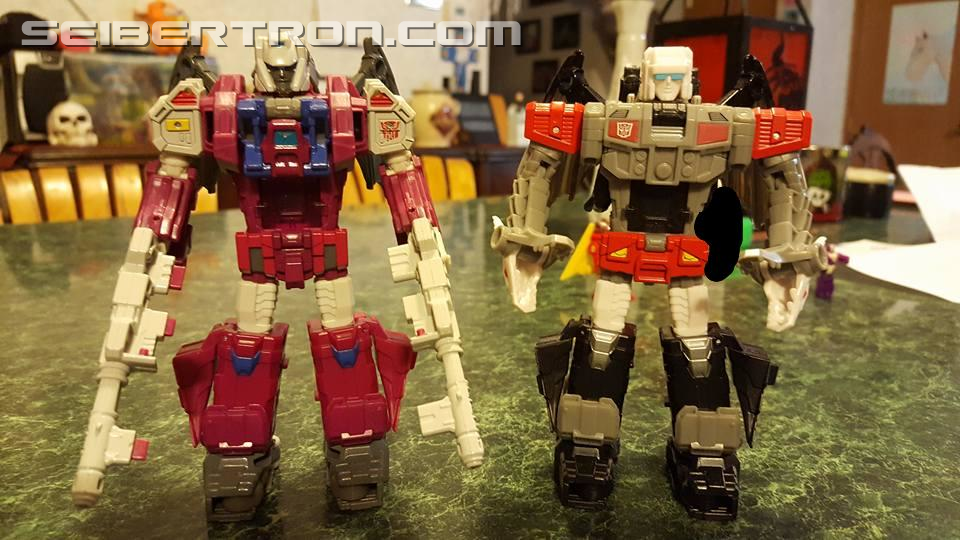 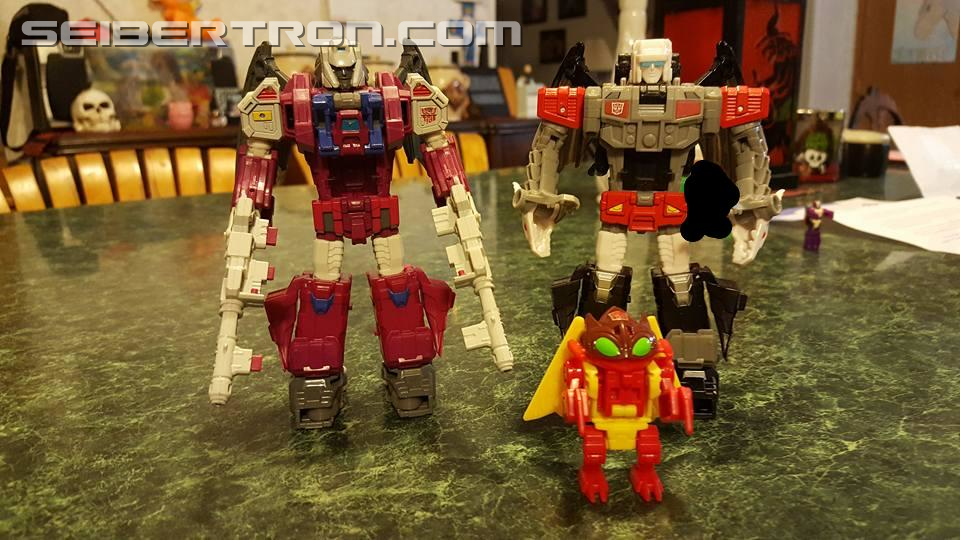 Transformation on the lower body is the same as Twinferno, but the upper body has some nice new tricks. The arms are pretty basic, rotating 180 degrees at the bicep and having some flip out beast claws, but the new beast head is where the transformation shines. the lower jaw folds out of the upper chest while the upper beast head flips up over from the back. 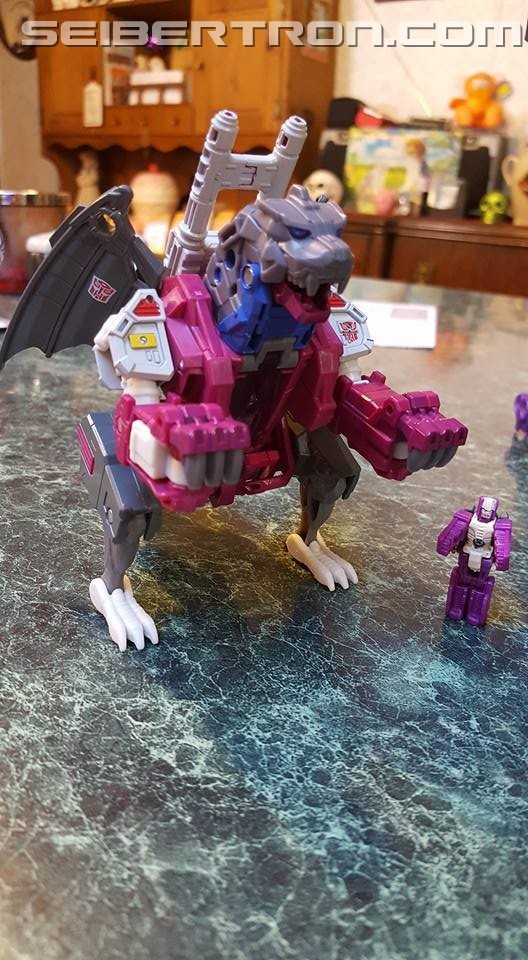 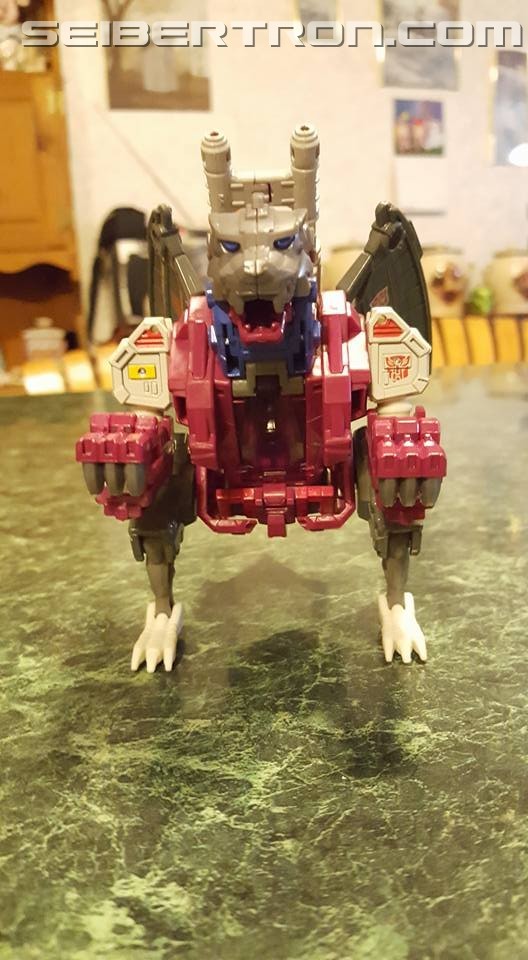 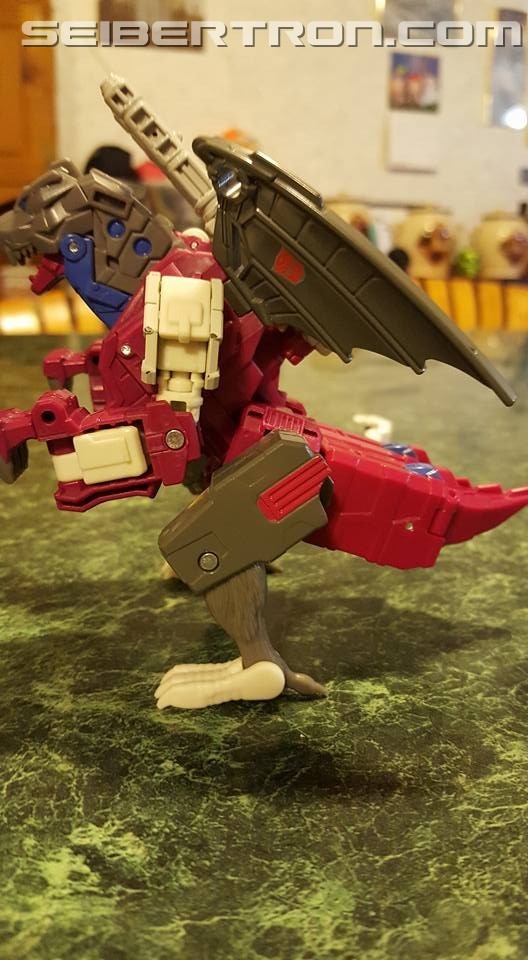 Also of note, the beast head has tabs on the side for his guns. While they can store on his back like Twinferno, you can also mount them on the beast head. This is more for robot mode storage, but it's a really funny thing you can do in beast mode! 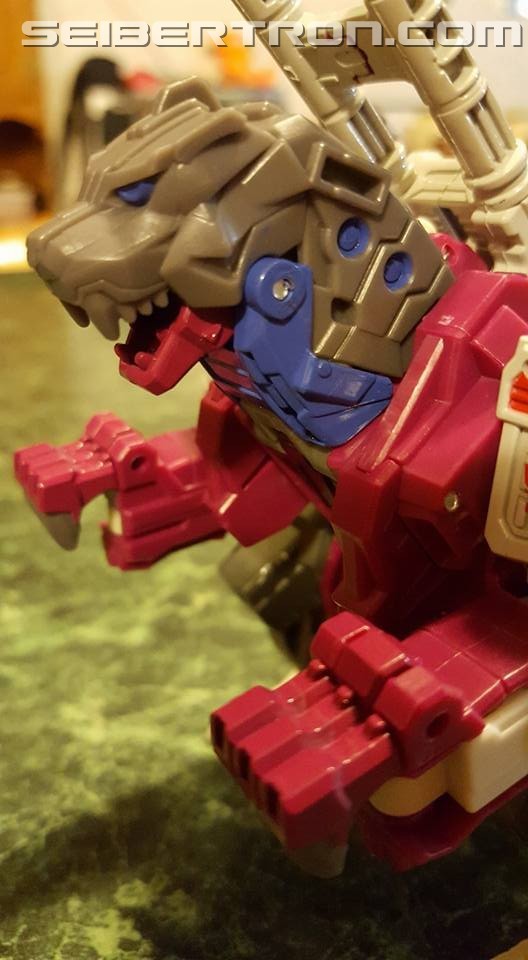 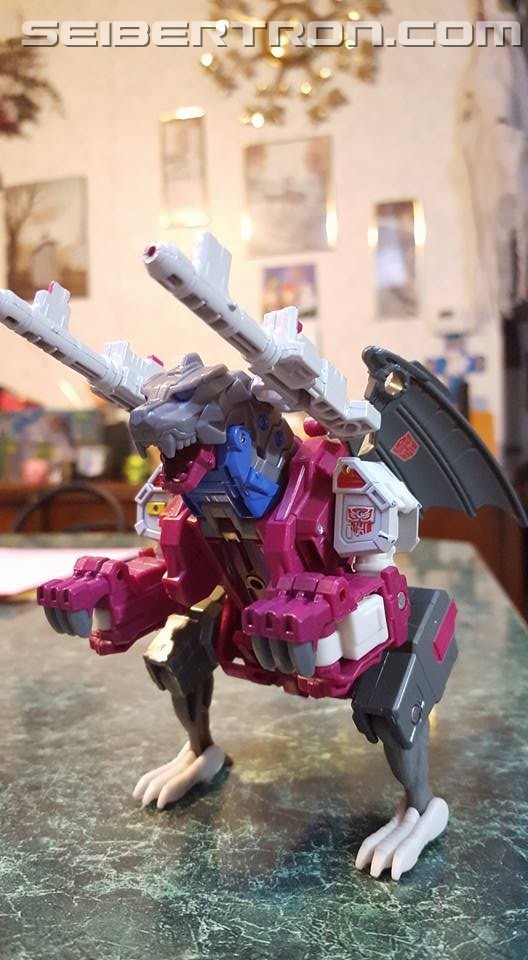 Here we have the Monsterbots in beast mode, and all 3 shine together here. They are a perfect team, and I am really glad I got to complete the team. 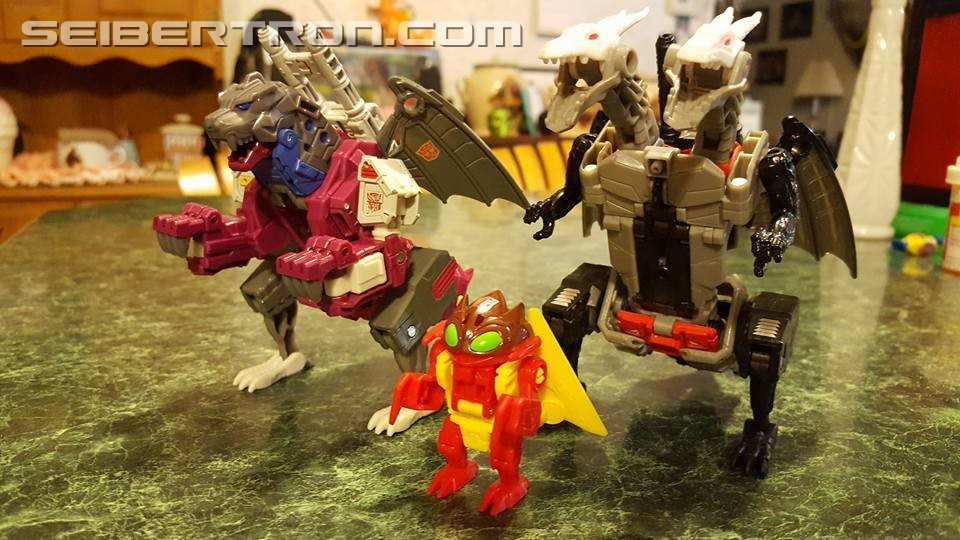 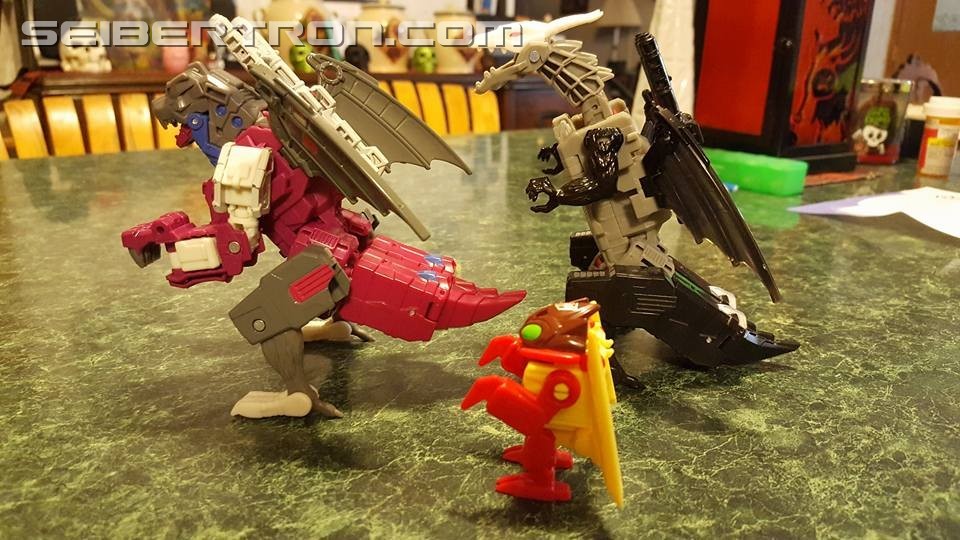 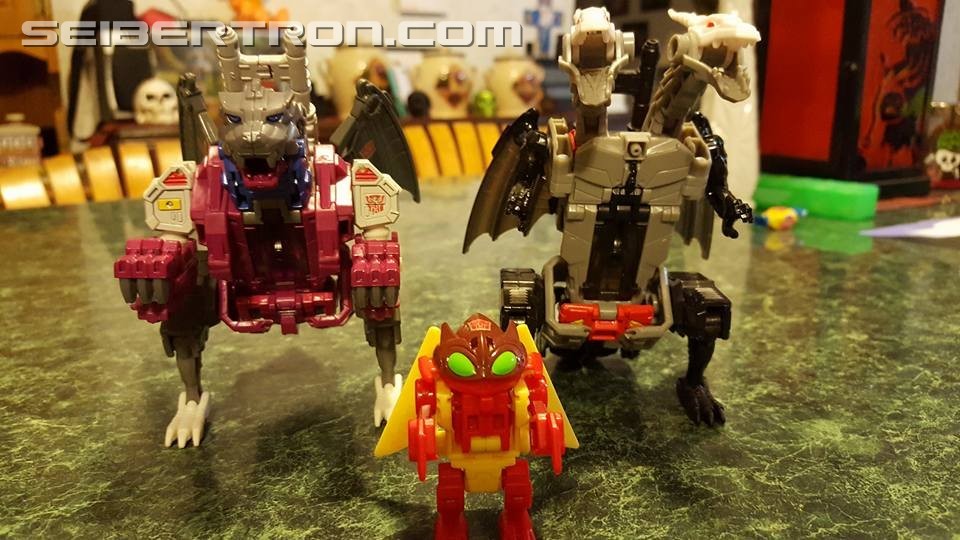 Lastly, we'll take a brief look at Scorponok, who finally got his release, and Fengul! The robot mode for Scorponok is the same as Ultra Magnus and Thunderwing, and is once again diecast. It looks pretty nice, and I enjoy the colors. Fengul is based on Daburu, Twinferno's Titan Master, but with a new head based on a saber tooth tigers, which is yet another battle beast reference! The paint work on Fengul is really good too, the best of the line.

Below, you can check out Fengul, and then a comparison with the 3 Monsterbots and Scorponoks Titan Master robot modes. 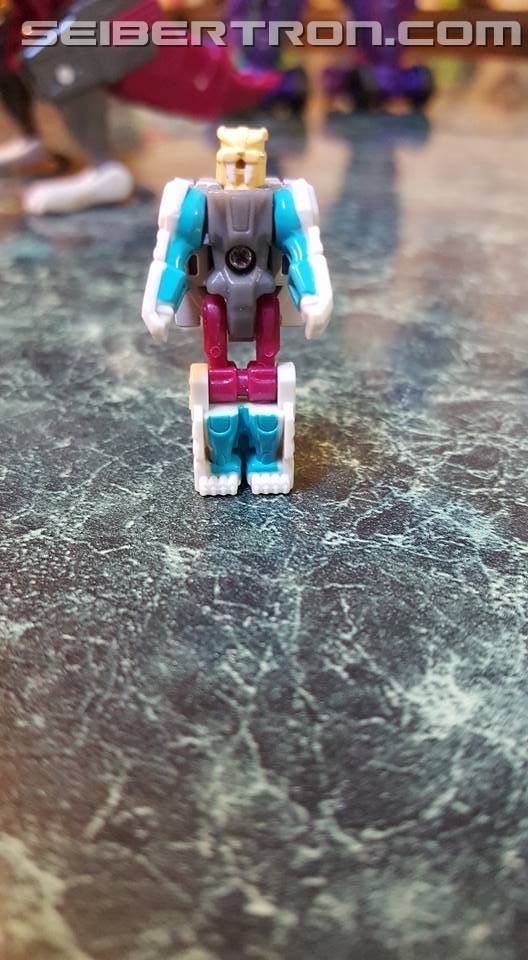 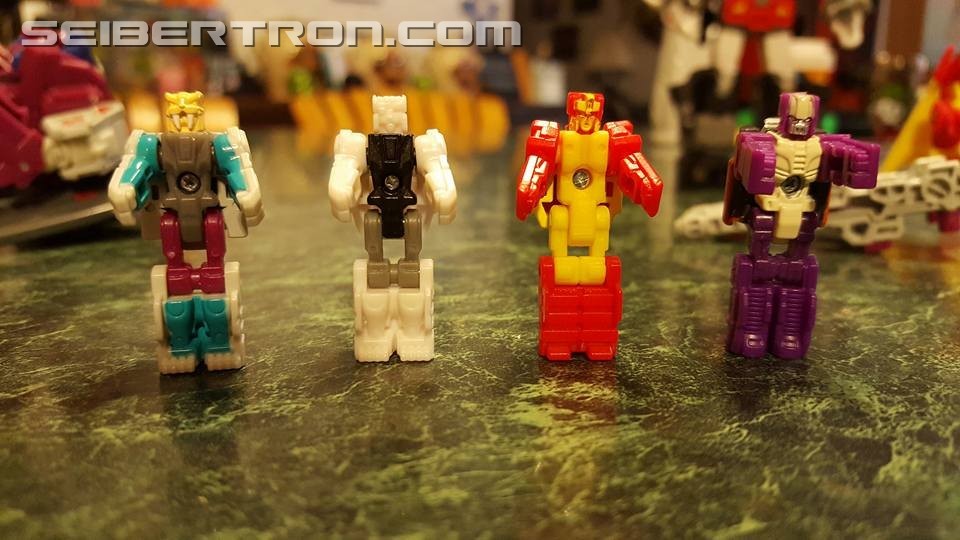 And finally today, Scorponok in head mode. It's a nice head, yet feels a bit too small, like this was a head that really needed the voyager treatment with the things deploying on either side to beef it up. The Head looks really funny on Grotusque, but really works with Tidal Wave! 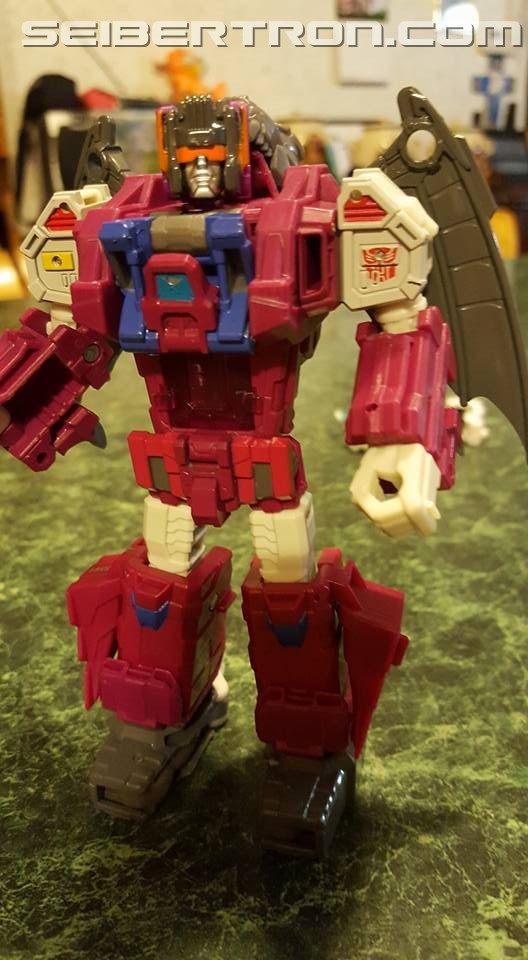 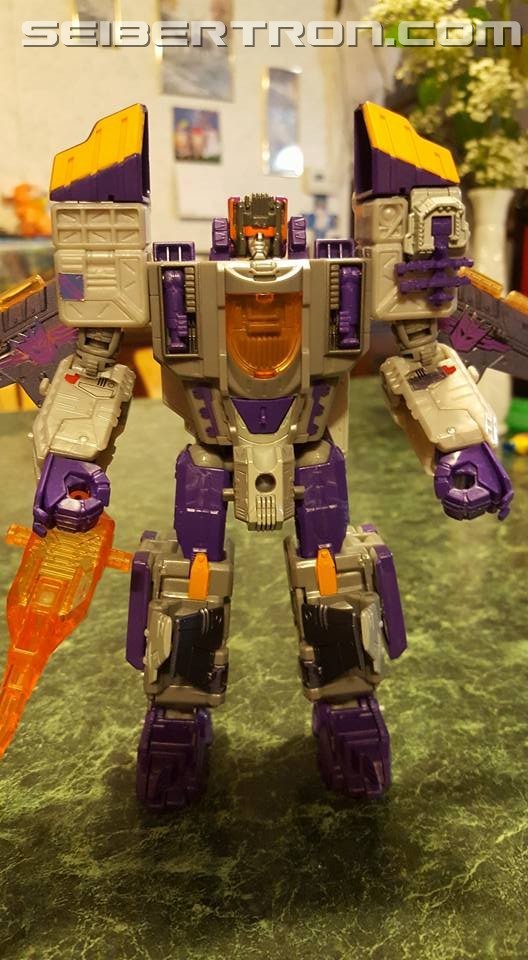 In conclusion, this whole set is a great pickup. Grotusque is the best of the Monsterbots here, and is really one of the best deluxes of the whole line. I really enjoy this figure, everything about him is dumb, fun, ugly, beautiful, and he should be a figure people actively hunt down.

Scorponok is pretty cool too. While he is not my favorite Titan Master, he is still really cool, and will be a great addition to his larger generations toy when we finally get one.

While this set was only available for about an hour on HasbroToyShop last Thursday, it will be available again online soon, much like Arcee, so keep your optics tuned for all the latest Grotusque and Scorponok news here!

Also, thanks to Stuartmaximus, we have word that Peaugh uploaded his video review for the Grotusque set, if you would like to check that out as well.