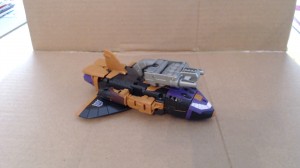 Seibertronians, we've got a new review for you! This time it's of the new Takara Unite Warriors Blast Off figure, straight from Seibertronian Chuckdawg1999!
This is the from-scratch figure included in Takara's Unite Warriors Bruticus box set. Check out Chuckdawg's review and comments down below, and make sure to check out Seibretron's gallery of the Hasbro version here!.
Does this review change your mind on the Takara Bruticus set? Will you be getting it, or the Hasbro version? Tell us in the comments below!

And, as always keep it tuned right here, on Seibertron.com, for the latest and greatest Transformers news!

Leave it to Takara to step up and provide a figure most fans want. Blast Off is an all new mold that completes a vintage style Combaticon team. Transformation is smooth and features the best weapon integration I've seen thus far. If you waited to get the Combaticons like I did, this figure, and the set, is worth the pick up.

I'd already canceled my pre-order for UW Bruticus because I just am not as into cartoon accuracy as Takara is. And your review helped solidify my decision. For me, though he's done with a unique mold, Blast Off just has too much mish-mash of colors (and not even cartoon and toy accurate olive green!) to look nice, to me. He's practically as tan as Swindle. Then there's the shuttle-gut. I have to admit, I like the booster/engine feet, and the head, but that's not enough to purchase a whole set when it would mostly be for him.
Re: Transformers Unite Warriors Blast Off Review (1807026)
Posted by dragons on July 20th, 2016 @ 6:48am CDT
Good blast off figure it's what set needs
Re: Transformers Unite Warriors Blast Off Review (1807091)
Posted by YoungPrime on July 20th, 2016 @ 10:49am CDT
Sorry but the bot mode looks terrible. I'll stick with the hasbro version.
Re: Transformers Unite Warriors Blast Off Review (1807104)
Posted by Optimizzy on July 20th, 2016 @ 11:44am CDT
Had they molded the figure in the same colors as the Hasbro I may have been interested...as it is...nah. But cool review.

Re: Transformers Unite Warriors Blast Off Review (1973894)
Posted by homicide on July 25th, 2018 @ 9:47am CDT
The release date for the Amazon Excl. Blast Off has changed again, it was released today, July 25. My Pre-order was charged yesterday & he's expected to arrive tomorrow!