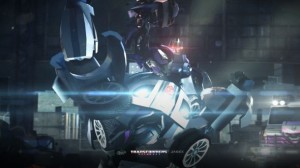 PC Gamer has an interview up with Chief Creative Officer of Jagex, Alex Horton, talking about his experiences working on Transformers Universe. Jagex is the developer working on Transformers Universe, a multi-player, class-based tactical action game. Horton talks about characters in the game, and how developers are incorporating in brand-new characters along with lesser known characters from the franchise history. He talks about how great it has been to work with Hasbro, to collaborate on new characters and bringing back some of the more obscure characters from the Transformers history.

Horton goes on to talk about how the franchise has always been about action, and how Universe will stay true to that while offering a free-to-play, browser-based gaming arena. He says that they are targeting not only core gamers and Transformers enthusiasts, but also the casual gamer. They’re striving for a game you’ll grow into; as you get deeper into the game you’ll get more into the weapons available and challenge increasingly difficult opponents.

While Horton won’t say in what capacity the most familiar Transformers will appear in, he does say that we will see them, and that they will continue to give players more information on those characters, and the game itself, in coming months. Check out the entire interview below.

PC Gamer: So you’ve created two Transformers just for the game in Conduit and Front-Line. What can they give the game that doesn’t already exist in Transformers mythology?

Alex Horton: We’ve created a ton of transformers for our game! Some are brand new, others pulled from the rich lore and history of the Transformers brand. We’ve been really fortunate to have the opportunity to build on that legacy with our own characters. What this gives us is the flexibility to create characters that are custom-built for our game, whether that’s healers like Conduit or former vigilantes like Front-Line. As we reveal more characters and more details on the game you’ll see how these characters fit the gameplay of Transformers Universe. Ultimately, it gives us the chance to build a selection of characters with complimentary and contrasting abilities.

What’s the process like of creating brand new characters in the Transformers Universe? Is there a difficult approval process with Hasbro on that sort of stuff?

Hasbro have been fantastic partners to work with on Transformers Universe. Collaborating with the team there we’ve bought our collective experiences together, combining artists, game designers and the deepest knowledge on the world of Transformers to create a great selection of Autobots and Decepticons for you to command in battle. We’ve even surprised the Hasbro guys by bringing back some seriously obscure transformers from the depths of Cybertronian time.

Can you talk about how the game has changed since its original announcement, and what led to Transformers Universe being the type of game it is now?

Our objective for Transformers Universe has been to carve out our own space in this well-established universe and, more importantly, build a game that is reflective of today’s gaming landscape, as well as working for the brand.

Transformers are about war. They’re about action. So whilst staying true to what Jagex is best at—pushing forward the free-to-play, browser-based gaming arena—we moved away from delivering “RuneScape: The Cybertron Edition” and focused on upping the emphasis on action and the different skills of a collection of Transformers Warriors. We’ve created a collaborative and competitive combat experience with deep MMO heritage. A game for today.

The Transformers are the center of the game, rather than the original notion of building your own Transformers warrior that is your avatar. That’s probably the most profound change. This idea of building out your collection of transformers– something central to toys and games. Pair that with the shorter-session, competitive experience driving the gaming zeitgeist at the moment and we really have the foundations for something special.
As a commander of this collection of Transformers warriors that you’ve recruited, you take them into battle against fellow players from around the world, playing your part in one of the oldest battles in gaming—Autobots vs. Decepticons.

You’ve said you’re targeting “core gamers, casual gamers and Transformers enthusiasts” – is it difficult to balance the game so there’s both mainstream appeal and complexity for gamers who might be familiar with similar titles to Transformers Universe?

In a word—yes. But there’s more to it than the single axis of casual to core. What we’re striving for is a game that you grow into, so as you learn more you can go deeper into the weapon systems we’ve devised and we’ll match you against tougher and tougher enemies. We understand that challenge and want to deliver an experience that is true to the brand—and that’s perhaps the strongest driver we have. We have a very experienced team made up of all kinds of gamers that understand the challenges from both sides of the process. It’s as much of a labor of love as anything else, and the team are genuinely putting heart and soul into this game, because it’s something that they believe in and have very, very fond memories of.

Obviously the game had a bit of radio silence in 2013. Were you waiting for the new Transformers movie to help you capture a bit more of that potential casual crowd?

2013 was a big year for the game. We made some major decisions during that time to ensure that we could bring the best possible product to market. We chose to maintain a silence as we knuckled down and focused on engineering a game for the long term. With a desire to bring more fluidity to play whilst maintaining our ultra-secure platform and client-server technology we opted to integrate third-party middleware with multi-platform capabilities into the way we make games at Jagex. We’re building a game service to run for the next decade, and whilst we love the movies it's not something to base the launch of our game around.

You’ve discussed that more familiar Transformers characters will appear in some capacity. Can you talk a bit about how that will work?

Unfortunately, not at this point! But I can confirm that they’ll be there, and we’ll be revealing more on them soon. We understand it’s something that players want to see and know more about—so we will be giving players all the information on these Transformers legends in the coming months.

But yeah! I am looking forward to this, from what I have seen before. The interview doesn't say much new other than the single-toned answers we've been getting prior, but hey! At least it looks like there are new images.